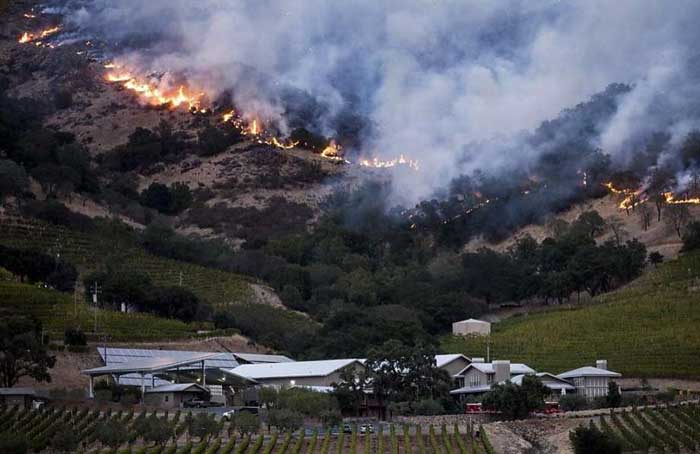 California marijuana growers north of San Francisco were facing mandatory evacuation orders as well as potentially millions of dollars in crop damage and loss amid widespread wildfires in the region.

Erich Pearson, director of SPARC Farms in Glen Ellen south of the Tubbs Fire reported on Facebook early Monday: “We are safe but these fires in Sonoma Valley are really bad. Winds are too strong and it’s too dark to fly planes. Trinity Oaks neighborhood is gone.”

He added: “Glenn Ellen is evacuated. … They’re evacuating up here too but it’s a ridge away.”

Pearson stated he was staying with employees on the Glen Ellen property who refused to leave. SPARC’s Glenn Ellen facility was preparing to harvest its annual outdoor crop Tuesday.

Long said she’s received no reports from the numerous Sonoma County cultivators with whom CannaCraft works. “I know of a lot of cultivation sites in the line of this fire.”

There might be more than 3,000 cannabis gardens in Sonoma County, according to county surveys.

The timing of wildfire season could not be worse for cannabis, because the delicate, fragrant flower buds bloom in the middle of fire season.

“Especially when it’s ripe — I can tell you from personal experience, wildfire definitely will make your cannabis have a smoky flavor to it; just like wine,” said Kristin Nevedal, executive director of the International Cannabis Farmers Association, based in the Humboldt County town of Garberville, said in a September interview.

Fire-prone Northern California harbors the world’s largest concentration of cannabis farms in the remote forested mountainsides of Trinity, Humboldt and Mendocino counties. Further south in Sonoma County, where the current Tubbs Fire is burning, many commercial medical and soon-to-be-recreational as well as personal cannabis farms also exist, along with ancillary businesses.

Beyond picking up the smell of the fires, smoke-exposed crops are more susceptible to disease, leading to unhealthy levels of mold, mildew and fungus.

Nevedal said farmers won’t know the extent of smoke damage until after the harvest season, which runs through October.

California is America’s number one domestic producer of cannabis — growing an estimated 13 million pounds per year. Four out of five of those pounds of pot grown in-state is shipped out of state, researchers estimate. Much of that pot is grown outdoors, and is planted in the Spring and harvested in the fall.

Jimmy Carter: Legalization Is Smart, Imprisonment Is Out Of Control