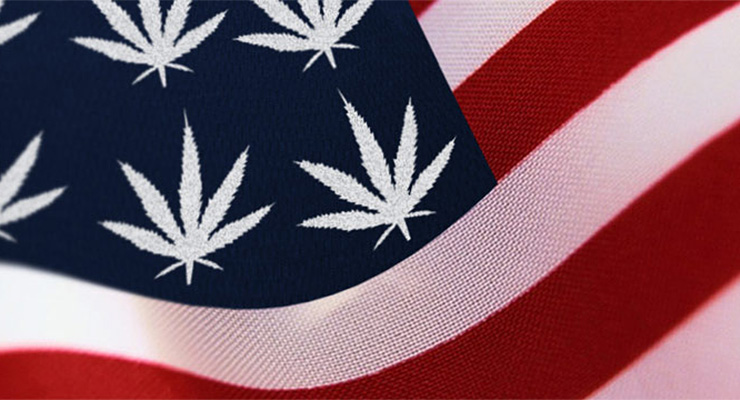 Arizona Secretary of State Michele Reagan last week certified a marijuana legalization initiative for the November ballot, setting the stage for a national election that will see the issue go directly to the voters in five states, including California, the nation’s most populous.

But those states combined only have a population of about 17 million people. Winning California alone would more than double that figure and winning all five states would triple it. If all five states vote for pot, we could wake up on November 9 with nearly a quarter of the nation living under marijuana legalization.

And that could finally lay the groundwork for serious progress on ending federal marijuana prohibition. With national opinion polls now consistently reporting majorities for pot legalization, public sentiment is shifting in favor of such a move, and if voters in these five states actually do legalize it, that sentiment will have been translated into political facts on the ground. Congress may finally begin to listen.

Still, it’s not a done deal. Voters have to actually go to the polls and vote. But all five initiative campaigns are well-funded, increasingly with marijuana industry money and are in a position to significantly outspend the organized opposition. They also start from a generally favorable polling position, with leads in most of the states. And they can now point to the examples of the earlier legalization states, where, despite dire prediction, the sky has not fallen, and state treasuries are growing fat with pot fee and tax revenues.

Of the five states that will take up legalization in November, four have initiative campaigns organized under the imprimatur of the Marijuana Policy Project, whose “Regulate Marijuana Like Alcohol” campaign proved so successful in Colorado. California is the one exception, with its initiative written by a group around tech billionaire Sean Parker and heavily influenced by the recommendations of the Blue Ribbon Commission on Marijuana Policy led by Democratic Lt. Gov. Gavin Newsom.

Here are the five states and their initiatives:

1. Arizona – Proposition 205. Sponsored by the Arizona Campaign to Regulate Marijuana Like Alcohol, the initiative would allow people 21 and over to possess up to an ounce of marijuana and grow up to six plants “in an enclosed, locked space within their residences.” It would also create a state agency, the Department of Marijuana License and Control, to oversee legal, licensed marijuana commerce, but would limit the number of marijuana retail shops to one-tenth the number of liquor store licenses, which would be fewer than 180. The measure would allow localities to regulate or ban pot businesses, and it would impose a 15% excise tax on retail sales, with 80% of revenues earmarked for schools and 20% for substance abuse education. The measure does not allow for public use and does not remove existing penalties for possession of more than an ounce or six plants. That means possession of 28 grams is legal, but possession of 29 grams is a felony. The measure does not provide employment rights for marijuana user and it does not change the state’s bizarrely strict drugged driving law, which criminalizes the presence of inactive marijuana metabolites, but does not require actual impairment to be proven.

The campaign has raised $2.2 million so far and may need to spend every cent to win. An April poll had Arizonans rejecting legalization 43%-49% and a July poll had legalization losing 39%-52%. Those numbers are going to be tough to overcome, but with normally rock-ribbed red state Arizona shifting to battleground state status this wacky election year, the state could be a pleasant surprise come Election Day.

2. California – Proposition 64. The Adult Use of Marijuana Act (AUMA) initiative sponsored by Yes on 64 would allow people 21 and over to possess up to an ounce of marijuana and grow up to six plants, keeping the fruits of their harvest. It would also allow the unregulated gifting of up to a quarter-ounce of marijuana. The measure would also allow for licensed on-site marijuana consumption, or “cannabis cafes.” It would allow for legal marijuana commerce regulated by a new Bureau of Marijuana Control, which would replace the existing Bureau of Medical Marijuana Regulation, and would impose a 15% retail sales tax and a $9.25 per ounce cultivation tax imposed at the wholesale level. In a nod to the state’s existing ma-and-pa pot growing industry, the measure would license “micro-grows” (under 10,000 square feet), but would not allow “mega-grows” (more than ½ acre indoors or 1 acre outdoors) until 2023 at the earliest. Most remaining criminal offenses around marijuana would be reduced from felonies to misdemeanors. Cities and counties could opt out of marijuana commerce, but only by a vote of residents, and they could not ban personal possession or cultivation. The measure provides no employment protections for consumers and does not change existing impaired driving laws.

The campaign has raised $7.1 million so far, including $1.5 million from Sean parker, $1 million from We*dmaps founder Justin Hartfield, and significant contributions from the Marijuana Policy Project and Drug Policy Action, the campaign and lobbying arm of the Drug Policy Alliance. Fundraising is far exceeding the organized opposition, but in a state with a huge population and massive media markets, the campaign will need to double or even triple what it has raised so far.

3. Maine – Question 1. Sponsored by the Maine Campaign to Regulate Marijuana Like Alcohol, the measure would allow people 21 and over to possess up to 2 ½ ounces of marijuana, six flowering plants, and 12 immature ones. People could also give up to 2 ½ ounces or six plants to other adults without remuneration. The measure would allow legal marijuana commerce regulated by the Department of Agriculture, Conservation and Forestry, with a 10% retail sales tax. The measure would also allow for on-site consumption, or “cannabis cafes,” but would require that all pot purchased at such facilities be consumed there. Localities could regulate or ban commercial marijuana facilities.

Campaign supporters have only raised $692,000 so far, but Maine is a small state with a low population and isn’t going to require millions to run a campaign. As in other initiative states, Maine opponents are trailing badly in fundraising, but will probably get some financial assistance from the prohibitionist Smart Approaches to Marijuana, which has vowed to put $2 million into the effort to defeat the five initiatives. Most of that money won’t be going to Maine, though.

The polling numbers so far are encouraging, with a March MPRC poll showing 53.8% support and a May Critical Insights poll coming in at 55%. Those numbers aren’t high enough for campaigners to rest easy, but they do suggest that victory is well within reach.

4. Massachusetts – Question 4. The measure sponsored by the Massachusetts Campaign to Regulate Marijuana Like Alcohol would allow people 21 and over to possess up to an ounce of marijuana in public or 10 ounces at home, as well as allowing the cultivation of up to six plants and the possession of the fruits of the harvest. It would allow legal marijuana commerce regulated by a Cannabis Control Commission, and it includes a provision that would allow on-site consumption at licensed facilities, or “cannabis cafes.” Localities would have the option of banning legal marijuana commerce enterprises. The measure would impose a 3.75% excise tax in addition to the state’s 6.25% sales tax, making an effective tax rate of 10%. Localities could add local taxes of up to 2%, but they certainly couldn’t collect them if they didn’t allow marijuana businesses to operate. There are no employment protections for pot smokers, and the state’s drugged driving laws would remain unchanged.

Funding looks to be lagging in the Bay State, where supporters have only raised $500,000, less than in Maine, which has a significantly smaller population. Organized opposition in the form of the Campaign for a Safe and Healthy Massachusetts may be the strongest of any of the five states this year, with the governor, the mayor of Boston, and other leading public officials on board.

The polling suggests this will be a very tight race. A July 2014 poll had the state evenly split, with 48% supporting legalization and 47% opposed, polling from last year was showing slight majorities for legalization. But a May poll had only 43% support, with 45.8% opposed, and a July poll had legalization at 41%, with 50% opposed.

5. Nevada – Question 2. Sponsored by the Campaign to Regulate Marijuana Like Alcohol in Nevada, the measure would legalize the possession of up to one ounce by people 21 and over and would allow people to grow up to six plants – but only if they live more than 25 miles from a retail marijuana store. The measure also creates a system of licensed marijuana commerce to be overseen by the state Department of Taxation. The measure would impose a 15% tax on wholesale marijuana sales, and retail sales would be subject to already existing sales taxes. The measure contains no provisions for on-site cannabis consumption, does not alter existing impaired driving laws, and does not provide employment rights for pot smokers.

The campaign has raised more than $1 million so far, including $625,000 from people in the marijuana industry. But it also faces significant opposition in the person of conservative money-bags Las Vegas casino magnate Sheldon Adelson, who gave $5 million to the campaign to defeat the 2014 Florida medical marijuana initiative. Adelson hasn’t so far kicked in directly to defeat Question 2, but he has bought the state’s largest newspaper, the Las Vegas Review-Journal, and flipped its editorial position from supporting legalization to opposing it.

Polling on the initiative campaign is scarce, but encouraging. A KTNV/Rasmussen poll just two weeks ago had the measure winning, 50% to 41%.

And there you have it. Given all the information available, our best estimate is that California is most likely to win, followed by Maine and Nevada. Arizona looks like the toughest nut to crack, followed by Massachusetts. Wewill know by the time the sun rises on November 9. 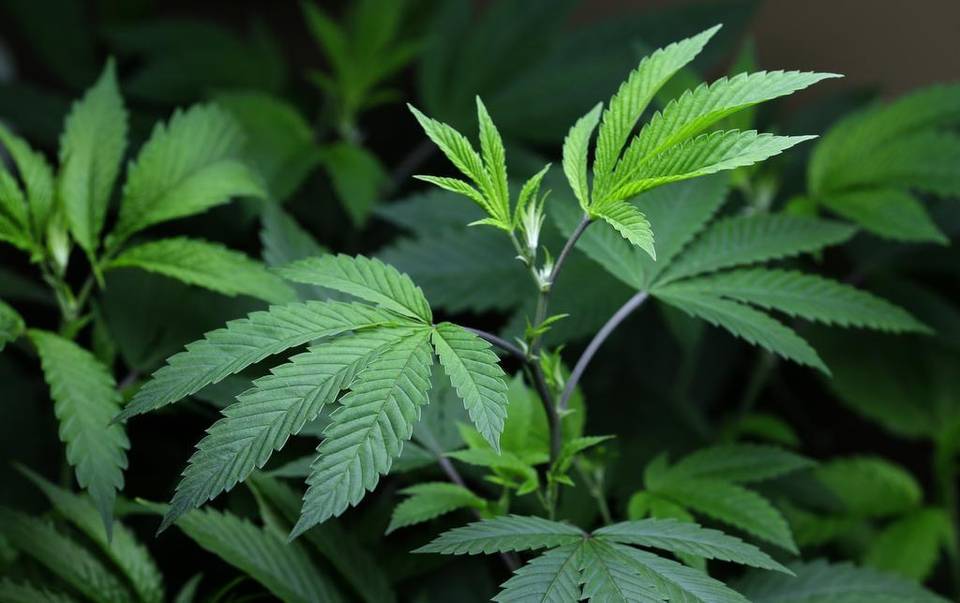