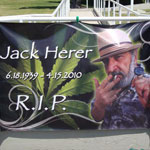 “I bet you’ve never seen a service like this before,” Dan Herer quipped.

The crowd erupted in laughter as everyone simultaneously acknowledged the situation: 420 plus people, old American Hippies and yuppies alike, jam-packed in a pristine Jewish chapel, an old discerning Rabbi quietly waits in the background while people take turns raving about the unjust persecution of Cannabis users, and billows of savory and balmy smoke waft in from the mourners ‘sparking one up’ outside.

On Sunday afternoon, at Eden Memorial Park, legendary Cannabis activist, author and beloved proselytizer of the universal benefits of Hemp, Jack Herer, was laid to rest; and true to his legacy, the ceremony was anything but taciturn.

Long time friends, family, and cohorts took to the chapel’s podium to share their fondest memories and anecdotes with those whom packed the aisles and gathered outside the doorways, as well as to the world at large as greenerfest.com streamed the ceremony live. Herer’s family members intimately disclosed the profound impact that he had on their lives, while his biggest supporters and comrades passionately praised his humanitarian efforts and willful determination.

“Jack had few wives, many lovers, but always was a father,” son Dan Herer prefaced as he recounted his experiences as a son forced to share his loving father with the demanding schedule of being the front runner of the movement to legalize Hemp.

Granddaughter Hannah Herer expressed her gratitude for the boundless enthusiasm and kindness which her grandfather continued to receive from his loyal public, asserting that although he traveled a lot, he always loved coming home to family and showering her with “sloppy kisses” whenever they would get together. Indeed, Herer was a man of the people, and those closest to him knew that his steadfast and dedicated position within the Cannabis movement brought as many difficult sacrifices as fruitful rewards.

Bittersweet sobs periodically filled the warm spring air as mourners grappled with their loss, but the overall atmosphere of the tribute was more celebratory than melancholy.

Chris Conrad, expert legal Cannabis witness and good friend, who first met Herer when he challenged the Hemp Industries Association committee in the late 80’s, willfully took to the stage and demanded that we not consider Jack Herer’s passing as the end of an era, but as a call to arms; to carry out his legacy by continuing to fight for all that Herer worked so diligently and passionately to fulfill.

“I was the Tonto to his Lone Ranger,” explained friend George Clayton Johnson, who underscored Herer’s unrelenting tenacity regarding his convictions, and his infamously benevolent stubbornness even with close friends and peers, by stating that Jack Herer had “a heart as big as all outdoors,” however, “if you didn’t ever fight with Jack, then you didn’t know him!”

The funeral procession moved to the top of the rolling green hills of Eden Memorial after the massive collective used up the maximum time allocated in the chapel for prayers and testimonials to pay final respects to Jack Herer before interning his ashes. The scenic view of the Los Angeles Valley was accompanied by the sweet, aromatic smell of dozens of joints being sparked in Herer’s honor.

Mourners took additional time to pay their respects and discuss Herer’s legacy as family and friends one by one placed soil, trinkets, greens and gifts into the tomb. A memory of time shared in a jail cell was followed by a beautiful bud being placed for eternal entombment. Tales of catching police enforcement in their ignorancy and then enlightening them about the history of Cannabis before being released, followed by a plethora of dried Cannabis leaves gently falling to their final resting place with Herer. The young and old took turns doing their part in the interring, shoveling heavy soil as they openly wept and embraced.

The energy emanating from the love and support on the mountaintop that day resonated throughout the universe. As a man who first chastised his wife in the 60’s for smoking a joint and then went on to become the most iconographic and influential Cannabis activist in the world, Herer has not only demonstrated that knowledge is power, but that advocating the truth about Cannabis is a responsibility of ours to which we do not carry in vain. Long live the Hemperor.

If you would like to contribute fiscally to help cover Jack’s growing medical and funeral expenses, please make a donation here.