Barack Obama inhaled. Frequently, happily and allegedly quite greedily. Various websites published excerpts on Friday from an upcoming book on the U.S. president containing fresh details about his enthusiasm for marijuana as a young man, adding a bit of levity to a close and increasingly nasty presidential race. “Barry also had a knack for interceptions,” according to just one anecdote in David Maraniss’s “Barack Obama: The Story,” slated for release in mid-June.

“When a joint was making the rounds, he often elbowed his way in, out of turn, shouted ‘Intercepted!’ and took an extra hit.”

When he attended Punahoa prep school in Honolulu in the ’70s, Obama was also at the forefront of ensuring he and his high school pals — known as the Choom Gang, with choom a Hawaiian slang verb for smoking weed — got the most bang for their buck.

“When they were chooming in the car, all the windows had to be rolled up so no smoke blew out and went to waste; when the pot was gone, they tilted their heads back and sucked in the last bit of smoke from the ceiling.”

The revelations were met with glee in the Twitterverse and beyond.

Buzzfeed entitled its post on the revelations “A User’s Guide to Smoking Pot with Barack Obama,” while a Twitter wag joked that the Republicans now had potential ammunition in hand.

“If GOP was pro-pot legalization, they could run against President ‘Bogart’ Obama; it’s a real character issue,” tweeted Michael Roston, the home page producer at the New York Times’ website.

Bogarting is a term that means hogging joints.

In a country where increasing numbers of Americans think weed should be legalized, few believe the revelations will hurt Obama just six months before the presidential election, even though it’s doubtful Mitt Romney, the buttoned-down Republican front-runner, has ever taken a bong hit.

“I don’t think these stories are going to move anyone on this issue, one way or another,” Ethan Nadelmann, the executive director of the pro-legalization Drug Policy Alliance, said in an interview Friday.

“Part of what made him appealing to young people four years ago was his frankness on marijuana, and his joking around when asked if he inhaled by saying: ‘Wasn’t that the point?’ It made him seem a bit more hip, someone young Americans could connect to.”

A Rasmussen poll released earlier this week found that 56 per cent of Americans believe it’s time to decriminalize pot and regulate it like alcohol and cigarettes. A poll by Gallup last fall suggested a similar trend, with Americans favouring legalization far out-numbering those opposed.

“The Rasmussen poll was a stunning result; it was definitely encouraging,” said Nadelmann.

That’s why Obama’s lack of action in terms of legalizing marijuana has been such a disappointment, he added.

The Obama administration has launched a multi-agency crackdown on cannabis that has included more than 100 raids, mostly on California medical marijuana dispensaries, despite the fact that many of them were operating in full compliance with state laws.

In a recent interview with Rolling Stone magazine, Obama denied his administration’s actions were at odds with his position when running for president, when he vowed not to use Justice Department resources to circumvent state laws on medical marijuana.

“What I specifically said was that we were not going to prioritize prosecutions of persons who are using medical marijuana,” Obama told Rolling Stone.

“I never made a commitment that somehow we were going to give carte blanche to large-scale producers and operators of marijuana — and the reason is, because it’s against federal law …. I can’t nullify congressional law.”

“He has been either silent or problematic on marijuana,” he added. “And when you see the polls, whatever political calculation he’s making is either naive or unprincipled.”

Unlike Bill Clinton, who admitted to smoking weed while running for president but famously denied inhaling, Obama has always been open about the fact that he toked in high school and college.

He even wrote about smoking pot in his memoir, “Dreams From My Father,” but didn’t go into the type of detail alleged in the Maraniss book.

A choice excerpt details the penalties meted out by the Choom Gang by anyone who exhaled too soon.

“When you were with Barry and his pals, if you exhaled precious pakalolo (Hawaiian slang for marijuana, meaning ‘numbing tobacco’) instead of absorbing it fully into your lungs, you were assessed a penalty and your turn was skipped the next time the joint came around,” Maraniss writes.

“Wasting good bud smoke was not tolerated,” explained one member of the Choom Gang. 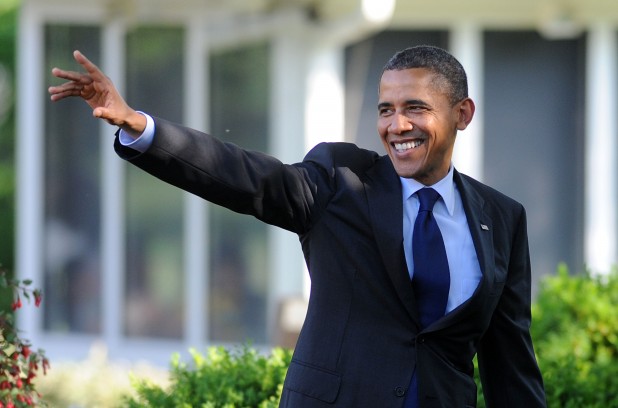