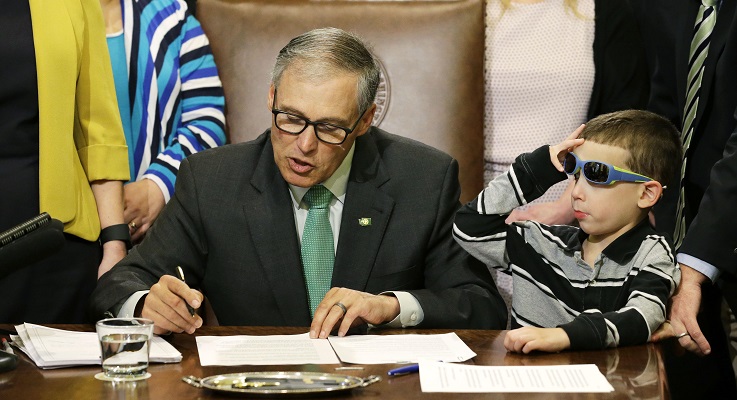 Ever since the passage of the Washington state recreational marijuana initiative I-502, activists, those with marijuana business interests and the state have been in a fierce and growingly contentious battle to bring the medical industry under some kind of regulation. After July 2014, when the recreational market actually became transactional, most officials began to advocate for the medical sector to be consolidated under the regulatory guidelines and taxation structure set out for the recreational industry.

It’s problematic that the rules on who will be taxed are still in flux. The state now not only considering eliminating all business taxes (which were heavily and clumsily applied, with a 25% tax on every stage of the production process plus sales taxes) but also pushing the burden of taxation on all consumers, medical or not.

The consolidation of the industry under one set of regulations in Washington State has now become reality. In a bill, introduced by Republican Senator Anne Rivers and championed by the Republican majority, the medical vertical in the state is now to be subsumed under rules and regulations created for recreational users and those who cater to them. Medical users will be forced to shop in recreationally-oriented outlets regulated by I-502 by 2016. They could also be subjected to sales tax of up to 37% if they use THC.

This has set off a storm of criticism around the country, from both advocates to the cannabis business community. Christopher Brown, the press secretary for Americans for Safe Access, a patients’ rights organization who lobbied hard for medical users on this effort, is none too pleased.

“This bill was a tough fight for us, and we definitely didn’t get everything we wanted,” he said. “On the plus side we were able to get several improvements made during the legislative process and we were glad that Governor [Jay] Inslee vetoed the section that created new felony offenses.”

“The idea behind this proposal is to unify the medical and adult use programs that currently coexist in Washington,” said Kris Krane of 4Front Advisors, which invests in the marijuana vertical. “While it is understandable that the state might want to integrate these two systems, the proposed solution has proven controversial.”

The biggest concern for all is that the new law will also force most if not all existing medical facilities to shut down. “This could result in many patients no longer having access to the strains and products they have grown accustomed to, and could result in many current medical operators who have a deep and longstanding understanding of patients’ needs being forced out of the market, taking their valuable expertise with them,” Krane explained.

According to Derek Peterson, CEO of Terra Tech Corp (TRTC), a public marijuana company, there is a finite difference between a medical patient and a recreational customer and the most appropriate regulation is one that addresses both consumers.

“Responsible legislation equals responsible business and this industry needs to managed under two umbrellas,” he said. “Medical patients have a need while recreational consumers have a desire for cannabis and the regulation should approach it from the end user backwards.”
It is clear there is going to be more lobbying to ameliorate some of the worst impacts of the new consolidation of the state vertical from just about everyone. According to Krane, “If there is any wiggle room left in the negotiations, this would be a good time to lobby to allow existing medical dispensaries to transition to an adult use license. Short of that, it would be wise to start networking and meeting with operators of the approved adult use dispensaries.”

Patients in Washington will also have to sign up for a patient registry. This will, theoretically, allow them to purchase more marijuana at a time without being subjected to adult use taxation rates. “Patients have never had to put their names on a list in Washington before, and many are understandably wary of having to do so now just to continue to be able to access medicine they have been accessing for many years,” said Krane.

Many advocates, in fact, are worried that problems with access, and many of the ideas still on the table such as medical use taxation, will drive patients back into the black market. For this reason, all eyes are still on Washington state.
According to ASA’s Brown, the fight is far from over. As he said, “In the coming months we’ll continue to work for improvements, including fighting against steep taxes that will harm patients.”

For now, as the battle continues to shape the new medical face of the law, the example of legalization in Washington State may also serve less as a model of “state experimentation,” and more of a failed case study of not only marijuana legalization but the repeatedly botched downstream regulation of an entire state industry.