With Election Day just around the corner, here’s an update on the status of marijuana legalization efforts around the country.

Here are the states that could vote on marijuana-related ballots in 2016.

“Voters in one out of five states will be deciding on marijuana policy this November,” Paul Armentano, the deputy director of NORML, told ATTN:. “This reality is indicative of the unprecedented level of public support that now exists for regulating cannabis, but it is also representative of the failure of elected officials to move forward on behalf of their constituents to support common sense marijuana law reforms.”

The Arizona Regulation and Taxation of Marijuana Act would allow adults 21 and older to purchase, use, and grow a limited amount of marijuana.

The 2016 Arkansas Medical Cannabis Act would create a medical marijuana system that would allow patients with qualifying medical conditions to obtain marijuana at select dispensing facilities.

The Adult Use of Marijuana Act would establish a recreational marijuana system in California that would allow adults 21 and older to purchase cannabis at for retail sale. A 2016 poll from Probolsky Research found that 60 percent of California voters support the initiative.

The Use of Marijuana For Debilitating Conditions amendment would allow patients with qualifying medical conditions to purchase and possess cannabis. A statewide poll found that 68 percent of Florida voters back the amendment, which requires 60 percent of the vote to pass.

The Marijuana Legalization Act would allow adults 21 and older to posses, cultivate, and consume marijuana for personal use. It would also create a legal retail system for recreational marijuana sales.

The Regulation and Taxation of Marijuana Act would allow adults 21 and older to possess up to an ounce of marijuana and grow up to six plants for personal use.

The Michigan Marihuana Legalization, Regulation and Economic Stimulus Act would allow adults 21 and older to cultivate, possess, and consume a limited amount of marijuana. It would also establish a system for the commercial production and retail sale of cannabis. A ruling by Michigan’s Secretary of State invalidated a number of signatures for the petition, leading campaigners to request a review from the appellate courts. As such, this proposal is not officially on the ballot.

The New Approach Missouri would allow patients with qualifying medical conditions to obtain and use cannabis. It would establish a statewide system for producing and selling medical marijuana and includes a four percent retail tax. All excess revenue (i.e. anything more than the cost of regulating the program) will go toward services that benefit Missouri veterans.

The Montana Medical Marijuana Initiative would eliminate certain regulations on the state’s current medical marijuana program, including lifting restrictions on the number of patients that each licensed provider is permitted. (The program currently allows only three patients per provider.)

The Nevada Marijuana Legalization Initiative would allow adults 21 and older to grow, own, and use marijuana for recreational purposes. It would also establish a system that would regulate marijuana sales “similar to other businesses,” according to the text of the initiative. 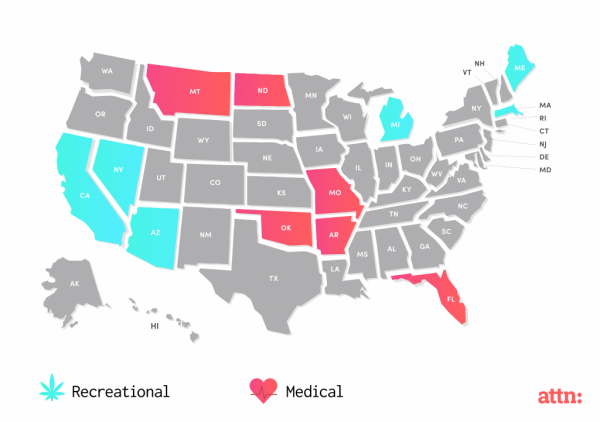