Women looking to break into the legal weed business are bumping up against a green ceiling.

“There is a huge disparity between the number of white male owners and female and minority owners in this industry,” said Ashley Corrado, founder of GRNwire, an online community for people in the cannabis industry.

The percentage of women holding executive positions in the cannabis industry has fallen about 9 percent over the past two years, according to a 2017 report “Women and Minorities in the Marijuana Industry,” by the trade news organization Marijuana Business Daily.

Chanda Macias, owner of the National Holistic Healing Center Medical Marijuana Dispensary (NHHC) in Washington, D.C., coupled her experience as a cell biologist with an MBA in supply chain management to open the dispensary three years ago.

“I definitely had a lot of challenges,” she said.

When she first opened, she could only find one supplier who would sell her just two different marijuana strains. Her competitors at the time had over 20 strains.

Financing the startup presented another set of hurdles, she said, partly because marijuana is still illegal under federal law. Those seeking to break into the industry can’t go to the bank for a loan. Options are limited to getting the money through private equity firms, Macias said.

“It’s hard for a black person just to get a home loan. To get a small business loan and then put cannabis on top of that, what you see is that it’s nearly impossible,” she said.

“For financial reasons, minorities have been excluded.”

Massachusetts regulations include a set of social equity programs in an attempt to ensure minority groups are given opportunities in the new legal industry.

Corrado said most of her members also complain about the difficulty obtaining funding in her recently launched Boston-based GRNwire.

“That’s the biggest barrier everyone is facing whether you’re a minority, a woman or you’re a small farmer,” she said.

Jennifer Culpepper, owner of Brand Joint, a cannabis branding and design agency out of Maryland, said she has noticed more women with a seat at the table since she transitioned three years ago from traditional design into the cannabis industry.

“A lot of times I was only woman in the room — and that was different for me,” she said of her early experience.

Macias, who now chairs the organization’s board of managers, originally joined after she experienced first hand a lack of diversity.

Looking for help to build her business, she attended a cannabis conference in Denver where she heard “no,” over and over again until she went up to the only other black person in the room. That person gave her the first two strains she started her business with.

“Can you say with 100 percent assurance that it all attributes to me being a woman or a black woman? I can’t say definitively,” she said.

“But the only person I know that I approached and gave me feedback was another black man. That’s not the first and it won’t be the last time that’s happened.”

Rosario Dawson Is On A Mission 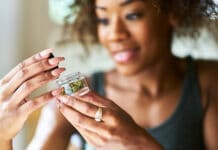 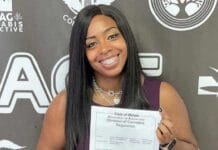