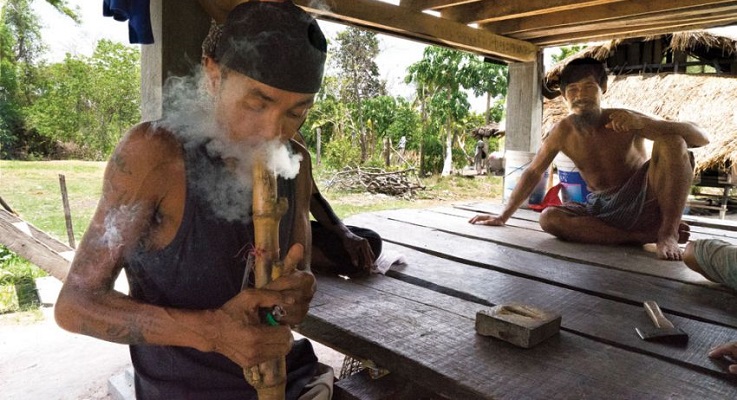 Cambodia has a complicated relationship with cannabis. While it’s technically illegal, the authorities make exceptions for traditional and medicinal use. But now with a global trend away from prohibition, some suggest it’s high time the government here followed suit

As farmers across Cambodia take to their fields this month in anticipation of the rainy season, in a sleepy village in Battambang’s Moung Ruessei district, some are sowing a crop alongside their rice and cassava that’s just as traditional but much more controversial.

“Here, ganja is just like in Jamaica,” said Ratanak*, a 42-year-old farmer, after inhaling a lungful of thick, pungent cannabis smoke from a bamboo water pipe.

“Because we don’t grow much – maybe 10 to 15 plants – [the authorities] let us grow it,” he said, adding that police had never requested bribes from him over his activities.

Vireak*, a cassava farmer in his fifties, said that he had smoked marijuana daily since settling in the area after the civil strife of the mid-90s ended.

While he maintained a few plants in his personal vegetable garden year round, he and his neighbours planned to plant most of the annual crop in the Cardamom Mountains – one of the Kingdom’s epicentres of illicit cannabis production.

“In the night time in the mountains, with the dew, it helps the plant grow a lot of buds,” Vireak said.

Cambodia has a complicated relationship with cannabis – which is believed to have been cultivated and used for medicinal, culinary and recreational purposes here for hundreds of years – and amid global moves away from prohibition of the drug, there are suggestions that the government should follow suit.

On paper, it’s still illegal – in accordance with the Single Convention on Narcotics treaty passed in 1961 – and in recent weeks, police have busted at least four large-scale marijuana growing operations, including almost 8,000 plants discovered amid a sesame crop in Pursat.

But in Kandal province’s Kien Svay district this month, when police discovered a crop hidden in a 48-year-old woman’s papaya fruit patch, they let her off with a warning when she claimed she was HIV-positive and was using the drug for medicinal purposes.

And, of course, in Phnom Penh, dealers freely hawk marijuana on the riverside, while restaurants advertise weed-infused “happy” pizzas as they have for decades.

When asked if selling marijuana had ever landed him in trouble with the police, a street-level dealer in Phnom Penh’s Boeung Keng Kang I area laughed at the idea.*edit*

A worker at an establishment near the riverside admitted he indulged every so often and said he didn’t worry about law enforcement, but refused to go into detail about the shop’s supply chain (“We get it from the provinces”) or possible police dealings.

Another owner just smiled, shook his head and pondered why anybody would want to write about this topic as he unscrewed the top of a coffee container, revealing a large bouquet of joints.

Meas Vyrith, the secretary-general of Cambodia’s National Authority for Combating Drugs, said the law grouped cannabis alongside the “most harmful drugs” category.*edit*

“If people use it, it causes brain problems, mental problems and physical problems,” Vyrith said, adding that marijuana use was a “negative part of Khmer culture”.

Vyrith warned he had his eye on “happy” restaurants and would eventually take action.

“We are doing an investigation to punish the owners, but we need to find more evidence to take action,” he said.

Still, Vyrith said the authorities made exceptions to the law for traditional, small-scale growers in the Kingdom.

“If they grow [it] because their families and ancestors have used it, it is fine, but if they use more than that, we prevent them from growing it.”

Legendary English Vietnam War photographer Tim Page, who is now based in Australia, first visited Cambodia in 1964 on holiday and said that cannabis was ubiquitous at the time.

“Virtually every roadside cafe, truck stop or any Cambodian eatery – even major hotels – would all offer you a menu with or without ganja. If you wanted an omelette done with lots of herb, you just had to ask,” he said in a phone interview.

“We use all kinds of herbs in our cooking. For them, it was just another source of flavour, and I think they just thought it made the chicken soup cluck.”

“The quality of weed in Cambodia was better than in Vietnam,” he added.

The United Nations Transitional Authority in Cambodia that arrived in 1992 – a peacekeeping mission that marked the first time a country’s government was taken over by the UN – nominally banned marijuana, though enforcement of the law was extremely lax.

The country’s first concrete anti-drug law was passed in 1996 – the same year that the US added Cambodia to its list of “major illicit drug producing and drug transit countries”, after a recommendation from the UN Drugs Control Programme and enforcement has been ramping up ever since.

“In certain parts of the countryside, they still use it,” Page said. “It hasn’t evaporated, but you have to be in a village at the right time.

“It was much more common than it is today. It’s not considered a good social habit any more. You don’t want granddad sitting in the corner smoking a water pipe.”

Page pointed out the irony of Cambodia stamping out the traditional use of cannabis at the US government’s behest while many US states were now moving away from prohibitionist policies.

“It’s legal right across America, so why is it illegal in Cambodia?” he said.

Four US states have so far legalised recreational marijuana use, but many allow its use for medicinal purposes with a prescription.

John Collins, coordinator of the London School of Economics’ IDEAS International Drug Policy Project, said legalisation of marijuana in some parts of the US had called into question the 1961 convention’s credibility.

“What you’re seeing now, because states in the US are legalising marijuana, [countries] are saying ‘Well, these conventions aren’t as rigid as we thought they were, and now the states can decide how they want to enforce it’,” he said, adding that US pressure was largely the reason for marijuana’s global criminalisation in the second half of the 20th century.

“Traditionally, the US was an exporter of the prohibition model,” he said.

Collins, who described marijuana as “not a particularly dangerous drug”, said Cambodia’s more hands-off approach to cannabis was preferable to aggressive enforcement.

“If you start throwing people in jail for marijuana, that’s a pretty big disaster,” he said. “It’s widely used, it’s not pernicious and you’re just going to fill jails with non-violent offenders.”

Regardless of the Cambodian approach’s plusses, Collins expressed fear that any discussion of these discrepancies may cause a knee-jerk reaction by the government, as lax enforcement is largely borne out of tacit acceptance by police that they lack resources to enforce a pointless law and a willingness to accept certain activities by sellers.

“To highlight this will bring it lots of attention. It could get nasty,” he said.

Olivier Lermet, regional HIV/AIDS adviser at the UN Office on Drugs and Crime, suggested that countries in the region should focus on harder drugs that pose more of a threat.

“It is important to emphasise that amphetamine-type stimulants [notably methamphetamine] are by far the main concern in term of drug dependence in Southeast Asia,” he said in an email.

For Gloria Lai, International Drug Policy Consortium senior officer, the gulf between drug laws on the books and enforcement ought to be openly addressed, and perhaps written into law.

“A constructive way of seeking to address the inconsistency of the situation would be to have a rational dialogue and consultations with civil society about cannabis use – it would be great if this happened in Cambodia,” she said.

But despite the apparent societal acceptance, Cambodian authorities say cannabis should remain controlled.

Yim Sovann, a spokesman for the opposition Cambodia National Rescue Party, maintained that recreational use of the “addictive” drug should continue to be discouraged. However, he said he was open to people taking it medicinally.

“I think it needs to stay criminalised because it is an addictive drug,” he said. “But people should be able to use it for medicine … It all depends on the case.”

He added, however, that the government is not actively debating the prospect of medicinal marijuana.

Even if the government did make moves to legalise or decriminalise cannabis, it would only formalise the situation back in the Battambang village.

For Ratanak, marijuana use is still an accepted part of life in the community, with uses such as chicken soup seasoning, topical skin rash ointment, anti-nausea tonic, anti-headache tincture, cow medicine and recreational intoxicant. 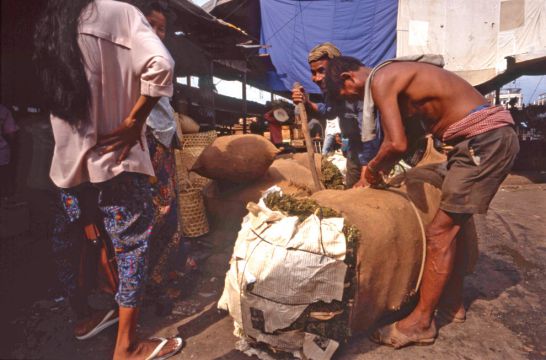 How Does Marijuana Affect Your Golf Game? An Investigation