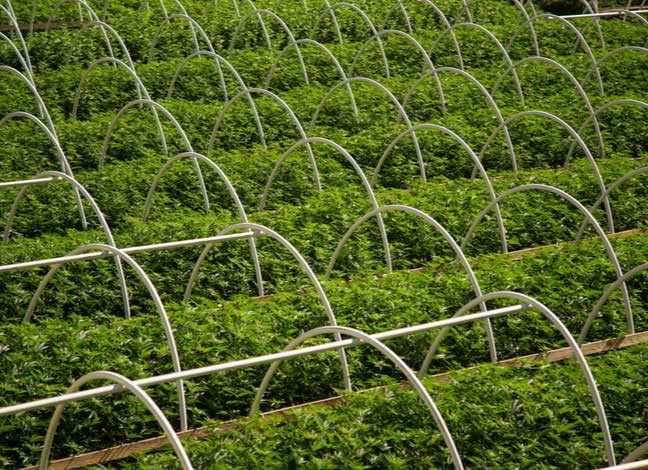 Israel, the so-called Start-up Nation, could soon become known as the Silicon Valley of medical marijuana if leaders in the industry have their way. Israel’s medical cannabis sector is flourishing, thanks in part to growing business ties with Canada, which will officially legalize marijuana in October. Hundreds of millions of dollars in deals between Canadian and Israeli companies have already been inked, with investments covering innovative products treating a wide range of health issues—from cancer, to epilepsy, to sleep disorders.

Saul Kaye is the man behind the CannaTech conference—one of the biggest international events in the industry—which takes place each year in Israel.

“We have about 106 clinical trials running right now in cannabis and nowhere else in the world has been able to do that,” Kaye, who also founded the Israel-based company iCan, revealed to The Media Line. “We’ve got nearly 40,000 patients now and when I started there were 12,000 patients so that’s a huge amount of growth, and obviously with growth comes capital. Capital all over the world is looking at the cannabis [industry].”

Kaye stresses that Israel is the perfect place to experiment with medical cannabis not only because the climate is ideal, but also because researchers are years ahead of their peers in many other countries.

For instance, CannRx Technology, a subsidiary of Izun Pharmaceuticals, has developed a revolutionary technology that can produce cannabis extractions to treat serious medical conditions.

“We created VCT or Vapor Capture Technology,” Dr. William Z. Levine, Founder & Executive Chairman at CannRx, explained to The Media Line. “Basically, [the machine] vaporizes cannabis. A gas plume comes out from the material similar to what you would inhale into your lungs. We then capture that gas plume, solubilize it down through a series of solubilization chambers and transform it into a very clean, efficient, very controlled liquid. It can be water soluble or oil-based, [depending on how] we choose to deliver it to the system.”

“It seems like almost every LP here has something to do with somebody in Canada right now,” Yona Levy, CEO of Alvit LCS Pharma, asserted to The Media Line. “Canada is probably the most mature market now in terms of cannabis in the world. They’ve taken it very seriously and they’ve approached it the right way.”

Nevertheless, the prospects for medical cannabis in Israel are not as rosy—or “green”—as they could be. The industry is plagued by uncertainty, particularly due to stringent government regulations that currently forbid the export of marijuana products.

For several years and following countless Israeli parliament debates, the sale overseas of Israeli medical cannabis remains banned. The most recent committee meeting, held just last month, was marred by political infighting between officials at the Ministry of Finance and the Ministry of Public Security, with the head of the latter, Gilad Erdan, objecting to export reform for a variety of reasons.

Cannabis industry insiders argue that while numerous foreign investors have expressed an interest in Israeli products, agreements in the works with Canada and other countries—reaching into the billions of dollars—could ultimately fall through if the government does not solve the issue quickly.

“It all got held up by Israeli Prime Minister Benjamin Netanyahu, who said ‘I want to do a final review before we allow exports,’” Kaye, who created CannaTech, asserted. “A third of my investors are Canadians, a third are Australians and a third are Americans so we need to be able to export to other countries.”

For its part, the Canadian government is ready and willing to collaborate with Israeli companies in the near future.

“Canadian and Israeli companies are exploring opportunities for trade and investment in the cannabis-for-medical-purposes industry, in addition to partnerships in research and development,” a spokesperson at the Canadian Embassy in Tel Aviv wrote in a statement provided to The Media Line. “Canada does not support any international trade in cannabis for non-medical or non-research purposes.”

Despite the legislative and bureaucratic hurdles that remain, some in the industry have found creative ways to keep their businesses alive.

“We’re concerned about the regulations,” Alvit Pharma’s Levy conceded, adding, “and that’s why with regards to research and development it’s very simple. Israel doesn’t give us permission? Well, I’ll take my recipe and I’ll [create my product] somewhere else.”

To circumvent legislative hurdles and the export ban, some Israeli businesses have relocated their research and development facilities to other nations, whereas other entrepreneurs have started growing marijuana outside of Israel.

One such company is Together Pharma, which recently reached an agreement with an unnamed Canadian firm to sell five tons of cannabis oil worth hundreds of millions of dollars.

“Due to the Israeli export regulations, we are opening a greenhouse in Uganda, where regulations to export cannabis are already in place,” Arik Filstein, Founder of Together Pharma, related to The Media Line. “At the moment, Israel is losing money. Instead of taxable revenue being generated here, it’s going to other countries, which is unfortunate.” bowel diseases in humans,” Prof. Mrsny concludes.