One of the countries with the world’s harshest drug laws is planning to invest in medicinal pot.

Singapore’s National Research Foundation (NRF) this month (Jan. 10) announced that it would develop synthetic cannabinoids, or chemical compounds found in the marijuana plant, as part of a broader S$25 million ($19 million) investment by the body into synthetic biology. The initiative will help boost Singapore’s push to develop a “bio-based economy,” and grow new industries and create jobs in a sustainable way.

The NRF, which is affiliated with the National University of Singapore, said it plans to produce strains of medicinal cannabinoids derived from the cannabis plant for therapeutic purposes relating to diseases such as Alzheimer’s and Parkinson’s. Cannabinoids include tetrahydrocannabinol (THC, the psychoactive element of weed) and cannabidiol (CBD, which is used for pain relief and produces no high).

Any consumption, production, and trafficking of drugs is illegal in Singapore, and drug trafficking can carry the death penalty if the amount exceeds a certain threshold. Poppy seeds are also classified as a prohibited substance.

In the US, where cannabis remains illegal on the federal level, the Patent and Trademark Office has also granted intellectual property rights to companies developing both marijuana plant strains and synthetic weed for industry.

Marijuana Prosecutions In Texas Have Dropped By More Than Half Since... 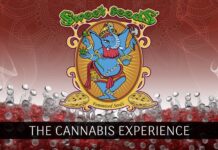 Carlos Santana Is Starting His Own Weed Strain