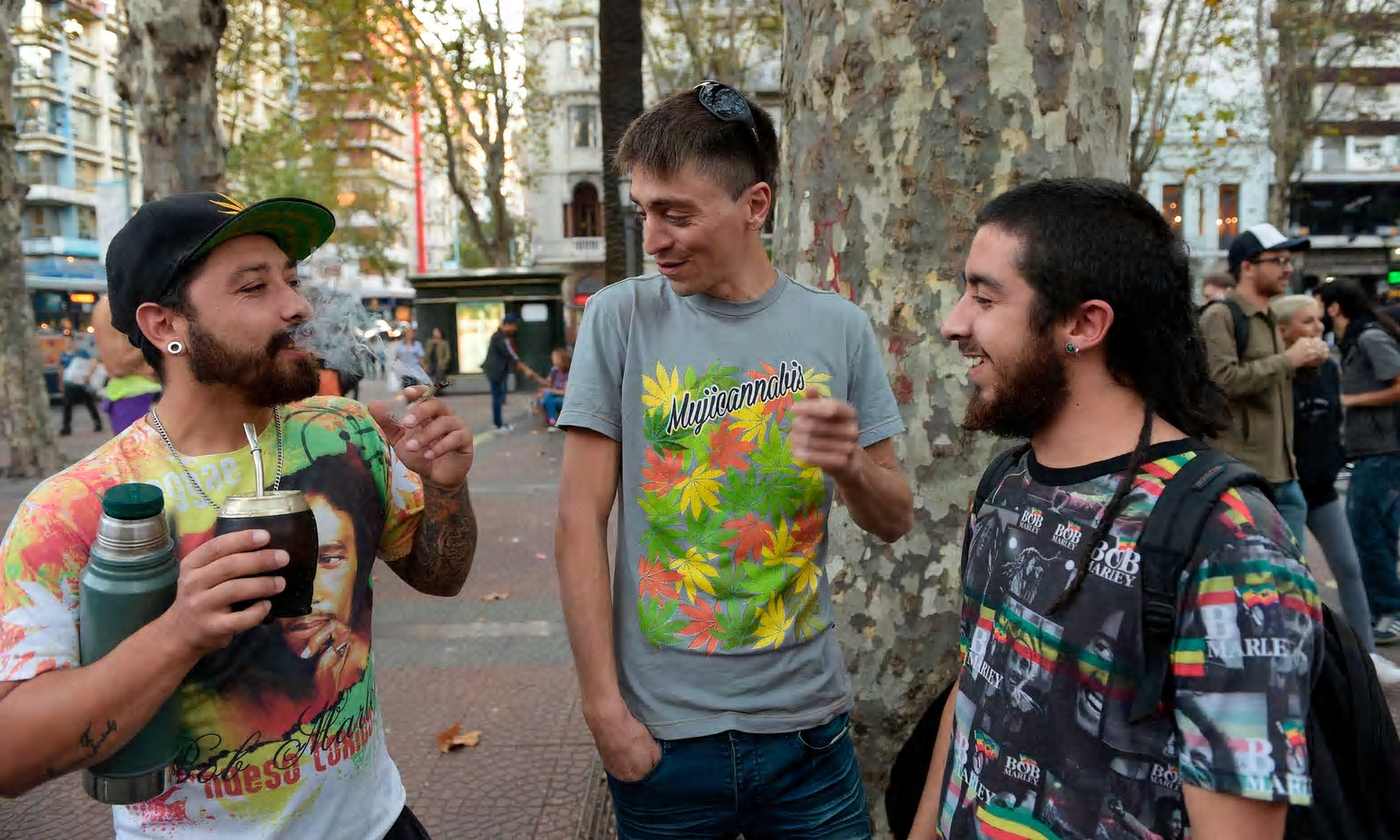 Alicia Castilla was watering the plants in her garden on a quiet Sunday afternoon when five police patrol cars screeched to a halt outside her home. A team of 14 officers “armed to the teeth” stormed through her gate and arrested the mild-mannered, 66-year-old intellectual. They seized everything they could find: computers, her mobile phone, books, even an orange squeezer.

They also impounded the 29 cannabis plants she was watering and 24g of marijuana they found in her possession. She was taken to a police station where she spent the night handcuffed to a bench. “They treated me like the female version of Pablo Escobar,” Castilla told the Observer. But far from resembling the infamous Colombian drug lord who inspired the 2015 Netflix series Narcos, Castilla was a peace-loving, grey-haired author whose book Cultura Cannabis had become an unexpected bestseller. Like many Argentinian sexagenarians, she had recently retired to nearby Uruguay. The seized plants were for her personal use. “I make a living writing about marijuana, not selling it.”

Castilla’s arrest in 2011 sent Uruguay into shock. Although the consumption of recreational drugs had never been outlawed in a country that prides itself on its broad-mindedness and liberal institutions, its cultivation and sale remained forbidden. The author faced between two and 10 years behind bars.

Her imprisonment at the women’s prison in the town of Canelones became round-the-clock news. “I fell into a foul-smelling pit that reminded me of Midnight Express. Cockroaches crawled over the bed, there were rats the size of rabbits in the bathrooms.”

Castilla realised she had become a national celebrity when her fellow inmates broke into spontaneous applause on her arrival. The eldest of the 120 women imprisoned there, her fellow inmates nicknamed her “the reefer grandmother”, a moniker that was quickly picked up by the press.

Thousands marched to demand her release. The protests soon galvanised a longstanding demand for the full legalisation of recreational cannabis. “The media coverage was crazy. Legislators started bringing legal marijuana draft bills for me to look at in prison,” Castilla, now 72, recalls.

Her three-month incarceration (and the lengthy series of trials until the case was dismissed by Uruguay’s supreme court last year) finally paid off. The cultivation of cannabis was legalised in 2014, and in July Uruguay will become the first country in the world where its sale is legal across the entire territory.

“It’s important for Uruguay to advance towards a logical regulation of recreational marijuana,” says Eduardo Blasina, director of the recently inaugurated Cannabis Museum located in a large terracotta-coloured property in the old Palermo neighbourhood of Uruguay’s capital city, Montevideo.

“The law gives consumers access to certified, unadulterated marijuana,” says Blasina. “South America’s war against drugs has been absurd, with catastrophic results no matter which indicators you consider, including consumption. If Uruguay’s experience turns out positive, it will be easier for other countries such as Colombia or Mexico, mired in huge problems with powerful narcos, to find a better solution than the disastrous one implemented so far.”

For Laura Marcos, one of the most energetic campaigners for legalisation, Uruguay’s unique history of never having prohibited the consumption of any drug was key. “We found this grey area in the law where consumption was legal but cultivation was not, so every time a marijuana-grower was taken prisoner it was reinforcing the message that the only place to obtain access to a legal substance was on the illegal market.”

But not everyone is pleased with how legal marijuana is being implemented in Uruguay. “I’m happy because now you can plant without going to prison,” says Juan Manuel Varela, the 28-year-old manager of MDAR (Spanish-language acronym for high-quality marijuana), one of the cannabis clubs that have been set up under the new legislation. “But like many things in Uruguay, the new law is a good idea that is being applied badly.”

Cannabis activists such as Varela and Castilla are upset that the new law falls short of full legalisation. Home growers are required to register with the government for a permit that grants them a maximum of six plants, and cannabis clubs such as Varela’s require permits for a maximum of 45 members who are allowed to withdraw only 40g per month from the club’s crop.

Most controversial of all, when the law goes into full effect in July, legal marijuana will only be available at pharmacies. Though the price will be highly accessible, only $1.30 per gramme compared with $3 on the street, consumers must register with the government first. They will then be required to identify themselves with a digital thumb scan to withdraw their weekly maximum of 10g.

The government has taken important precautions to prevent the registry falling into the wrong hands because of the privacy issues involved. Pharmacists will not be given the name of the client associated with each thumb scan. Only the amount of grammes still available from each client’s quota will be revealed on the pharmacy’s screen. Additionally, only seven members of the government will have access to the full registry, and three of them will need to be present simultaneously in order to retrieve any names from it.

“It’s like a police file they’re building of planters and consumers,” says Daniel Vidart, another long-time cannabis activist and author who met, fell in love with and married Castilla shortly after her release from prison six years ago.

The impressively spritely 96-year-old is a personal friend of Uruguay’s former president, José “Pepe” Mujica, who introduced a series of liberal reforms during his 2010-2015 term in office, including same-sex marriage, abortion and the sale of state-controlled marijuana.

Vidart is highly critical of his friend’s marijuana law. “This law actually stigmatises marijuana more than it legalises it,” says Vidart, holding his wife Castilla’s hand. “Why should there be a registry of marijuana consumers and not one of alcohol consumers? Alcohol is a much deadlier drug. This law continues considering that marijuana smokers are so dangerous that they need to be counted by the government. And a registry is more or less safe as long as you have a democratic government, but it could become a weapon against consumers should the political mood change.”

The registry was opened at the beginning of May. So far about 3,500 people (out of Uruguay’s population of 3.4 million) have signed up to buy marijuana at pharmacies. Additionally, since 2014 about 6,700 have signed up as home growers and 57 cannabis clubs have been set up, according to the government’s Cannabis Regulation and Control Institute.

Despite the media attention, sales seem to be likely to get off to a slow start. “Only 30 of the country’s 1,000 pharmacies have signed up to sell marijuana so far,” says Alejandro Antalich, vice-president of the Uruguayan pharmacies association.

“Our society can be conservative, resistant to change, so there is still uncertainty and many pharmacists are waiting to see how the system works before signing up to sell. There is also fear of reprisals against pharmacies from corner drug traffickers upset at losing their clients.”

Castilla also has mixed feelings about the new law. “I would like to see full freedom to plant in your own home,” she says.

Has she registered to plant or buy. “No, I haven’t.” Is she still growing at home? “Yes, I am.” Isn’t she afraid of falling foul of the new law? “I don’t think they’d dare come after me again,” says Castilla with a twinkle in her eye. 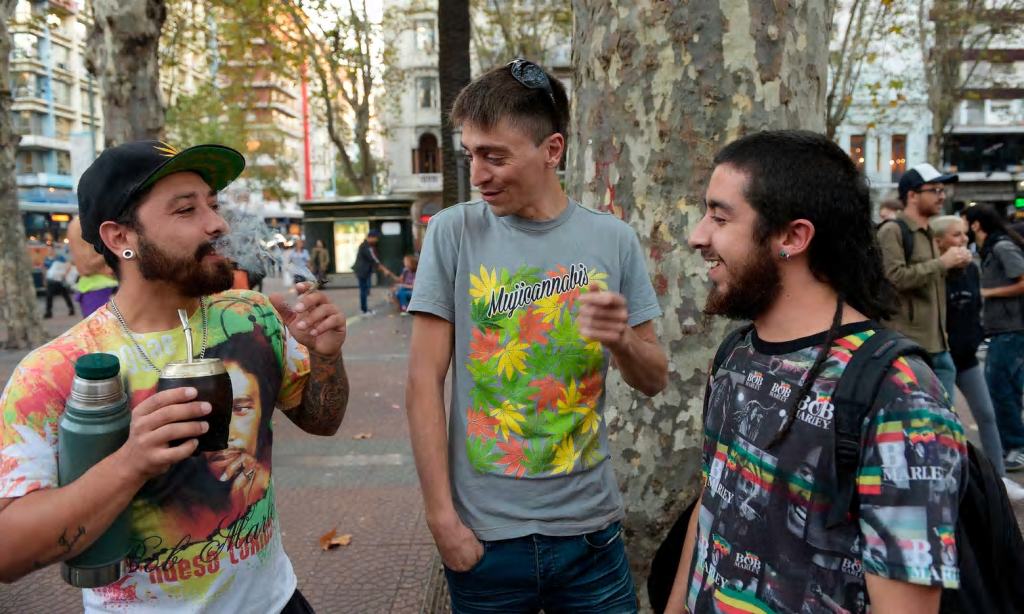 News Moderator: Ron Strider 420 MAGAZINE ®
Full Article: Uruguay, the first country where you can smoke marijuana wherever you like | Society | The Guardian
Contact: Contact the Guardian US | Info | The Guardian
Photo Credit: Miguel Rojo
Website: News, sport and opinion from the Guardian’s US edition | The Guardian

CO: Bags Of Cash And Stealthy Deliveries – How Pot Start-Ups...

Canada: Stick With Your Dealer? Or Buy Pot Legally? How Legalization...