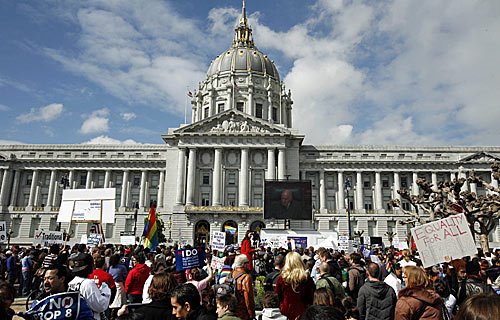 The country’s leading medical marijuana advocacy group, Americans for Safe Access (ASA), will host a 4-day National Medical Cannabis Unity Conference, “Bridging the Gap Between Public & Policy,” this week in Washington, D.C. from February 22-25, 2013. The conference will feature medical and legal experts, elected officials, as well as seasoned advocates from the U.S. and overseas, including Canada, Israel and the Netherlands.

The conference will also feature a wide array of workshops and panels focusing on scientific research, strategic planning, and skills building, all aimed at providing advocates the tools they need to achieve policy change on medical marijuana. On Monday at 9:30am, a press conference will be held at the Capitol Building, featuring Members of Congress and other elected officials, in advance of a lobby day where advocates from at least thirty-two states will be meeting face-to-face with their Members of Congress on medical marijuana issues.

Renowned physicist and father of ‘Superstring Theory,’ Dr. John Schwarz, will headline the national medical marijuana conference, speaking publicly for the first time on this issue. “Being a physicist, not a physician, I don’t usually comment on issues in medical science,” Dr. Schwarz wrote in a Huffington Post editorial from late last year. “But I can no longer remain silent while people in my family and profession run the risk of federal arrest so that they can follow the recommendations of their doctors.” Dr. Schwarz will join Dr. Sunil Aggarwal on Friday at 8:30am for a press briefing to discuss their effort to petition the Obama Administration with open letters from scientists and medical professionals.

“We’re at a pivotal moment in the history of medical marijuana,” said ASA Executive Director Steph Sherer. “It is now more important than ever for us to come together to better educate ourselves and strategize on changing public policy in order to meet the real needs of medical marijuana patients across the country,” continued Sherer. “However, this conference is not just for patients and their advocates, it’s also for lawyers, doctors, policymakers, and key stakeholders in the effort to establish medical marijuana as one of the public health issues of our time.”

The opening day of the conference, Friday, February 22nd, will be dedicated solely to scientific research on the medical efficacy of marijuana. Co-sponsored by Patients Out of Time, the International Association for Cannabinoid Medicines, and the American Alliance of Medical Cannabis, the day will feature medical marijuana researchers from around the world, presenting on the most recent advancements in the field. At 2pm on Friday, the Canadian Consortium for the Investigation of Cannabinoids and the University of California-San Francisco, in collaboration with the Society of Cannabis Clinicians will host “Cannabis in Medicine: A Primer for Health Care Professionals,” a Continuing Medical Education (CME). The accredited CME course is an overview of the clinical use of cannabis, providing health care professionals with up-to-date clinical information on the therapeutic benefits of cannabis and the endocannabinoid system.

On Saturday and Sunday, ASA will be holding panels and workshops on movement building and development, under the banner “Harnessing our Power for Victory,” bringing together patients, doctors, labor, industry, drug policy reformers, environmentalists, and veterans. During the two days of strategic planning and skill building, participants will hear from various experts on international and U.S. policy, as well as from medical marijuana stakeholders. In addition to discussing the movement’s history and what to consider when moving forward, panelists and workshop facilitators will lead sessions in citizen lobbying, speaking to the media, grassroots fundraising, and much more. ASA will host a dinner and awards ceremony on Saturday evening from 7-10pm.

What Happens When You Ask The Counterculture And ‘Me’ Generations About...