As a prominent Chicago surgeon, Dr. Charles Bush-Joseph sees them all too frequently: people who endure severe injuries or multiple surgeries, only to become addicted to prescription painkillers.

One patient who pleaded for help was on such strong drugs already that Bush-Joseph knew he couldn’t handle more surgery without dangerously high levels of opioids.

But nine months later, the patient returned and told the doctor he’d replaced those powerful pain pills with another drug — marijuana. And after seeing the deadly damage opioids can do, Bush-Joseph said such cases have shown him that cannabis can be a safer alternative.

“There’s a large group of patients who have chronic pain who rely on opioids,” Bush-Joseph said. “Those are the patients who would benefit from medical cannabis.”

Illinois’ medical community has been somewhat reluctant to publicly embrace medical marijuana in the two years since the state’s first dispensaries opened.

But some physicians say the matter has taken on added urgency as the nation sinks deeper into an opioid crisis involving both prescription drugs, and heroin and its synthetic analogs. The U.S. Centers for Disease Control and Prevention reports there are 40 prescription opioid deaths a day, Illinois health officials have warned it’s the most dangerous public health issue facing the state and President Donald Trump has declared opioid addiction a public health emergency.

Though Bush-Joseph speaks for himself — not for Rush University Medical Center where he is a professor, and not for the Chicago White Sox or Bulls, with whom he has worked — his word as a leading arthroscopic surgeon carries some weight. After severe injury or surgery, he concedes patients typically need opioids like Percocet and Vicodin for a month or two. But after that, he believes patients should have potential access to marijuana as another longer-term alternative.

American Association of Orthopaedic Surgeons records reveal that Bush-Joseph has stock options in Cresco Labs in Chicago, one of the leading producers of medical marijuana in Illinois. He said he is on Cresco’s medical advisory board, but by law cannot certify his own patients for medical marijuana, and describes himself as a “believer” that it can help people.

To advocate for that cause, Bush-Joseph and two other physicians — Dr. Leslie Mendoza Temple, former head of the state Medical Cannabis Advisory Board, and Dr. Laurence Levine, a Rush urologist — have formed Physicians Against Injurious Narcotics, or PAIN. More doctors initially planned to participate, but Bush-Joseph said they got scared off by concerns about their reputation, or opposition by their hospitals or medical groups.

The doctors support a new bill before the Illinois General Assembly that would expand the state medical marijuana program to allow cannabis to be used by any patient who qualifies for use of opioids. Such a change could vastly expand the program, which now has only about 27,000 participants. Currently there are about 40 specific conditions, including cancer and AIDS, that qualify sufferers to apply to use medical marijuana.

If passed into law, the new bill would allow those who qualify to receive a one-year marijuana card, without the fingerprinting and criminal background check now required. Approval would be expedited to 14 days, rather than the two to three months it can now take.

The sponsor, Sen. Don Harmon, a Democrat from Oak Park, said the opioid epidemic shows that what’s being done so far isn’t working, and that research shows marijuana can help treat pain.

“We should be actively helping people who are addicted to opioids,” Harmon said, “instead of treating them like criminals.”

Advocates for such a program point to a 2014 study that found opioid overdose deaths decreased by one-third in states that legalized medical marijuana. Unlike deaths from prescription opioids, which the CDC reports has quadrupled since 1999, advocates say it’s virtually impossible to die from marijuana overdose alone.

While a few doctors are coming out in favor of medical marijuana, there remain a large number who do not consider it medicine, because it hasn’t gone through the clinical trials required for approval by the U.S. Food and Drug Administration, as have prescription drugs.

One synthetic form of THC, the ingredient in marijuana that gets users high, has been approved by the FDA to fight nausea, but studies have found that users don’t like it as much and say it’s not as effective.

Whatever form of marijuana patients might use, critics say they’re trading one dangerous drug for another.

Aaron Weiner, director of addiction services for Linden Oaks Behavioral Health, based in the western suburbs, said the “deeply flawed” medical marijuana program lets users take whatever amount and concentration of cannabis they wish, with comically named strains like Bruce Banner that seem aimed more at kids than middle-aged patients.

He cited a recent study in the American Journal of Psychiatry that found that long-term marijuana use increased the chance of developing an opioid use disorder. Instead, Linden Oaks uses tools like other medication-assisted therapy, cognitive behavioral therapy, physical therapy and even combinations of Tylenol and Advil, which he said have shown effectiveness in helping people taper off opioids.

“Like opioids, marijuana is a dead-end for pain — you’ll develop a tolerance, need to go up in the amount you smoke and will have to smoke and be high all the time to achieve pain relief,” Weiner said in an email. “In my opinion, we need actual sustainable solutions to chronic pain, not just other addictive substances.”

Lawmakers could take up the proposal to expand the medical marijuana program early next year. They are also expected to consider a separate proposal to legalize the recreational use of cannabis, despite a continuing federal ban. Bush-Joseph said he does not support the legalization of recreational marijuana in Illinois. 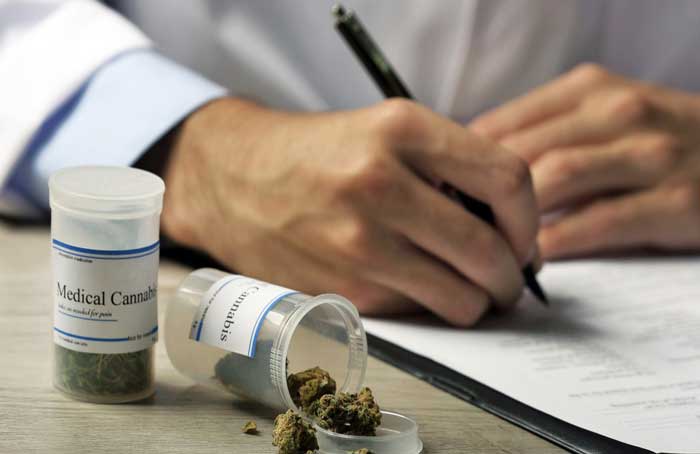 Canada: ‘There Is A Difference’ Between Medical And Recreational Marijuana, Patients...