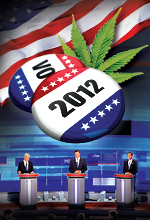 Libertarian presidential candidate and former New Mexico Governor Gary Johnson today praised Rep. Paul Ryan for his willingness to let states decide whether to allow the use of medical marijuana, but added, “Don’t get too excited until we know where Mitt Romney stands.” Responding to a question on a Denver radio show over the weekend, Ryan stated that, while he is personally opposed to medical marijuana, he agrees with allowing states to decide whether to allow it or not. Medical marijuana is legal in Colorado under state law, but the Obama Administration has aggressively sought to close dispensaries in the state.

Johnson has stated that, if elected, he would immediately cease federal enforcement efforts aimed at preventing states from allowing the prescription and use of medical marijuana, and reclassify cannabis to allow its use under the Controlled Substances Act.

Responding to Ryan’s statement, Johnson made the following statement:

“While I applaud Paul Ryan’s words, this is not the first time we have heard a candidate for national office express a willingness to tolerate state medical marijuana laws, so ‘buyer beware’. Barack Obama categorically pledged to not use federal resources to go after medical marijuana dispensaries operating legally under state law, and his Justice Department even issued a memo to that effect. But what’s happened? The Obama Administration has proven to be an even greater enemy to medical marijuana than President George W. Bush.

“We’ve heard Barack Obama’s words, and seen his actions. Now we’ve heard Paul Ryan’s words. And all we really know about Mitt Romney on this issue is that he doesn’t want to talk about it, having rebuffed questions from the media and a medical marijuana patient.

“Medical marijuana may not be an important issue for Gov. Romney, or for any of the other candidates, but it is vitally important to the many Americans who are suffering and who could be helped if the Feds would just get out of the way. Polls show 70 percent of Americans believe states should be free to permit medical marijuana. We need to know where Mitt Romney stands.”