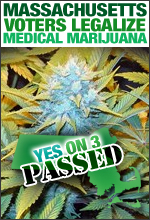 Massachusetts voters chose to legalize the medical use of marijuana on Tuesday. A large turnout of voters went to the polls today, Nov. 6 to cast votes for the President of the United States and one key senate race between Republican incumbent Scott Brown and Democratic challenger Elizabeth Warren. But voters here were faced with three ballot questions, and one was the legalization of marijuana for use in medical situations. With the polls closed nearly an hour ago, 63 percent or 729,866 votes say the marijuana should be legal in Massachusetts. Just 37 percent, or 432,252 voters, say nay. Thirty six percent of precincts have reported at this time, but this matter is sealed. It’s a yes.

On the state map of cities and towns, it’s green all over except for the town of Mendon in the center-south, with medical marijuana winning in the vast majority of precincts.

The proposed law would eliminate state criminal and civil penalties for the medical use of marijuana by qualifying patients. To qualify, a patient must have been diagnosed with a debilitating medical condition, such as cancer, glaucoma, HIV-positive status or AIDS, hepatitis C, Crohn’s disease, Parkinson’s disease, ALS, or multiple sclerosis.

The patient would also have to obtain a written certification, from a physician with whom the patient has a bona fide physician-patient relationship, that the patient has a specific debilitating medical condition and would likely obtain a net benefit from medical use of marijuana.

The proposed law would allow patients to possess up to a 60-day supply of marijuana for their personal medical use. The state Department of Public Health (DPH) would decide what amount would be a 60-day supply. A patient could designate a personal caregiver, at least 21 years old, who could assist with the patient’s medical use of marijuana but would be prohibited from consuming that marijuana. Patients and caregivers would have to register with DPH by submitting the physician’s certification.

Marijuana is on the ballot in a number of U.S. states this election.

In fact, voters in the states of Washington, Colorado, and Oregon are also casting their ballots on the question of marijuana legalization, including for recreational use.

The symbolic importance of a win for state-level legalization would extend well beyond U.S. borders. The U.S. government is well-known in Latin America for its role as chief architect and champion of the “war on drugs,” including the marijuana prohibition regime embedded in the United Nations drug conventions. Even if federal law remains unyielding, the state-level move toward legalization in the home of the modern drug war could hardly go unnoticed in Latin America.

Canada: Website Launched To Teach Youth About Risks Of Cannabis