If you are one of the millions who have been suffering from glaucoma, then smoking marijuana can help you get the best eyesight and relieve pressure from they eyes. Intraocular pressure can increase in certain individuals, especially those who have diabetes. Glaucoma is serious disease that can cause blindness.

People who suffer from epileptic disorders or seizures can get tremendous relief and relaxation from smoking marijuana.

Marijuana ingestion can benefit your health when used to lessen the pain of MS, Rheumatoid arthritis and migraines. Also those sufferers of HIV, amputation, alcoholism and spinal surgery who are experiencing nerve pain seem to have a lessening of their pain when they are on a medical marijuana treatment protocol.

Marijuana, in the 2010 Canadian study, was found in these patients to be many more times more effective then aspirin in limiting their perception of pain. Medicinal marijuana is administered in more controlled dosages, and strengths that is found on the street. It is a stated goal of physicians to “do no harm.” The lessening of a patient’s pain, represents the epitome of this goal.

7. Prevents the Spread of Cancer

There is a chemical found in marijuana that has been shown to inhibit the growth of cancer cells. Researchers believe the process is that cannabidiol turns off the Id-1 gene. Cancer cells duplicate this gene in higher numbers than non-cancerous cells.

Researchers also studied breast cancer cells in the lab that contained Id-1 in high quantities. They were treated with cannibidiol. The result of this treatment was a lower incidence of Id-1 and the remaining genes were found to be less invasive.

There have been studies done in the US, Spain and Israel that posit that chemicals in marijuana can actually mean the death of cancer cells.

6. THC Reduces the Growth of Alzheimer’s

THC can help to slow down the progression of Alzheimer’s disease. A study from 2006 found that chemicals in this drug can help keep amyloid plaques from forming. This will help keep you from getting this disease, and legalizing this drug could have everything to do with finding a cure.

5. Reduces the Spread of HIV

Cannabis is highly regarded in the medical community for it’s effectiveness in treating patients with HIV. People who have contracted the disease suffer from weight loss and body aches amongst other many things however, a new research that suggest cannabis might be able to halt the spread of the disease altogether has come to light. Additionally, a study was conducted in Louisiana; in this research scientists gave a daily dose of THC to primates who had contracted an animal form of the HIV. Over the course of the study, scientists found that the damage to immune system in the primates’ stomach had decreased.

Marijuana will help with rheumatoid arthritis pain, swelling and allow them to have restful sleep .According to a 2011 study, where a cannabis based pain killer was given to rheumatoid arthritic patients, there was a marked decrease in observable pain, compared to the administration of a placebo.

Rheumatoid arthritis can be an extremely debilitating disease, striking the joints of the affected patients. The subsequent swelling causes a reduction in the range of motion. But this kind of arthritis is different than osteoarthritis, the kind one gets with old age. RA is an autoimmune disease, meaning in effect your body is attacking healthy cells. Any age group can get it, and any gender, but women are stricken the most.

Another use for medicinal marijuana is stimulating appetite. Recent studies by the National Cancer Institute indicate that the inhalation of cannabis can lead to an increased consumption of calories. Conversely, studies published in the American Journal of Medicine suggested that pot smokers are skinnier than the average person. They studied their levels of the hormone insulin and their blood sugar levels, and even though marijuana users consume more calories, they tend to have a healthier metabolism and a better reaction to sugars. The study analyzed data from more than 4,500 adult Americans – 579 of whom were current marijuana smokers, meaning they had smoked in the last month. About 2,000 had used marijuana in the past, while another 2,000 had never used the drug.

Research has shown for patients suffering from the debilitating disease Parkinson, smoking pot can help reduce pain and tremors. It has been show to increase sleep quality as well as improving fine motor skills. Much of this research has been conducted in Israel.

Being able to release muscle tension, is another benefit of medical marijuana. A study done by the American Cancer Society shows that patients suffering from multiple sclerosis (MS), who used a liquid form of cannabis, encountered a reduced in muscle spasms as well shaking.

Another study done on eight MS patients, in advanced stages, showed a reduction in tremors and muscle stiffness.

Marijuana is a safer and less harmful alternative to traditional PTSD treatment. The relaxing effect marijuana has on the user without the fuzzy mental state caused by antidepressants can allow soldiers to relieve their anxiety without having to feel medicated. Antidepressants and other drugs prescribed for PTSD possess a high risk for addiction and are not recommended for use over long periods of time. Marijuana use can fluctuate, wane, or increase depending on the state of the patient with little no side effects based upon the amount of usage. There are no conclusive studies that indicate marijuana is addicting in the traditional sense of drug addiction such as substances with opiates. Marijuana may be the safest anti depressant on the market. 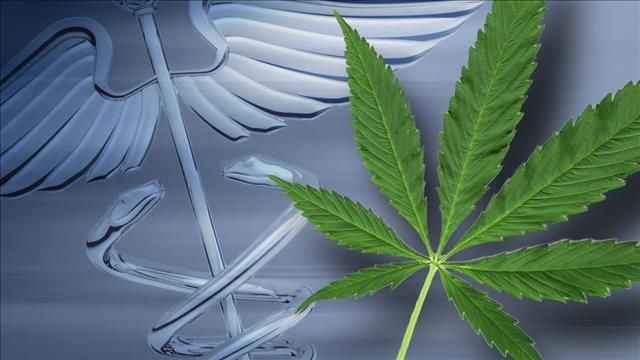