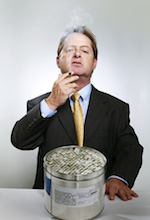 During the last 32 years, stockbroker Irvin Rosenfeld has smoked 130,000 marijuana cigarettes – with the federal government’s blessing. As jaws dropped in a Harrisburg legislative chamber filled with state senators, Rosenfeld made the remark Tuesday and then held up a silver canister containing 300 pre-rolled joints, a month’s supply. He continues to receive the canisters from a government-authorized farm in Mississippi to help treat a rare bone-tumor disorder. This despite the drug’s classification by the Drug Enforcement Administration as a top-tier hazardous substance with no medicinal value.

“I’m living proof of the hypocrisy of the federal government,” Rosenfeld, who lives in Fort Lauderdale, Fla., told the Law and Justice Committee, which is considering a bill to legalize medical marijuana. If the bill is fast-tracked – some senators said they want it released to the floor by the end of the month – Pennsylvania would vie with several other states to become the 23d to allow cannabis to be sold for medical purposes. New Jersey has had a stumbling marijuana program since 2010, and Delaware is in the process of implementing one. Florida is among several states where voters will decide the issue in ballot initiatives this year.

Rosenfeld is also actively lobbying for the medical marijuana referendum in his state. Polls show 66 percent of the state’s voters favor it, but he worries that a reelection victory by Republican Gov. Rick Scott could undo the effort. “Scott will do the same thing as [Gov.] Christie did in New Jersey,” he said in an interview, adding that overly strict regulations have excluded many sick people from getting access to cannabis. “We’ll end up with only four dispensaries around the state and only three strains that are allowed.”

When Christie inherited the program from outgoing Gov. Jon S. Corzine – who signed the marijuana bill on his last day in office – he said he never would have approved it. His administration imposed tight controls, and he has said he wants to prevent those who are not truly sick from obtaining the drug. Rosenfeld is one of two federal medical marijuana patients nationwide. Republican Sen. Mike Folmer, a sponsor of the bill in Harrisburg, had invited him to testify. Folmer said he wanted the committee to be educated about medical marijuana.

After Rosenfeld spoke, Folmer asked, incredulously, how the federal government could simultaneously classify marijuana as a “schedule I drug [with] no medicinal use” that’s not even worth testing, and still supply it to him for medical reasons. Rosenfeld was approved for the Compassionate Investigative New Drug program in 1982 and then was grandfathered into receiving a continuing supply when the program was shut down a decade later during the government’s war on drugs.

Rosenfeld said he has never gotten high from the 10 joints he smokes daily and believes his body consumes it as a muscle relaxant, pain reliever, and anti-inflammatory agent. Diagnosed when he was 10 with multiple hereditary exostoses, a genetic condition in which painful bone tumors multiply throughout the body, Rosenfeld said his first doctors had warned he might not live past his teenage years. “This is not the harmful drug the government makes it out to be and the government has been lying to us, all these decades,” Rosenfeld said in an interview.

He underwent several surgeries to remove the tumors and was prescribed a morphine derivative and various other addicting narcotics. While experimenting with cannabis during his college years, he discovered he was able to sit for longer periods without pain and his tumors were decreasing in number. “It’s amazing how well it works,” Rosenfeld said. He said that he has undergone various tests and his lungs and brain have not shown any signs of being compromised by the drug.

The program started in 1976 when Robert Randall, a glaucoma patient, sued the government, saying cannabis was preventing him from losing his sight. A federal judge agreed. Rosenfeld became the second patient after spending a decade appealing to the federal Food and Drug Administration to be part of a cannabis research program. In 1992, then President George H.W. Bush shut it down and allowed only the 13 patients involved to continue to participate, Rosenfeld said. Musikka Elvy, who lives in Oregon, is the only other federal cannabis patient currently in the program. She uses it to treat glaucoma. Rosenfeld said that the marijuana that he and Elvy receive is grown at a government farm at the University of Mississippi. 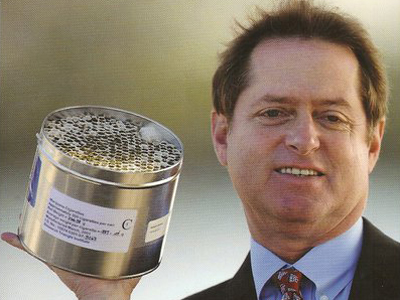