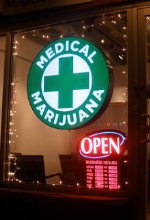 Previously, possession of up to 2 ounces of marijuana was punishable by a six- to 24-month jail term. Vermont legalized the use of medical marijuana in 2004.