In Oklahoma, two competing efforts to legalize cannabis for adult use are expected to go on the ballot in November. Question 820 would legalize by statute, while Question 819 would do so through a constitutional amendment. In 2018, medical marijuana passed the ballot with 56 percent support, which suggests that full legalization has a real shot.

But Oklahoma’s voters are probably less of an obstacle than the legislature and Governor Kevin Stitt (R). In February 2022, Stitt said that the medical marijuana ballot question had been “misleading” to voters, and claimed that it fostered crime. “You know, as well as I do that, not all of that product is being sold legally,” he said. “Let me be clear: Drug cartels, organized crime, foreign bad actors have no place in the state of Oklahoma.” Then in May, he signed a law placing a two-year moratorium on any new medical marijuana licenses. If voters pass adult-use legalization, it will no doubt be in for a rough ride.

On July 6, Oklahomans for Sensible Marijuana Laws submitted over 164,000 voter signatures to state officials to place Question 820 on the ballot. This measure would legalize for adults over 21, allowing them to buy and possess up to 1 ounce of cannabis. They could also grow up to six adult cannabis plants at home. The state would charge a 15 percent excise tax on cannabis sales, and have its medical marijuana regulators oversee the new industry.

Two provisions in Question 820 are notable. For the first two years, only existing medical marijuana businesses would be licensed as recreational businesses. Oklahoma wouldn’t be the first state to give medical marijuana companies a significant, and controversial, advantage in a new adult-use market—just look at Connecticut or New Jersey.

This provision shows that its writers are paying attention to legalization around the country.

The other provision is rarer among cannabis-legal states. Question 820 would prevent cities and towns from banning cannabis businesses; they could only regulate where and when businesses can operate. This provision shows that its writers are paying attention to legalization around the country. Most cities and towns banned dispensaries in New Jersey, and likewise in New York. Question 820 will prevent this. If legal dispensaries were only available in Oklahoma’s largest urban areas, like Oklahoma City and Tulsa, while everyone else had to drive hours to reach one, that would severely restrict access.

Question 819, meanwhile, has been filed by a different group, Oklahomans for Responsible Cannabis Action. The biggest practical difference is that it would legalize a much larger quantity of cannabis—up to 8 ounces for adults, and up to 12 plants grown at home. To make the November ballot, it needs 178,000 valid signatures, which must be submitted by August 22.

It faces a higher hurdle in this sense, because Question 819 is a constitutional amendment. The motive for this is that it should be harder for lawmakers or the governor to reverse. Any future changes to cannabis law would have to be approved by voters. It’s a direct response to Gov. Stitt’s stance on medical marijuana, which was approved as a statute. (The director of the Question 819 campaign, Jed Green, also worked on the medical marijuana campaign.)

Currently, people who use marijuana are a primary target of Oklahoma’s drug war. According to state data, 45 percent of nearly 12,400 drug arrests statewide in 2020 were for cannabis. Four in 10 of all illicit drug arrests were just for marijuana possession.

Drug arrests overall are going down in Oklahoma. Legalizing cannabis would accelerate this trend.

The racist impact on Oklahomans is equally predictable. In a national study, the ACLU found Black residents were over four times likelier than whites to be arrested for marijuana possession. This disparity worsened between 2010-2018, even as marijuana possession arrests decreased overall.

But drug arrests overall are going down in Oklahoma. They peaked at over 22,400 in 2016 and have dropped every year since. Legalizing cannabis and removing criminal penalties would accelerate this trend.

And to that point—for a past marijuana conviction that would no longer be criminalized, both Questions 819 and 820 would establish people’s right to petition a court for resentencing or record expungement.

But unlike many other legal cannabis states—including California, New Jersey and New York—the expungement process would not be automatic. If you were convicted on a marijuana charge, it would up to you to figure out if you’re eligible, and where and how to petition for relief. That’s a significant barrier to justice.

Nonetheless, if either of the Questions passes and survives potential political interference, it will make a real difference in the lives of thousands of Oklahomans each year who would otherwise be criminalized. 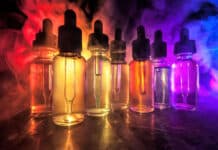 16 Years For One Ounce Of Weed