THC, a molecule that affects the human mind and body, is not “the” active ingredient in marijuana (there are hundreds).

But since THC is the best known cannabis compound—and since THC helps get you completely ripped—THC is the most important ingredient in weed for state and federal lawmakers skeptical of legalization.

That would be why pushes to limit the amount of THC allowed in legal cannabis products are gaining momentum in the states, and why future federal legalization proposals are likely to include some kind of THC cap.

And the idea of limiting THC in (legal) cannabis is catching on in Congress.

On Wednesday, Sen. Dianne Feinstein (D-California) and Sen. John Cornyn (R-Texas), who jointly chair the Senate Caucus on International Narcotics Control, released a report in which they proposed various regulations on legal cannabis to protect “public heath and safety.”

Among these was a call for the National Institutes of Health to “intensify its research on the short-and long-term impacts associated with high potency cannabis and to make a recommendation, jointly with the Food and Drug Administration (FDA), as to whether states should cap the potency of products that may be sold.”

Neither Cornyn nor Feinstein—the latter of whom has been a reluctant (at best) supporter of legalization, despite representing one of the oldest legal marijuana markets in the world in Congress—spelled it out, but the report, along with moves at the state level like Florida’s, is fueling speculation on Capitol Hill that THC caps may end up in future federal marijuana reform bills.

Cornyn and Feinstein’s report “reeks of the reefer madness of decades ago,” said Justin Strekal, the Washington, DC-based political director for the National Organization for the Reform of Marijuana Laws (NORML). “Recriminalizing cannabis via THC caps will simply push the existing consumer base from the legal market to seek out similar products in the unregulated illicit market.”

It’s generally understood that cannabis has become “stronger” over the past few decades, with more sophisticated breeding, cultivation, and extraction techniques increasing the amount of THC by volume.

Less understood is exactly what higher THC cannabis does, at least biologically. Politically, high THC levels have become an easy and convenient cudgel for legalization opponents.

There is some precedent for this. Other states, including California, limit the amount of THC in edibles but place no limit on THC allowed in smokeable products. And Illinois places an additional 15 percent tax burden on cannabis products with more than 35 percent THC.

Okay, but so what? Other products sold in the United States limit how much of whatever ingredient is inside; why not cannabis?

For one, critics say that arbitrary THC limits place a burden on low-income medical cannabis patients, who are forced to purchase more product, with unnecessary filler, at a higher cost in order to obtain the same relief.

The other critique is that THC caps like Florida’s are arbitrary—there’s no scientific or public-health reason for a 10 percent cap—and just another way to make legalization more difficult as a way to satisfy legalization opponents.

(There’s also no clear indication that it’s THC levels that are to blame for any negative outcomes related to marijuana use.)

Last month, Senate Majority Leader Chuck Schumer declared that the current Congress would introduce and pass some significant federal marijuana reform. Doing that will require 60 votes in the Senate, and convincing ten Republicans (and Sen. Joe Manchin, D-WV) is going to take some serious negotiation.

In other words, capping THC on legal cannabis products would be a way to reintroduce policing into the cannabis equation. It would be a return to something closer to the status quo. And in a United States run by President Joe Biden, whose entire political identity is based on the concept of “back to normal,” THC caps are absolutely part of the legalization conversation. 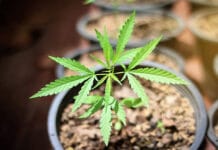