When then-president Donald Trump signed the 2018 Farm Bill into law, he had no idea he was accidentally federally legalizing the right to be high off marijuana across the United States. Delta-9 THC, the usual psychoactive component of the cannabis plant, is banned in legal hemp, but Delta-8 THC is legal, and it has similar effects on the human mind.

Delta-8 THC was legalized by mistake due to lawmakers not being aware of this compound, which remained very obscure until a couple years ago. Now, some states are backpedaling on the legalization of Delta-8 THC.

Starting in July 2021, Connecticut businesses can only sell Delta-8 THC if they are licensed marijuana sellers, for instance, following a newly passed law. New York banned it the same month just after legalizing marijuana. Vermont banned it in April of this year, alongside Washington state and North Dakota. Colorado, Alaska, Arizona, Arkansas, Delaware, Idaho, Iowa, Mississippi, Montana, Rhode Island and Utah all have some measure of regulation or ban on Delta-8 products. Michigan is the latest in the list, as our neighbor’s stranglehold on Delta-8 THC will only come into effect in the fall.

Against all expectations, Wisconsin is one of 28 states that have passed no significant ban on Delta-8 THC to this day. CBD retailers within the state are free to sell it, and since it is federally legal, Wisconsin customers can purchase it online and get it delivered to their doorstep.

Why Ban Delta-8 THC?
In some states, such as New York and Connecticut, Delta-8 THC is not banned so much as it is corded off, so only licensed marijuana retailers are allowed to sell it. It puts increased focus on regulating THC products and ensuring that the Delta-8 sold is actually what it claims to be. One of the issues with “wild” Delta-8 sales is the numerous instances where the products failed to meet standards of potency and sometimes even safety. By corralling Delta-8 together with regular Delta-9 THC products sold by the legal marijuana industry, these states bring them up to a high standard of testing and regulation before being available to consumers.

However, the first and obvious reason why anyone would want to ban Delta-8 THC is the same reason why the same people want to ban regular marijuana. In other words, it’s not a very good reason. Delta-8 being legal allows Americans to get an easy, cheap and legal high comparable with recreational marijuana, and many lawmakers want to avoid that.

Kentucky is in this peculiar situation, and the state’s attitude towards Delta-8 THC made the news repeatedly. Delta-8 THC is still perfectly legal there, but the state’s department of Agriculture released an opinion piece deciding that Delta-8 is to be treated as if it were illegal—which it isn’t. Regardless of its legal status, police raids on legal hemp stores have been numerous, and the Kentucky Hemp Association is now suing the state for denying them their federal right to sell Delta-8 THC.

Federal law, due to being poorly researched and poorly written, forced Delta-8 THC is a grey area—in large part due to Kentucky Sen. Mitch McConnell, who was driving the hemp legalization bill forward.

Delta-8 is technically legal, as the 2018 Farm Bill legalized by default every component of the cannabis plant except Delta-9 THC; but Delta-8 was never supposed to become legal. This is something that the Drug Enforcement Administration tried to change that with a rule published in 2020 claiming that all “synthetically-derived tetrahydrocannabinols remain schedule I controlled substances.” It is a technical point, but hemp-derived Delta-8 THC requires a process that can fall under the description of “synthetically-derived THC.” Not all Delta-8 is concerned, but it is enough for some states to shut down Delta-8 production following the DEA’s recommendations.

So what is to come? For residents of most states, Delta-8 THC is still fully legal and unregulated, but states have been moving so fast in reaction to the sudden realization that Delta-8 was legalized and the subsequent economic boom that it seems likely the federal government will act. Hopefully it follows the example of Texas, which tried to ban Delta-8 but failed to do so, or states like New York and Connecticut, who are simply folding Delta-8 into an existing, regulated and legal cannabis industry, rather than a blanket ban. 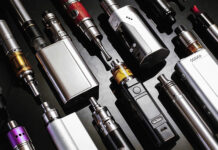 Toxic Risks In Your Vape?