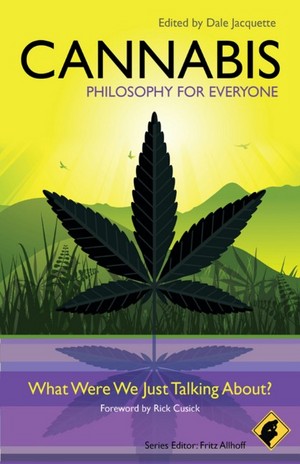 This book is 241 pages, including bibliography and notes on contributors. Normally, I could read a book this size in one or two evenings…..but there was a warning posted on the cover: What Were We Just Talking About? And that pretty much sums it up! This book covers all aspects of Cannabis; legality, physiology, morality, mysticism, and the fun side. The contributors range from PhD’s and MD’s, to poets and regular guys and gals on the street. Some of the essays read like articles from a scientific journal….very dry, objective and measured. Others will get you chuckling….and a few will really make you think.

Who is this book for? Well, everyone. Except I’d like to make an exception in that I do not believe you should read this book if you’re currently under the influence of Cannabis! It’s fine to read a paragraph or two, but if you read this book high, you’ll forget most of what you read and will not derive the most benefit from the thought contained therein.

I think the people who should read this book are those who are “on the fence” regarding marijuana legalization. I also think that EVERYONE who plays a part in the battle for sensible marijuana laws needs to read this book twice (I did) cover to cover.

The reason I say this is because in this short book, the reader will be exposed to a brief, but concise history of the War on Drugs, the dangers and physiological effects of Cannabis, and become somewhat familiar with the culture of Cannabis and how it has changed throughout the ages. This plant has been cultivated and enjoyed since the dawn of civilization, and probably before that! Prohibition and the demonization of Cannabis is a very new development.

This book will tell you all you need to know about Cannabis if you are unfamiliar with the effects and don’t feel like trying it for yourself. Those of us who already enjoy this wonderful plant don’t need anyone to tell us it’s harmless and fun…..but others who are still forming opinions based on government propaganda will greatly benefit from the wide range of information contained in this book.

The highlights for me are numerous, but if I had to choose just one part of the book to be my favorite, it would have to be the section written by Dr. Lester Grinspoon, MD.

In every life there occur seminal events that modify the seemingly established probable trajectory of one’s personal history. For me, there have been four. The first three were, in order of importance, the extraordinary good fortune of meeting the woman I married, the gift of children, and the decision to go to medical school. The fourth was my improbable encounter with cannabis, an event that divided my life into two eras……..My cannabis era began to unfold in 1967……..Because I had become concerned that so many young people were using the terribly dangerous drug marijuana, I decided to use the time to review the scientific literature so that I could write a reasonably objective and scientifically sound paper on the harmfulness of this substance……..it never occurred to me that there were other dimensions of this drug that warranted exploration.

And it wasn’t more than a couple years after researching this “dangerous drug” that Dr. Grinspoon became a regular user of Cannabis and went on with a stellar, very productive academic career. He thought he was going to help people realize how dangerous marijuana was, but instead found it to be harmless and helpful!

In a very small, limited way, Dr. Grinspoon’s relationship with weed mirrors my own. I also began regular use in my adult, married, fatherhood years. I am also in the medical field, and I am a daily user of Cannabis. I don’t look like a stoner, think like one, dress like one or anything else. And yet, I enjoy Cannabis as often as most “stoners.” This plant can most definitely be used in a beneficial manner!

Other people with different backgrounds will no doubt prefer some of the other contributors and their style and something they say will resonate in a different way to different people.

I think that is what the authors were attempting to do with this book; create a portal of education about Cannabis that people from any walk of life could walk through and come out with a solid, basic understanding of Cannabis and the people who enjoy it.

If you’re in your early 20’s and are simply getting stoned on the weekend when it’s available, you should also read this book. It will tell you where it got started, why it’s the way it is, and most importantly you’ll be able to draw conclusions as to how things should be, based on science, anecdote, morals and ethics, with large doses of common sense thrown in…………….

What were we just talking about? Oh, yeah……Cannabis philosophy.

Cannabis – Philosophy for Everyone: What Were We Just Talking About