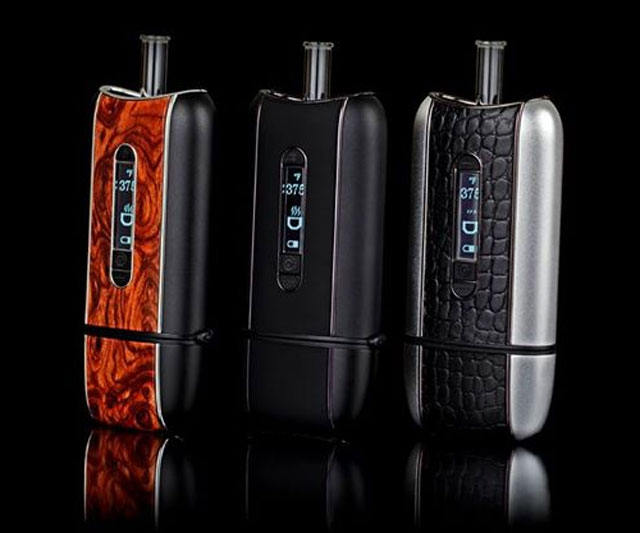 Well, I’ve had this delightful device now for two weeks and I’ve used it alone, with my wife, and twice with four other friends, passing it around. I feel like I know the device well, have used it in all its intended methods, have heard feedback from others and have ample familiarity to write a review, so here goes! I’ll be including not only my own observations but also drawing on those from people who enjoyed this device with me during the last two weeks.

First of all, this vape is rather heavy, in a good way. It feels rugged and well made upon first contact, and during the time I’ve had it I’ve taken it apart for cleaning twice. The cleaning process is quite easy; basically removing 2 glass stems, soaking in isopropyl and using pipe-cleaners and Q-tips dipped in alcohol. 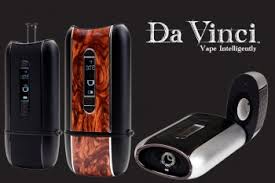 The device is deceptively simple: A heated ceramic bowl is located on the bottom of the unit, and immediately above this bowl is a glass tube that guides the vapor to the user. Ceramic and glass, this is a very healthy combination. There were zero solvent/plastic/manufacturing smells and tastes during the initial use of the vape, as I’ve experienced with other hand-held units. The simplicity and cleanliness of the Ascent definitely makes life very easy.

The company is nice enough to include a spare glass tube and mouthpiece with the unit, so “cleaning” is really as easy as removing a couple glass pieces, putting them in alcohol and replacing them with the clean ones. It takes less than a minute to have a completely free vapor path, including the time to clean the ceramic bowl with a q-tip. It gets an A+ for ease of maintenance. 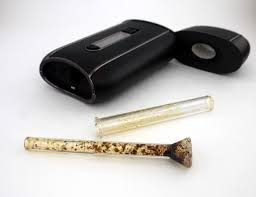 Another very cool feature is the ability to order your Ascent vape with your personal choice of any color/pattern featured on the company’s website. This makes “his and hers” gifts quite natural and as we’ll see below, you’ll want to have two of these if you expect to vape at concerts and away from home. The DaVinci Ascent gets an A+ for aesthetics! It looks very much like an older cell phone, so there is also an element of “hidden in plain sight” with this vape.

It comes in a lovely package, with a 110 charger, 2 glass vapor tubes, 2 glass mouthpieces and 2 glass concentrate jars, with some stickers. There shouldn’t be any breakage during shipping, because the packaging is excellent, and by design the vape isn’t going to be breakable, even if you drop it, which I did. The glass vapor path is tightly sealed in silicon, so as long as the mouthpiece isn’t extended, this vape can take some punishment. 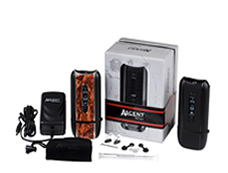 So, let’s get down to business and talk about how this thing works in the real world!

Turning the vape on requires a short finger nail and a firm push on a tiny button on the mouthpiece side of the unit. I had no problem depressing the button, but my wife could not do so without breaking a nail.

Once turned on a simple, intuitive interface with LED display appears, with up and down adjustments for temperature, and a “settings” button, all of which are easily navigated. The vape will remember the last temperature upon turning off, and the user can program up to 3 “personal” vape settings, which essentially means setting a temperature and a timer. 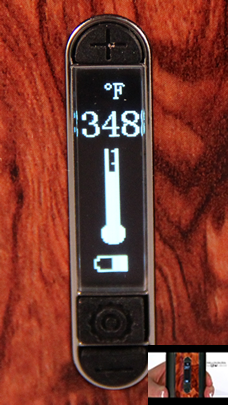 I did not see any value in the personal vape settings, because it was actually easier to just turn it on and adjust the temperature.

There is also an option that allows the user to set the motion-detector timer, which will turn the unit off if you set it aside and forget to turn it off. This is very likely to occur when using medicinal cannabis. The factory default setting seemed to work just fine, so I didn’t bother changing the timer.

The digital temperature display is quite good, and the temperatures appear to be accurate. If you like vaping your herbal material at 290, 370, 420 degrees or anywhere in between, you can easily to this with the up/down buttons. This is fantastic, as the terpene profile can be customized by altering temperatures.

One little trick I learned was this:

For a high CBD vape session, load the bowl and turn the temperature to 370. When the vape gets up to temperature (within seconds) blow through the bottom of the vape 3 or 4 times to vaporize all the THC, then turn up the temp to 420 degrees and start vaping from the “correct” end and the result will be a higher CBD medical dose. This is a must-have option for medical users who desire to customize the terpene and cannabinoid profiles of their medicine. I give this vape an A+ for medical applications!

The quality of the vapor is top notch, due to the accurate temperatures and the ceramic-to-glass vapor pathway.

Loading the bowl with dried herb is super easy. Twist the bottom of the unit, pour in some ground product, twist the bowl back the other way and that’s it! There are no parts to fall off or lose. 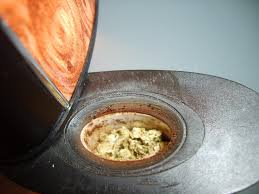 With dry herb use, a person can expect 4-6 good draws before the material is used up. I was able to use the vape consistently for about 2 hours before needing a recharge, which takes 5 hours.

Overall, I give the DaVinci Ascent an A+ for a portable, dry herb vaporizer. It’s absolutely fantastic for dry herbs and I can’t imagine anything being much better. I own two top-of-the-line table top vapes and the quality of vapor produced by the Ascent is every bit as good as these much more expensive, much less portable vapes.

Ah, but the Ascent is marketed as a dry herb AND concentrate vaporizer! That’s what those little glass jars are for, concentrates. This feature got me very excited at first, because when I saw those little jars I immediately thought of filling both with concentrated medicine and switching them out when one is used up. I had visions of being at a concert with 12 or so good, deep hits of concentrate just waiting for me, with the ability to switch strains as easy as a Keurig coffee machine!

First of all, the jars come with a little silicon “lid” which supposedly keeps the hot, sticky oil from getting all over the place. The lids simply don’t work. They don’t go back in the jars properly, and get pulled out by the vape when you close it. How cool would it be to change jars in order to re-load? It would literally take a second! 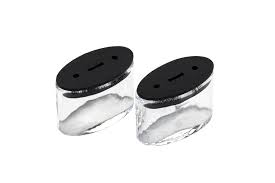 But alas, after my first few hits of concentrate (and they were FANTASTIC) I opened the ceramic chamber to find a gooey, sticky mess.

I assumed this was because I didn’t put the silicon “lid” on properly, so I tried again, more carefully with the next jar, same problem. The directions said concentrates could be vaped without the lid, as long as the unit remained upright. While rather impractical, my quests “forgot” to keep the unit upright at times, even when being careful, a gooey, sticky mess resulted.

I tried again, same result. The Ascent made great, no make that INCREDIBLE vapor, with a big mess to clean up afterwards.

Because I really wanted this vape to work with concentrates (and I fixated on the idea of pre-loading little glass jars and swapping them out at the concert) I continued to search for a way.

I came up with a “hack” that made concentrate use slightly less messy. My solution was to take a metal sponge (from another vaporizer manufacturer) and put it in the jar, and then drip the concentrate into the metallic sponge until it was saturated. 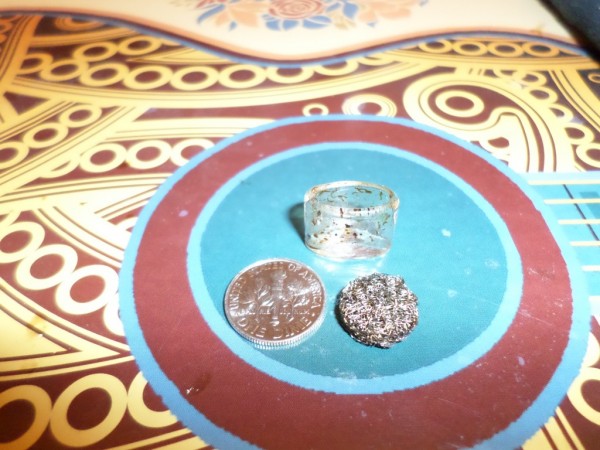 Now the unit worked! Cleanup was still necessary after limited use, nothing near as easy as with dry herb, but it was workable. I can swap out 2 jars before the vape gets too sticky and messy for pockets. But my fix only made the unit workable. It still isn’t “right” for a concentrate vaporizer. In fact, I do not use the unit for concentrates as I have several pens that work well, with no mess to clean up.

The inability to vape concentrates was a big disappointment for me, because the DaVinci does indeed produce excellent vapor from concentrates, but the mess is simply untenable. I give the DaVinci Ascent a C- for use as a concentrate vaporizer.

For dry herbs, the DaVinci Ascent is a true masterpiece. But alas, it is disappointing as a concentrate vaporizer, not because it doesn’t produce excellent vapor, but because it makes a mess that can’t be cleaned up on the go. Even though it works a bit better with my metal sponge hack, it still isn’t something I’d choose for concentrates, because of the messiness.

But wow! It sure does the dry herbs well!

If a person carries a little vial of ground up herb, a re-load is possible very quickly:

Open the ceramic bowl, blow out the used material and gently pour in new herbal material and you’re ready to go. Four people were able to pass this unit around and everyone felt quite at ease sharing two bowls. The flavors are fantastic, better than other portables I’ve tried, and rivaling the very best table tops.

For this reason, I decided that the way to tackle a concert is to have two vapes and reload each once or twice. My Keurig-like fantasy about a convenient, pre-filled jar of concentrate will remain a fantasy for now, but until then, I’ll continue to enjoy using the DaVinci Ascent as my go-to dry herb vaporizer.

The little Ascent is rugged, attractive and very effective at producing vapor. I’d say it easily rivals the very best vaporizers on the market when it comes to producing vapor. If it wasn’t also marketed as a concentrate-ready vape I wouldn’t a single negative thing to say.

If you’re looking for an excellent, portable dry-herb vaporizer, look no further. The DaVinci Ascent fits the bill perfectly.

But if you’re hoping, as I was, that the Ascent also works well for concentrates, you’ll be disappointed, but not because the Ascent doesn’t produce superb vapor from concentrate. I can’t stress enough that the quality of vapor is excellent, it just makes a sticky mess when used with concentrates. The “fix” I outlined above is helpful, but I’m sure the manufacturer is going to come out with some new engineering to deal with this issue.

I certainly hope so, because every other aspect of this vape is nothing short of brilliant.