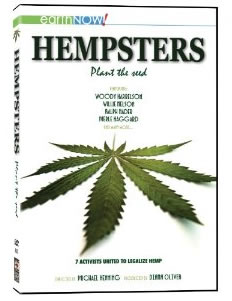 Hempsters: Plant the Seed is a documentary regarding the courageous battle of those who would like to see the hemp plant legalized for industrial use. The film focuses on several activists who try to change the thinking, preconceived notions and laws regarding industrial hemp and it’s possibilities as an agricultural crop. Celebrities and politicians like Woody Harrelson, Willie Nelson, Merle Haggard and Ralph Nadar – to name just a few – lend their clout in helping get the message to the people regarding the numerous benefits of this amazing plant.

Hempsters lays out a convincing argument for the case of industrial hemp, and outlines in a clear, concise narrative for the many benefits of the crop. Specifically, the film focuses on farmers and how hemp can help save many of our nations family farms. Additionally, the film educates us on the positive impact hemp production can have on the rest of our natural environment by helping conserve other valuable resources such as our nations forests. The arguments against industrial hemp farming are convincingly and repeatedly debunked by outlining the crops acceptance in most other industrialized nations, and illustrating just how ridiculous the DEA’s arguments are against hemp production. The film also focuses on the over-zealous DEA’s attempt to prohibit the Lakota Sioux tribe from growing hemp within the confines of their sovereign nation, leading members of the Lakota tribe to question the very nature of their sovereign nation status as agreed to with the United States federal government.

Why You Should Watch It

This film is filled with inspirational figures and champions of the hemp movement. Woody Harrelson is featured throughout the film, in part for the boldness by which he symbolically plants four industrial hemp seeds in a Kentucky field, knowing he will likely be arrested and taken to trial for doing so (he was). Another inspirational figure is Gatewood Galbraith, former candidate for Kentucky governer, also a courageous and truthful leader of the industrial hemp movement. Notable activists like singer Willie Nelson help bring attention to Galbraiths efforts and the movement in general, as convincing arguments are made for hemp’s case as a possible savior to the american farmer (with specific emphasis on the Kentucky farmer). Finally, the films pace and storyline moves along in such a way to keep the viewer engaged and makes a lasting impression through it’s message.

Hempsters also highlights less known activists such as Julia “Butterfly” Hill, who lived in a Humboldt, California Redwood tree for more than 2 years in order to bring awareness to the clearcut deforestation being undertaken by Pacific Lumber. While her portion of the film was incredibly inspiring, I found myself questioning the connection to the rest of the premise a bit lacking, as it seemingly had few direct ties to the industrial hemp movement as featured in the rest of the documentary (though there were certainly plenty of indirect ties).

Last but certainly not least Alex White Plume, a member of the Lakota Sioux tribe, is featured for his efforts to grow hemp within the Lakota Sioux nation. Particularly infuriating is the DEA’s persistent attempts to destroy his hemp crops, despite the questionable authority of the DEA to do so within the confines of another sovereign nation. The 85% unemployment within the Lakota nation not withstanding, Mr. White Plume is repeatedly thwarted in his attempts to grow a crop that can significantly help his people. His story serves to both anger and inspire the viewer – anger over the ridiculous, and questionably legal tactics of the DEA, and inspire over Mr. White Plume’s dogged determination to do what he thinks is right, regardless of the outcome.

Hempsters: Plant the Seed is a well-made film that sheds light on an egregious over-stepping of bounds by the United States government as it relates to industrial hemp farming. It makes convincing arguments for the legalization of hemp production in the United States through a multi-pronged approach. While it is specifically centered on the benefits to the American farmer, it also lays out arguments against current policy based on actions of other nations and the reasons it was made illegal in the first place. If you care about these issues, then you will indeed enjoy this inspiring film.