What a treat it is has been to use this little gem of an e-liquid/oil pen for the last 2 weeks. It’s not the only one I own, not at all. I have several pens using the 510 thread pattern and even some with a 650mAh battery. Who doesn’t these days?

The fact that the CBDiscreet is compatible with other tanks is a great blessing. I have cartridges of various oils from several popular and well known vendors that are designed to screw to the top of a battery with 510 threads.

Without a doubt, the tank that The Kind Pen provides with the CBDiscreet as purchased works very well. However, many users like to buy pre-filled cartridges, myself included. These widely available pre-fills work every bit as well as the tank that comes with the pen, because the magnetic 510 adapter that comes standard with the pen makes it so that many other cartidges snap into place with the same ease and security of the original tank. Smart folks designed this feature!

Another unique aspect of this pen is its shape. The footprint is about the size of a small torch lighter. Indeed, even with the mouth piece sticking out of the pen, most people thought it was some sort of lighter. This is because the tank magnetically snaps into place inside the battery unit. The entire device is easily concealed in the palm of one’s hand and fits very comfortably into a pocket. While I’ve sat on the ground with legs crossed and have actually broken a pen-shaped vape in my front pocket, the CBDiscreet lies flush in the pocket and is entirely protected.

Charging is accomplished via universal micro USB port and there is a lifetime warranty of the entire product. Yes, that’s right, if the product fails to do its job they will replace it FREE OF CHARGE, no questions asked.

This pen works flawlessly for hours and hours. A single charge on the battery gives hit after delicious hit, with large plumes of vapor. Instead of giving weaker hits as the battery drains, vapor remained very consistent right up to the end, when the battery needed charging. I nearly finished an entire cartridge on a single charge, enjoying more than enough vapor to share with a friend. Recharging was a breeze and took about an hour.

It’s my go-to pen now, mainly due to the size and shape, along with the software that allows for such consistent vape production even with a weakening battery. In an era where vaping technology is taking leaps and bounds every couple of months, this pen stands out as being ahead of the curve.

It will run many tanks and cartridges from other manufacturers perfectly. It looks like a lighter and delivers the highest quality vapor, completely free of any metallic or other strange flavors. I love this pen and will not part with it.

$39.99 buys the battery, tank, adaptor, and charger. You can even choose from seven colors. Also, as mentioned above, there is an unconditional, no questions asked LIFETIME warranty on the pen, tank and charger. You simply cannot go wrong! 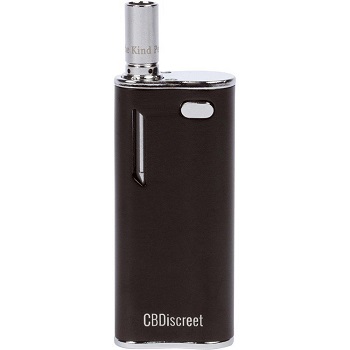