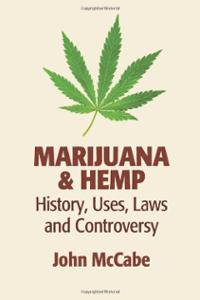 This book is a detailed, three hundred and sixty degree view of all topics related to marijuana and hemp, especially with regard to current US drug war/prohibition laws. 448 pages, followed by a detailed, exhaustive Bibliography, footnotes and appendices. As such, there are far too many fact, figures, dates, laws, edicts and judgments covered by the author to remember them all. One thing does get across very clearly, however:

The laws against the cultivation of Hemp are some of the most stupid and harmful laws ever devised by American legislators.

After carefully reading the book and exercising due diligence to vet many of the facts presented by the author I am of the opinion that this book should actually be two books: the first on Marijuana, the second on Industrial Hemp.

The subject matter presented jumps back and forth between these two very different topics in such a way that I found myself often confused as to which was which. There is also extensive use of long quotations from various sources interposed with the author’s own voice which also require the reader to pay close attention with regard to who is saying what.

The information on Marijuana was extensive and typical of the many books appearing in the last several years. Extensive evidence of Marijuana’s medicinal uses was presented, along with a great many examples of the sheer cruelty and idiocy of the government’s policies towards the same. An detailed history of Marijuana law is included, although many times in piece-meal fashion.

If a reader wanted an excellent history of Marijuana’s journey from useful medicine in the 19th century to Schedule 1 Drug in the 20th century, I’d refer the reader to get the book “Smoke Signals,” which I have reviewed elsewhere on this website. Smoke Signals offers the same information in a more readable fashion.

However, Marijuana and Hemp really stands out for its detailed exposition of all things related to Hemp. This is an important topic and one that I found myself to be more than a little ignorant of, especially when it came to the many, many uses of Industrial Hemp.

Hemp is illegal simply because it looks like it’s psychoactive cousin, Marijuana. Industrial Hemp has no ability to get a person “high.” It isn’t dangerous to animals or humans in any way, shape or form. No “drug war” argument can be made against Hemp…..hemp prohibition is simply stupid policy. Period.

This fact is presented in a clear, unassailable, factual argument. No intelligent reader can come away from reading this book without thinking Hemp should be legal in America.

I wish this book had just stuck to Hemp! I learned much more than I had ever bargained for with regard to hemp, even if the information on marijuana was pretty mainstream and well known.

It is my opinion that this book would have been much easier to read and would have wider readership if it did not include so much information on marijuana, which I believe casts a negative light on the topic of Hemp.

Hemp is a much better source of paper, clothing, bio-diesel and many other items than the “legal” substitutes we are forced to use today. Growing hemp is definitely in the public interest.

Hemp is a good soil mender, it controls weeds and can detox soils that have high salt and metal content.

As a result of reading this book and learning all this new information, I am of the opinion that banning hemp cultivation is one of the dumbest things ever done by the government! What makes it even worse is the fact that hemp is allowed to be farmed in Canada and Europe, and that this can be imported into the US and made into all kinds of useful items….but it is illegal to grow simply because it looks like Marijuana!

I highly recommend people educate themselves with regard to hemp! This book contains all you need to know, but this information isn’t presented in a linear, chronological fashion and is often interspersed among information regarding marijuana, which means the reader must “work” a bit more than normal, making the overall reading of the book less enjoyable than it could be.

In spite of my criticism of this aspect of the book, the author gets the “Hemp” point across loud and clear! I learned a ton of information and do not regret reading the book in any way.

While I wish the author had written two books, or at least separated the material into two different sections, I can still highly recommend this book for any person desiring to educate themselves with regard to hemp laws.