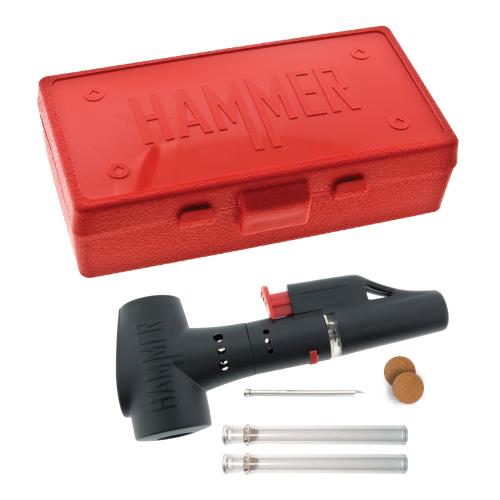 There are a lot of small, portable vaporizers on the market these days. I’m glad for this, because the longer I use my stationary vaporizer at home, the more I detest “smoking” anything. It just starts to seem, well… a bit nasty to me. I don’t care for “smoke” and the smell that goes with it any longer – like many, I’ve become much more health conscious as I mature. With this in mind, I was excited to try the “Hammer” portable vaporizer as I really love the idea of vaporizing portably and have been doing so with a battery powered unit for a while now, despite it’s limitations. I’ve also been itching to compare a good portable butane vaporizer to the battery powered unit I currently own, mindful of the weaknesses with my battery powered vaporizer.

The unit I received was packaged and branded nicely. It had an interesting, somewhat industrial packaging motif that seemed fitting given the product name and branding. The outer plastic case calls to mind a container in a tool box, for example.

Another interesting touch? The tool for inserting the screen or stirring herbal material is a literal “nail”. While it’s perhaps not as practical as some other companies approaches to this sort of utility tool, it’s definitely a clever touch and fits well with the branding. It is a bit clumsy in some ways though, and probably better for branding than it’s actual utility – still it does work fine once you get used to it.

The “Hammer” is also attractive enough, easy to hold and use, and fits in your pocket. It looks tough, too. It’s operated much like holding a lighter, so for those who are new to vaporizing from smoking, there’s a feeling of familiarity there that many will like.

The Hammer was a breeze to use, and took very little time to get the hang of. I found it easier to get used to using than both my stationary vaporizer, and the battery powered portable I own. Because of it’s design, it’s best held like a “torch” lighter, and fits comfortably in your hand.

The “Hammer” is easily and quickly filled with butane in a matter of seconds, so there’s no need to have charged batteries or plug something in – a weakness with the battery powered portables. The heat exchanger is sufficiently heated and ready within 30 seconds, so it’s very quick compared to some. Heating between inhalations goes much quicker, as the heat exchanger will retain some heat temporarily. After the first inhale, I found the subsequent “hits” took less than 10 seconds to heat the air exchanger.

The air you inhale with the “Hammer” passes through a unique heat exchanger specially designed to keep butane out of the airway. A great idea, though unfortunately some unpleasant butane smell/taste seemed to want to creep in anyway, despite repeated practice, adjustment and testing. It wasn’t terrible, but I found it wasn’t quite as “clean” tasting/smelling as described in the marketing materials either. Overall I’d say it’s a relatively minor quibble given the many other benefits of the device. I commend them for the uniquely clever design and efforts to minimize this, even if there’s some slight residual odor regardless.

Another nice feature of the Hammer, is an adjustable temperature control dial. Adjusting the dial works nicely to get the temperature just right for the draw speed upon inhaling. Side-note: For those new to vaporizing, there is always a bit of a learning curve when it comes to inhaling and temperatures, as the rate of inhalation affects the temperature of the air. Overall, I found the Hammer easy to adjust for my draw/inhale speed, and adjusting it down helped limit the small amount of butane smell/taste as well. The temperature control is a very nice touch, and a great feature not found on all portable vaporizers.

The quality and strength of the Hammer’s vapor is exceptional. Unlike the lighter, wispier vapor from my battery powered portable, this is some real, thick, quality vapor. I think this will hold much attraction for those used to smoking, as this is no lightweight vapor being emitted.

The unit I reviewed came with included the 2 standard mouthpiece, as well as a pair of “extra deep” mouthpieces. My first reaction to the wands, was a bit of surprise at the small “bowl” it incorporated. While the deeper mouthpiece is an improvement, the smallish, narrow opening seems slightly less than ideal. However, I was very pleasantly surprised at just how efficient the Hammer was, as a small amount of herbal material seemed to go a very long ways – especially given the strong vapor emitted. The “Hammer” really shines in this respect, as who doesn’t want their herb to last longer? Perhaps it’s a personal preference, but I still found myself wishing the bowl was a bit wider or larger – though the optional “deeper” bowl mouthpieces were a nice improvement to the standard ones.

Comparison to Battery Powered Portable Vaporizers – a “Give & Take”

There’s no doubt that the 2 popular methods for portable vaporizing each have their own unique strengths and weaknesses. Unfortunately, neither is a quite perfect, polished experience at this point in time, so it becomes a matter of personal preference.

Battery powered portable vaporizers are a bit quieter (virtually silent), and leave no funky butane smell whatsoever. But, you need to have charged batteries on hand, and they give a pretty weak vapor overall – at least in my experience. Because of the lighter quality vapor, they can sometimes require more effort to get the desired effect – something that an impatient person might find frustrating. They are by their very nature, though, very stealthy units as they are nearly silent and give off almost no odor.

On the other hand, the Hammer is quick to use, refill and gives a strong vapor. You don’t have to worry about pre-charging batteries, either. The Hammer seems to be very efficient, also, making up somewhat for the smaller bowl on the mouthpiece. I really was surprised at just how much I got from a very small amount of herbal material – it felt like nothing was wasted. Unfortunately, the Hammer is a bit noisier than a battery powered vaporizer. Though most of that noise is in the ignition itself, which sounds a bit like lighting a butane torch. Again, turning the temperature knob down slightly helps with this, but there’s still some noise there. Finally, it seems that no matter how hard I tried, there was still a very slight odor/taste due to the butane. Because this is the first “butane” powered portable I’ve used, I can’t compare it to other butane models, but I’m assuming it’s a bit better than some due to some clever engineering – though still not as “clean” tasting as the vapor in my battery powered unit. Having said all that, the folks that make the “Hammer” use quality glass mouthpieces and they take some effort to make the inhale as clean as possible.

Why You Should Buy the Hammer

If you are thinking of going from smoking to vaporizing, and want something portable, you might love this unit. It’s much closer to a smoking experience than other portable and even non-portable units I’ve tried. The quality and thickness of the vapor is excellent. It’s size makes it “pocketable” so it can be taken with you (for longer trips from home, bring a small container of butane for a refill). They’ve made a clever and effective effort to minimize, if not eliminate butane taste and smell – that I’ll assume is an improvement over other butane portables. They also have a great website with a FAQ section and plenty of tips on properly using the device. It also comes with a 1-year, limited warranty and looks to be very sturdily constructed and durable.

If stealthy use is your biggest concern, the Hammer might not be the best choice for you. The torch-like sound upon igniting and the slight odor of butane that escapes make it a little less stealthy than a battery powered unit. That’s not to say it’s “loud” or “stinky”, it’s not – but the stealth aspect is a bit better served with a small battery powered unit overall. Maybe it was just the unit I got, but I could still smell and taste the butane slightly – and this might be a deal killer for some who are more sensitive to this sort of thing.

As mentioned, the portable vaporizer market remains a choice between priorities, as the technologies all have unique strengths and limitations. I really like the “Hammer” and plan to use it without hesitation, especially when stealth isn’t necessary or if battery charging is unrealistic. For super stealthy usage, I’ll keep my battery powered unit as well – for those times silence and smell are of utmost importance. If you are moving away from smoking, this may be a really great option, as this replicates that experience more closely than any other vaporizer I’ve tried.

Some pics of the Hammer and it’s packaging: 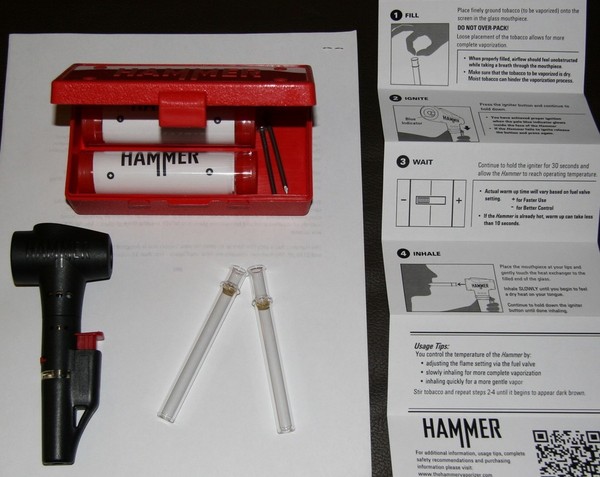 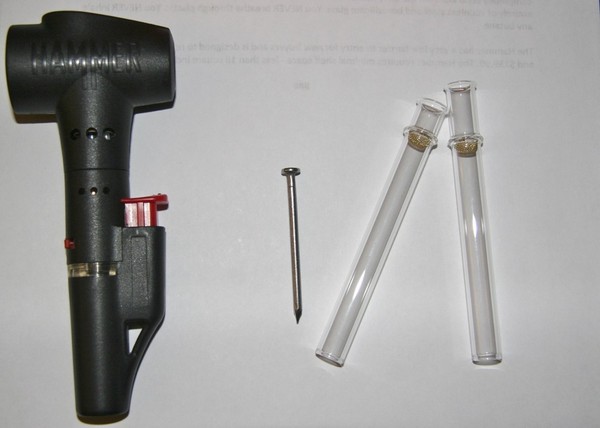