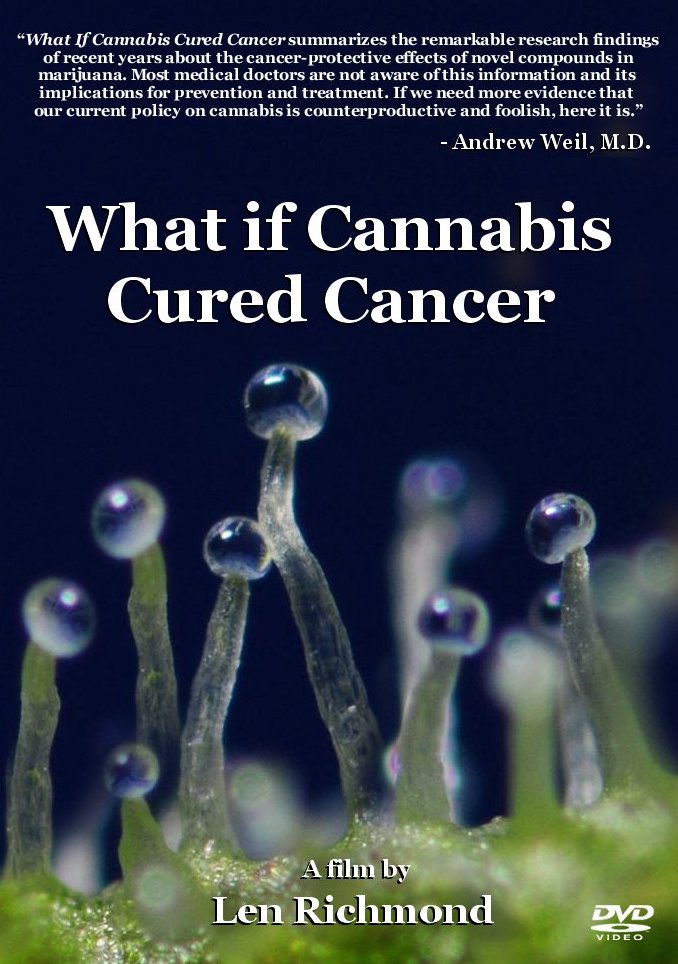 Few documentary films have made the impression on me that, “What if Cannabis Cured Cancer?” by Len Richmond has. The film both moved me and made me angry that we’ve kept the benefits of cannabis from being fully realized to this point in history. It makes a powerful argument for the further study of medicinal cannabis, and against it’s wrongful prohibition.

Narrated by Peter Coyote, the gifted actor, narrator, and social activist, this film has a professional feel, with a down-to-earth delivery. There is a nice blend of history and science, and much of the information is presented by researchers who have worked with and studied the cannabis plant and it’s many medical uses. Despite a large amount of scientific evidence presented, the information is easy to understand and digest. Also, it goes to great lengths to point out that there is still much research to be done on the medical benefits of cannabis, but many forces are working against this – mainly government agencies and pharmaceutical companies who cling to suspect motives and/or outdated and incorrect information.

The film starts by educating us on the history of cannabis, even suggesting that it may have even been the first cultivated plant. Another theory proposed, is that cannabis may have helped speed up language development in humans, and propelled a great leap forward in logic for early man. These theories are only lightly touched on, as to not draw attention away from the main premise of the film. The history of cannabis as an 1800’s oft-prescribed treatment for a variety of ailments is also covered, and there is even mention of Queen Victoria’s use of cannabis for painful menstrual cramps. Finally, there is a good summary of how cannabis became illegal as the “next target” of the former alcohol prohibitionists, infamously led by Harry Anslinger. This history is successful in helping the viewer understand the current state of medicinal cannabis and it’s oft-misinformed detractors.

Cannabis history, prohibition, and eventual illegality are interesting topics, but the idea that cannabis may cure or prevent cancer is really the heart of the film – as the title itself suggests. A particularly compelling quote from early in the film, that really sets the stage:

“Dozens of major studies have been published in the last few years, that indicate the chemicals in cannabis, in the lab and in animals, have a significant effect on fighting almost all major cancers, including: brain, breast, prostate, lung, thyroid, colon, skin, pituitary, melanoma, and leukemia cancers.”

Mr. Richmond’s documentary spends a good amount of time backing up the cancer claims with research and hard facts. It also elaborates on the human bodies built-in endocannabinoid system, as well as the critical role it plays in our overall health and well-being. The film suggests that this system was sufficient to protect us for thousands of years, until recent history which finds our world filled with unnatural pollutants. Furthermore, it presents evidence that cannabis can help stimulate the human bodies own endocannabinoid systems in order to neutralize free-radicals, help stop or prevent tumor growth, and mitigate or prevent a number of other health issues. The emphasis placed on the importance of the endocannabinoid system in human health is very compelling, as is the role cannabis can play in augmenting it. Mr. Richmond’s film also attempts to give reasons as to why cannabis may have these synergistic properties.

In addition to cancer, the role cannabis may play in helping treat several other illnesses or diseases is addressed, too. Multiple sclerosis, schizophrenia, and diabetes are mentioned, just to name a few. In fact, the film suggests, it may be partially due to this broad-range of medical benefits that there remain so many skeptics. For many, the idea of a “wonder-drug” with few side-effects is just too good to be true, but this film clarifies specifically why cannabis may indeed be worthy of this title.

What if Cannabis Cured Cancer? is brilliantly made and is one of the most compelling documentaries I’ve seen – on any topic. The medical research and their conclusions are presented in a concise, eye-opening manor, and difficult to dismiss. The film should cause even the most cynical cannabis detractors to rethink their position, and the most passionate cannabis advocates to become further inspired by their mission. What if Cannabis Cured Cancer is a must-see documentary, and a nearly perfect argument for the end of cannabis prohibition as we know it.

Copies can be purchased here What If Cannabis Cured Cancer