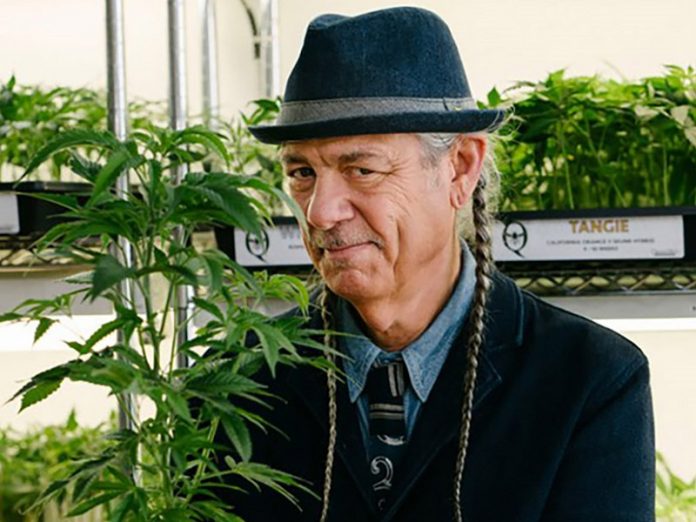 A life well-lived in the cannabis movement – Steve DeAngelo is an inspired leader, with close to four decades of activism and advocacy in the cannabis reform movement. His vision and leadership have been featured by news teams from around the globe, including major news outlets in the United States, Canada, Japan, Germany and the United Kingdom. The media has featured Steve DeAngelo’s landmark Harborside Health Center in their coverage in the emerging cannabis industry in California and nationwide for a reason; Harborside Health Center has established a unique, nonprofit model of legitimacy and professionalism. It is a place where safe access, compassionate and responsible use, and high-quality, lab-tested medicine is offered to patients in great need of relief from a wide range of medical conditions. Patients come first at Harborside.

Steve has been featured by The New York Times, The Washington Post, CNN, the Associated Press, The Wall Street Journal, NPR, the BBC, Fortune Magazine and literally every major network news source in the country. His creation of a model medical cannabis dispensary and lifelong cannabis activism, coupled with his extensive knowledge in this arena, has made him one of the most respected speakers in the cannabis and hemp industries.His activist education started early.

Stephen DeAngelo was born in Philadelphia in 1958 and raised in Washington, D.C., where his father worked for the Kennedy administration. Steve was heavily influenced by his parents’ involvement in the Civil Rights movement, and his time spent in India when his dad worked for the Peace Corps (1967-1969). When the family returned to the United States, the Vietnam War and its atrocities were prominent in the news. Feeling the turbulent signs of the times, young Steve began skipping school to attend antiwar demonstrations. In 7th grade he organized a sit-in at his school, in solidarity with an antiwar demonstration. By the time he was a young teenager, incidents such as the Kent State massacre made him aware that political dissent could very well result in going to jail or being shot. Nonetheless, that didn’t stop Steve. At 16 years old he dropped out of school to join the Yippies, and was the key organizer of the annual Fourth of July White House (cannabis) Smoke-Ins in front of the Capitol buildings.

Steve spent several years as a street activist, learning valuable skills in event planning, stage management, and promotion. As he matured from a teenager into a young man, Steve took his skills into the entrepreneurial arena, putting them to work in the music industry. He became an independent concert promoter, nightclub manager and record producer. He soon renovated two movie theaters and converted them to live music venues – a new model developed way before its time. He played a key role in the rehabilitation of the Adams Morgan neighborhood, with the opening of the Beat Club and renovation of Ontario Theater from movies to live performances. To this day, movie theaters are being renovated and made into music venues across the country. From the very beginning of his career, Steve has been ahead of the times, and set a new course for the future. So is the way with visionary leaders.In 1984, Steve decided to complete his interrupted education at the University of Maryland, graduating summa cum laude in just two-and-a-half years. After graduation he opened the legendary Nuthouse, which High Times magazine called a “D.C. version” of the famous Family Dog in San Francisco. During the first Bush administration, this proved to be a refuge for Washington, D.C., cannabis activists and notables, including Kunstler, Wavy Gravy and Jack Herer.

In 1986, cannabis activist Jack Herer showed up at the Nuthouse, waving a tattered tabloid manuscript of his soon-to-be-famous book, The Emperor Wears No Clothes. Jack’s book outlined the hidden history of the link between industrial hemp and cannabis, and the conspiracy to make both of them illegal. The Emperor deepened Steve’s realization that cannabis was a good plant, not an evil plant. After reading it, he decided to focus his efforts on promoting the book’s message far and wide. After helping Jack edit and publish the manuscript, Steve became a prime organizer of the first ever Hemp Museum and Hemp Tour, which brought the news about hemp to hundreds of universities nationwide.

Displayed in that tour were balls of twine made from hemp, which college students found to be an excellent material for macramé jewelry, and began purchasing in ever-growing quantities. Before long, Steve had completely exhausted the available supply of twine in the United States, so he traveled to Eastern Europe in search of a reliable supplier. That trip led to the 1990 founding of Ecolution, a pioneering company that manufactured hemp clothing and accessories, and exported them to retail stores in all 50 states and 21 foreign countries. This company again enabled Steve to cross-pollinate his extraordinary leadership and activism skills – and established Ecolution as the most professional and mainstream U.S. hemp company.

Steve sees hemp and cannabis as one issue, not two. He believes that the 1937 legislation that made cannabis illegal was passed due to influence from corporate interests like the Hearst and DuPont Corporations, which saw hemp as a threat to their investments in timber and plastics.

Steve arrived in California in 2000, and immersed himself in the local medical cannabis milieu. He was one of the original founding members of Americans for Safe Access, the premier advocacy group for medical cannabis patients. He wrote and produced For Medical Use Only, a short documentary film; helped organize several legal cannabis gardens, and invented a new form of cannabis concentrate. All the while, he laid plans for a new type of medical cannabis dispensary. Steve got the chance to put his plans in action October of 2006, when he won a highly competitive RFP process, and was issued a medical cannabis dispensary license by the city of Oakland. Steve launched Harborside Health Center (HHC) to bring a new model of professionalism and integrity to the industry. Harborside quickly gained recognition for its free holistic care clinic, laboratory-tested medicine, low-income care package program, cannabis-friendly substance misuse program, and wide array of other patient services. This innovative approach generated widespread acceptance and acclaim from the community, city council, and law enforcement officials in Northern California and beyond.

As media coverage spread the word of his exemplary not-for-profit business model and straightforward commitment, Steve became inundated with requests to share his vision and business acumen. In response, he created “CannBe,” a management and consulting firm which brought an A-team of medical cannabis professionals under one roof, and put them at the service of existing and prospective dispensary operators. The CannBe model emphasized local ownership and control, with a focus on legal integrity and positive community relations.

“Out of the Shadows and Into the Light” epitomizes Steve’s mission. His work to expose the myths created about cannabis, and to promote the positive science that has emerged about it, aims to enlighten the public on the many benefits of the cannabis plant.

This is an important time in history to empower the country to change its image and perception of cannabis. Steve DeAngelo and Harborside Health Center are leading the way and on the edge of the ladder in discovering and demonstrating the many benefits of this amazing plant.