Hi All, Newbie here but have been on the site collecting info. Bought 5 fem auto seeds Snowryder. Need low height due to grow cabinet height limitations.
Tried to germ 4 seeds so far. Not all at once. 3 have germinated, 1 seed has not (7+ days). The seeds took over 48 hrs to germinate.

The papertowel has worked best so far for me; tried the water in a coffee cup covered to no avail. Planted the three germinated seeds. Each had diff length root tails. The longest about 3/8". OC soil baked and water PHed. 75% soil 25% perlite. Temp around 76. Light 18/6 PL55 biax. Fans in box and inline to outside vent. Going on 72 hours and no sprout popping up. Seed is buried approx 1/4",in small cup, soil wet at seeding and misted after. Saran wrap loosely over top.

The seeds are not sprouting/growing. Too impatient? Bad seeds? Old seeds? Seeds purchased from site sponsor. I am I missing something?

I am open to any advice on a low growing fem/auto seed that is easy to grow.
Thanks in advance for any ideas/help...

I am trying to be patient but it has been over one week and still no sprouting.
I have tried keeping the germinated planted seed covered with saran wrap to keep in moisture. Watered maybe every 3 days and misted every day with Ph/d water. 18/6 light schedule. Temps around mid 70's with lights on prob drops top 60's with light off.

Can anyone recommend a strain/seed that is fem/auto and lowgrowing. I purchased these seeds from a sponsor. My grow cab is a recycled kitchen cabinet so it is low.

It's not the seeds, it's you over tending it. Once it's germinated and in the moist soil, that's it. Leave it alone. No heat other than a decent ambient temp, obviously they aren't going to grow if they are cold but part of them sprouting is letting everything start to dry out a little. Moisture is good but it will kill them before they have a chance. Don't water again until after they are above the soil and even then take it easy, wait until the top of the pot starts to look a little dry.

Get whatever kind of seeds, germinate however you are going to do so, plant them in your medium and give them a little dampness and leave em alone. I know it's tough but it's the only way it's gonna work. I'd say give them 10 days maybe a little more, if they don't break the surface by then it's probably not gonna happen.

As far as the oc Jutes I really don't k ow too much about them but I would suggest starting them in something with no fertilizer in it like a jiffy plug/ coco plug or whatever. Basically anything that has no ferts in it, do pretty much how you stated and leave them alone till they break the surface. Even once they do break the surface, give them a little bit of light, even ambient or 1 6500k cfl is good 10-12 inches above the pot. Do not feed them anything until you see the second true set of leaves, dont count the shell of the seed that looks like a set of leaves.

The best advice I can give u is try not to rush the plant. It's going to let you know what she wants, so don't try and force water/nutes on it, definitely do not give it nutes dude. It will be the worst thing for it, possibly not recovering.

Don't rush dude. It's gonna happen you just gotta wait, absolutely nothing u can do about it.

So what happened to the other 3? Are they sprouted???

Post some pics of your setup, it will get u much better help.

Edit: also you can leave the light on 24/0 or 18 on 6 off. If you want faster growth go with 24/0. And as I said, no need to water again until they are sprouted, and even then just moisten the soil a little bit. No need for a full on watering yet.

be patient.
I had 3 sprouts i had given up for dead, looked like this at 10 days old 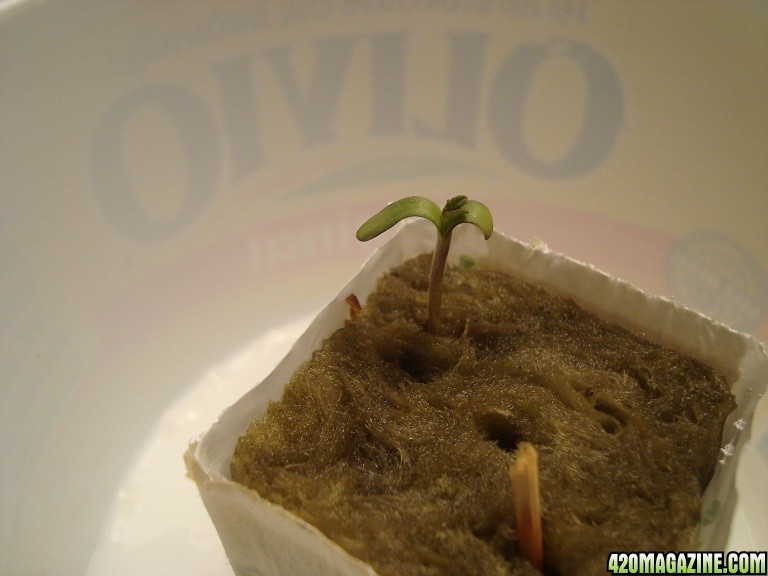 now they are 6 weeks old and thriving, 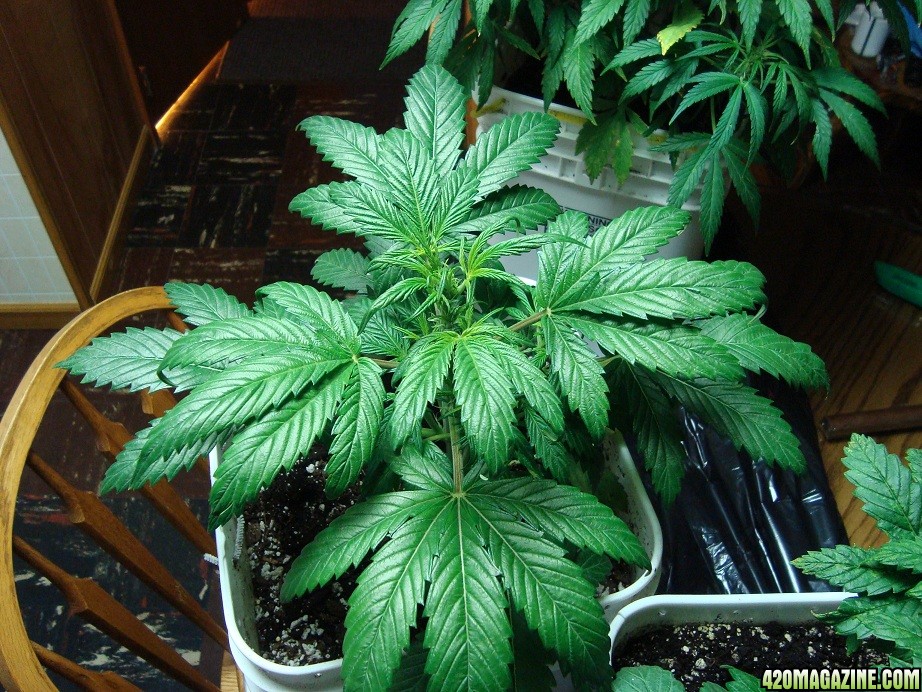 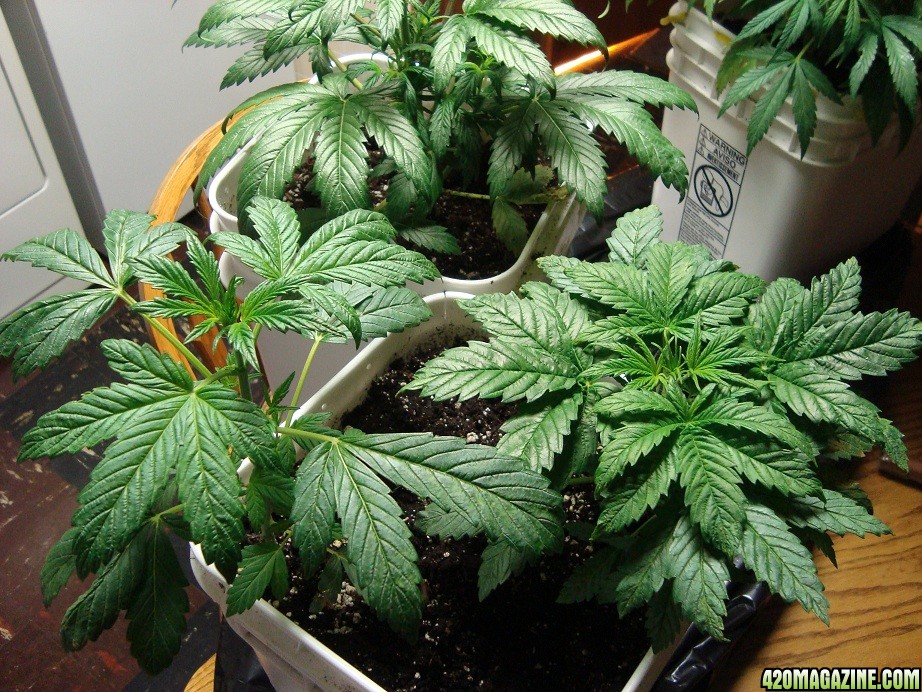 only problem they are under a foot tall and flowering. way behind the other plants only a week older. doing a 12/12 from seed experiment.
check my journal to see the others
Hash Hound's searching for his Puta Blanca
All this good weed, but it's still not hash.
USArmy Veteran 71-74 Kaiserslautern, Ger. 36th Eng/KARPAC, any my old army buds out there?
All text and pictures uploaded by this person is purely fictional and for entertainment purposes only.

@whitey: Word, man. I basically killed 7 out of 10 Super Silver Haze seeds within 5 days by impatience. It's only your own mistakes that you learn from.

I germinated them too short, fiddled around too much, overwatered, broke one stem and two tap roots by trying to help (I learned that the plants find their way to the light just fine, thank you). Leave the seeds alone, check ONCE every day, if in doubt - do nothing. Hard but the only way.
First LED grow: https://www.420magazine.com/forums/...s-soil-grow-medibud-super-silver-haze-ww.html
G

Thanks for all the input. I have one sprout in the soil now and have been leaving it alone. It is growing slow as heck. I germinated the seed, let the tail grow alittle over 1/4" then stuck in watered OF soil in a cup. Stuck the cup on top of my frie to keep warm and in low lite and it sprouted. Then I stuck the sprout under my lites but it has been SLOWWWWW growing. Finally saw a couple leaves after almost a week. I have not been over watering or overtending. The lites are on 18/6

-germinated in paper towel. approx 72 hrs for 1/4" root
-transplanted in small cup with holes in bottom to drain.
-soil 3/4 OF soil 1/4 perlite
-approx 1 full week after transplanted in cup did sprout appear

-after sprout appeared moved to grow cab
-been approx another week since moved to cab do I see sprout popping up fully with any kind of leaves.
-watering approx every 3rd day when feels dry and light weight
-absolutely no nutes added to water; water PHed and filtered
-18/6 light schedule with temps around mid 70's lite on, low 60's lite off
-fan in cab, fan on cab case sucking air out and fan in line blowing outside
-Biax t5 lites both grow and veg lites

?one question? could the OF soil be to strong nute wise for my sprouts?
?anything else I could be missing?

I am trying to be more patient. Could the slow growth be due to old/not fresh seeds? My seeds are snowryder from a site sponsor.

Thank once again for all your help.

?anything I could be missing?

sounds like you have pretty well covered. how are they doing now? how close are the lights to the sprout(s). Hope all is well and good luck
We have 2 ears and 1 mouth, listen twice and speak once...

I have voted have you??? Member, Plant and Nug of Month!

I have gotten more growth in the past week. 2 sets leaves now. I put a small travel humidifier in my grow cab and I think that has really helped. My hygrometer was registering no humidity before. I live in the N.E. and my cab is in my basement. Watering approx every three days. Leaves look nice and green and are approx 1.25 across. Big improvement from last week.

Lights are a couple inches from plant. I have 3 t55 biax lights in my cab. Now I have 2 grow bulbs and one bloom. Can switch to 2 bloom when it starts to grow bigger. My cab is approx 18"wide by 26" deep by 34" tall. I used an old lower kitchen cabinet and added out the back for clearance for my lights

In cab cpu fan for air circ/make plants dance, cpu fan built into back of cab to suck air thru lite trap and venting outside with inline fan to help suck/push air outside.

Here is what the Vanilla Kush looks like now compared to the pic i posted a few weeks ago. Shes packed inside with bud. I didn't measure, but she is like 18-20 inches my guess. Not bad for such a slow start.. My friend wasn't patient and we pitched two other VK that looked just as bad from sprout. Patients, patients, patients. 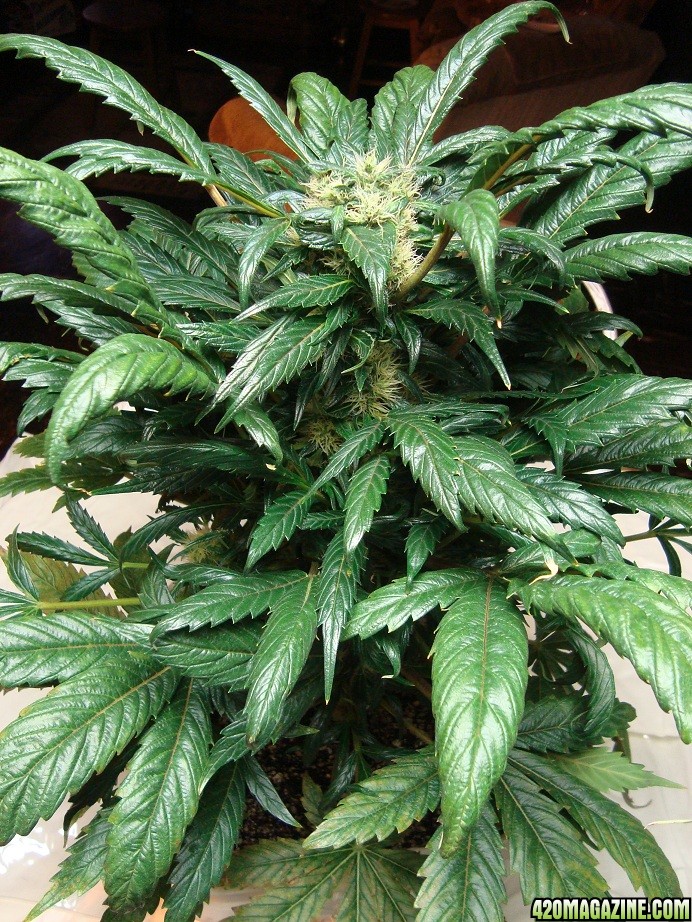 Hash Hound's searching for his Puta Blanca
All this good weed, but it's still not hash.
USArmy Veteran 71-74 Kaiserslautern, Ger. 36th Eng/KARPAC, any my old army buds out there?
All text and pictures uploaded by this person is purely fictional and for entertainment purposes only.
G

If mine end up like that I'll flip out. I hate to use this word but they look awesome. I am being more patient. This is my first grow. Still a learning experience.