The Oregon Medical Cannabis Awards (OMCA) will be held on Saturday, December 15, 2012 at the World Famous Cannabis Cafe. From noon until 5:00 pm, event-goers will enjoy a variety of vendors, seminars and speakers. OMCA is open to the public.

A highlight of the day will be the sustainable Fashion Show which features clothing made of hemp and bamboo. The one-of-a-kind bazaar provides an opportunity to support local small businesses and find the most unique holiday gifts that Portland offers.

Winners will be announced at the awards banquet which begins at 6:30 pm. Todd Armstrong, a local comedian who is gaining national acclaim will be the Master of Ceremonies, and it all takes place at 322 SE 82nd Ave, Portland, OR 97216.

Delicious dining will be provided by Headwaters CafÃ©. Tickets for the banquet are available at the cafÃ©.

In a blind taste test, judges are given twenty-eight samples of Oregon's finest medical cannabis to sample and judge in the privacy of their own homes. They score each strain on appearance, aroma, taste, smoothness, potency and medicinal effect. Judging is open to registered Oregon Medical Marijuana patients only.

Madeline Martinez, owner of the World Famous Cannabis Cafe and hostess of the event remembers, "When we first started the OMCA in 2002, this was the only access to medicine that some patients had for the whole year. We have come a long way since then."

Now in its eleventh year, the OMCA started as a way to document the effects of various strains. No research was being done to help patients learn which strains worked best for their conditions. So, Oregon NORML took on the task which was passed on to the World Famous Cannabis Cafe in 2010 when NORML changed their chapter guidelines.

Once again, Green Leaf Labs will test all the entries and provide their results at the event. Strain testing provides even more valuable information for patients.

The OMCA also recognizes heroes within the Oregon cannabis community. This year, the Dr. Rick Bayer Award goes to Paul Stanford for his valiant efforts at legalization.

As a special treat, Jay Mack and Big Dub will perform new songs from their upcoming release, Still Medicated. Jay Mack was inducted into the Oregon Music Hall of Fame this year for his work with Portland hip-hop pioneers, the U-Krew. Jay Mack and Big Dub have been long-times supporters of the OMCA and the World Famous Cannabis CafÃ©. They wrote a song about the cafÃ© for their first album, and have promised a surprise or two with their performance. 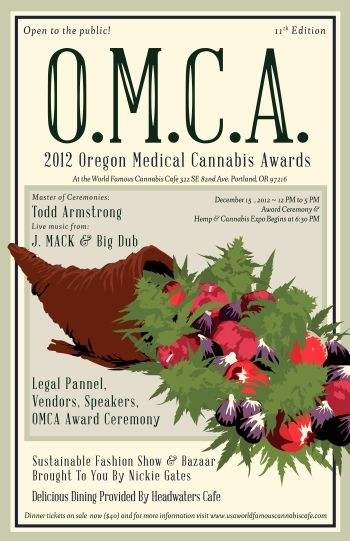