Hey I'm a beginner. Just thought I'd sign up and post a little bit of how things go. This is my second grow attempt with Arjan's haze #3 feminized seeds. 250watt cfl. I started my first attempt on the 15th of March. I used cheap soil, didn't have the right PH levels (didn't even bother checking) and it ended up having nutrient deficiencies and looked in pretty ugly shape. But was still growing pretty fast. Anyway my cat got into my room eat some of the leaves then sat on top of the plant haha. Totally killed it.

I tried again and had a germinated seed about a week later. This time I'm using Plagron batmix soil. Have a PH meter and PH up & down for water etc. I was pretty dissapointed as the soil seemed to be at about 7.5+PH when it said it should be around 5.6-6.2 when I bought it. I added epson salt to the soil but I think I may have put WAY too much in lol. I watered the soil thoroughly and It's remained wet ever since I did. I've only watered once or twice on top of that and that was to bring the ph down from the 7+ levels back to around 6. But it seems to keep wanting to go back to around 7. It's on about 7 now I think but I'm hesitant to water it again as I know the soil must be pretty wet. The plant isn't in perfect health as far as I can tell;

brown rusting tips on a few lower leaves
light yellow coloring on some of the top parts of some the lower leaves
pretty much all leaves are not flat, the serrated edges are curling up 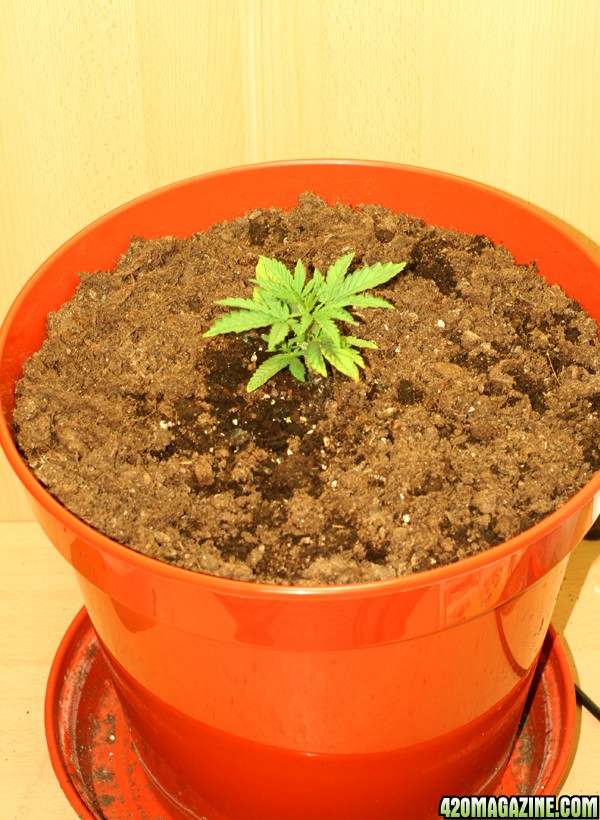 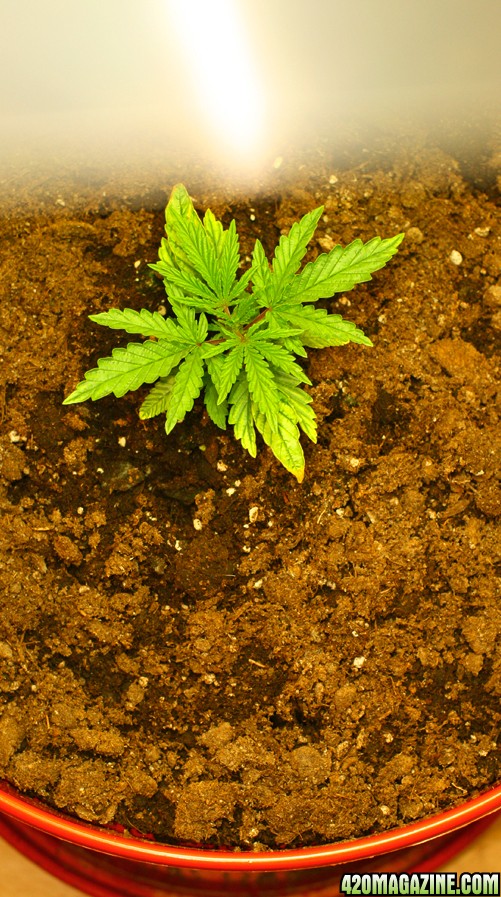 And these are pics 6 days later on the 23rd: 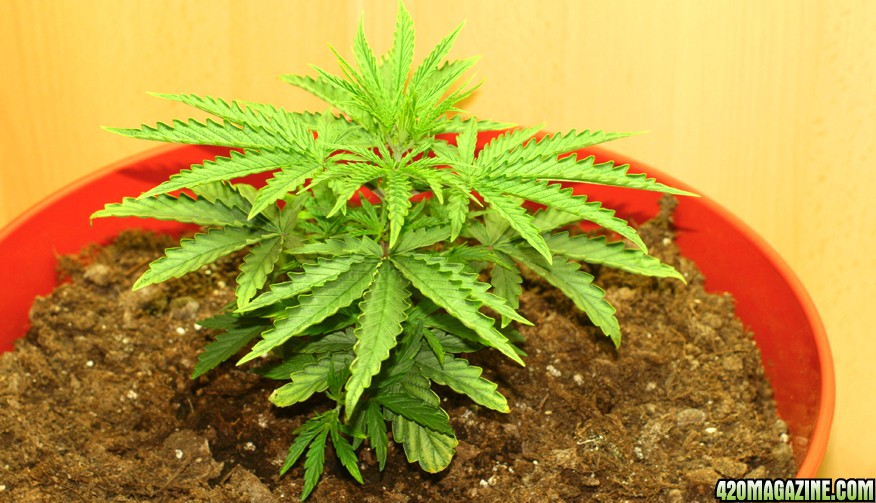 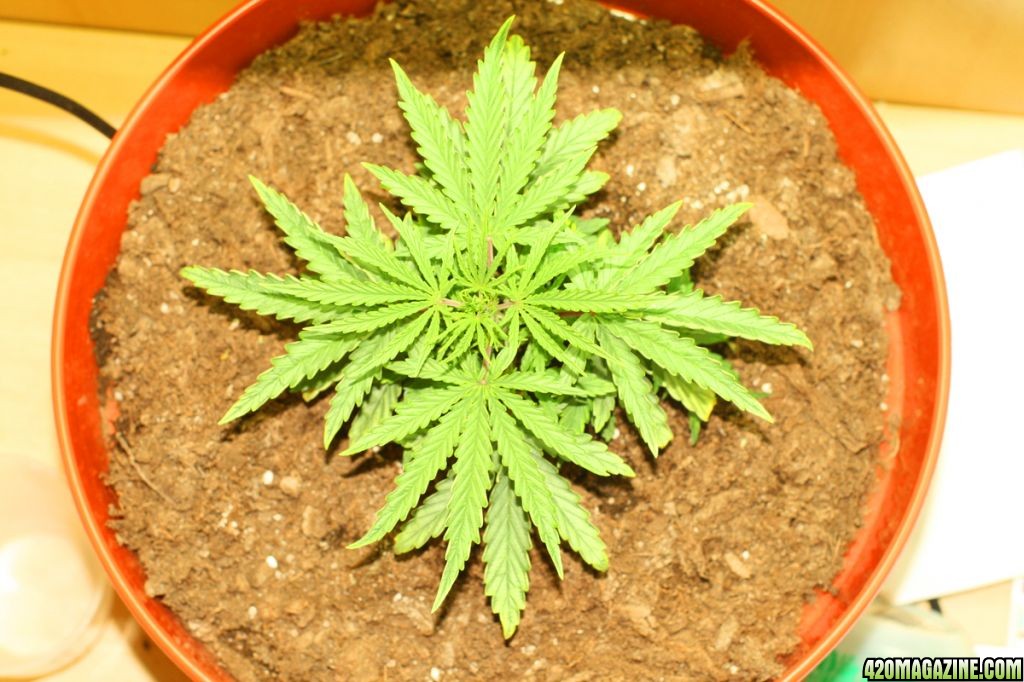 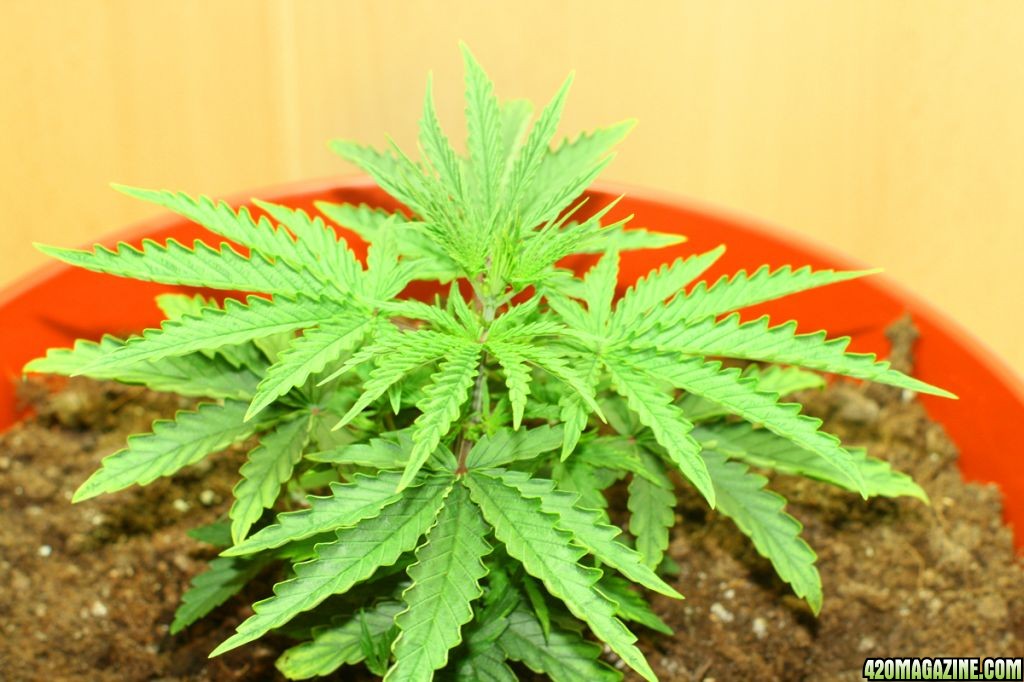 The color of the pics isn't very accurate due to my camera color settings but yea. I'll need to get the PH more towards 6 soon I guess. Not sure when I'll start flowering, I'll wait a bit I think. I'd say it's about 6-8 inches tall. I think that's all. Any tips or info please share

Just the very top inch or so is dry. Below that it's thoroughly wet. Too wet it seems. I think that's why my leaves are curling like that.

It's my first time growing so I'm not familiar with how most plants should look but I am impressed with how compact the plant seems. it's only about 7 inches tall but it has branches growing off everywhere. The pics don't do justice to how bushy it looks like it will become

your leaves are curling like that becuz of the heat, the temp is too high or the lamp is too close to the top, they will stop do that when they cool down abit.
WR Indoor Grow Journal - WhiteDwarf/Roadrunner

this could be very nice. good luck , hope you'll finish this time.

Definitely watch your heat. What's the temp in there? If you can, I would raise up the lights on em. ;-) Great job so far!
Just For Fun Bagseed Grow
Hydro Grow: California Orange Bud

When your plants are deficient in phosphorus, this can overall reduce the size of your plants. Not enough causes slow growth and causes the plant to become weak, to little amount of Phosphorus causes slow growths in leaves that may or may not drop off. The edges all around the leaves or half of the leaves can be brownish and work its way inwards a bit causing the part of the leaves to curl up in the air a bit. Fan leaves will show dark greenish/purplish and yellowish tones along with a dullish blue colour to them. Sometimes the stems can be red, along with red petioles that can happen when having a Phosphorus deficiency. This isn’t a sure sure sign of you having one though, but can be a sign. Some strains just show the red petioles and stems from its genes.
So pretty much the overall dark green colour with a purple, red, or blue tint to the fan leaves is a good sign of a Phosphorus deficiency. Having Cold weather (below 50F/10C) can make phosphorous absorption very troublesome for plants. (copied and pasted from the "pest & problems post)


Looks like a possible phos. deficiency to me...you seem to have some of the symtoms...upturned leaves and red stalk. Just treated my plants for exactly the same problem, but I would consult grow support for a more exact diagnosis.
R

i must say that it is a pretty plant tho, looks highlighted or something. hope you get it sorted out soon! good luck
._- In Progress Journals-_.
RC Grows White Widow with CFLs!

Thanks guys, I took the lights up a little bit higher, I don't have a way of recording the temp so i dunno what it is, the temp of the closet is basically room temp though as I have the doors open mostly. Regarding phosphorus I dunno. these are pics from the greenhouse seeds own site and it has red stems there 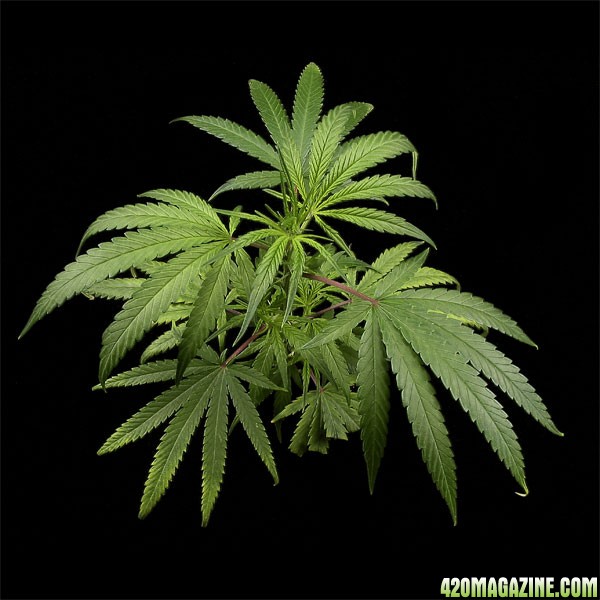 I think most likely i have multiple nutrient deficiencies due to PH probably. I watered it yesterday with about 1.25 liters of water at 5 PH and added a bit of fert. the lower leaves still have the brown tips that dry up, but it does seem to just mostly stay on the tips, no leaves have died or anything. the brown tips seem to work their way up but meh I think I'll just try to leave it alone

pics from today. I dunno what day I'm on. I'm sure I started the germination process on the 1st of April. So including the couple of days it took the seed to germinate I'm on day 26, from planting the seed it's probably day 23 of veg. next to a 1.25ltr cola bottle for size comparison 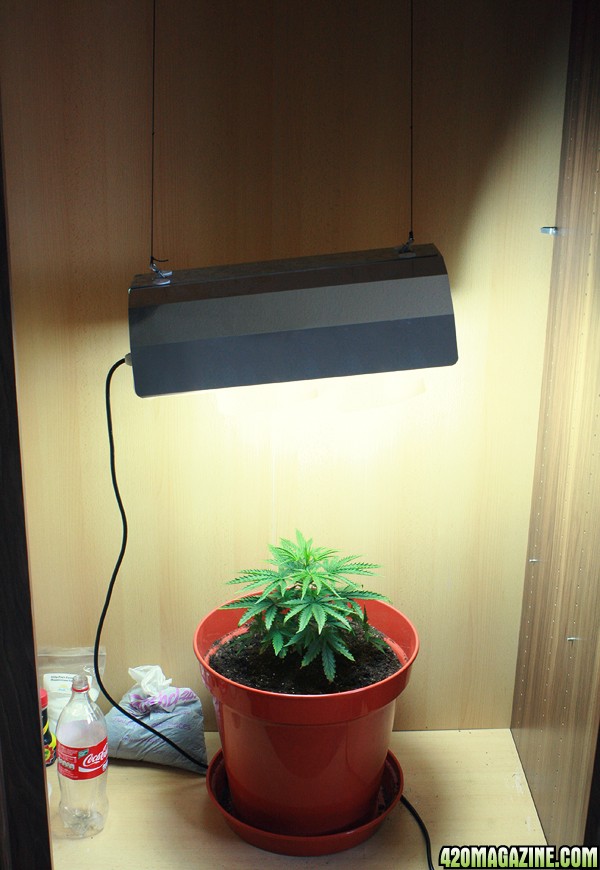 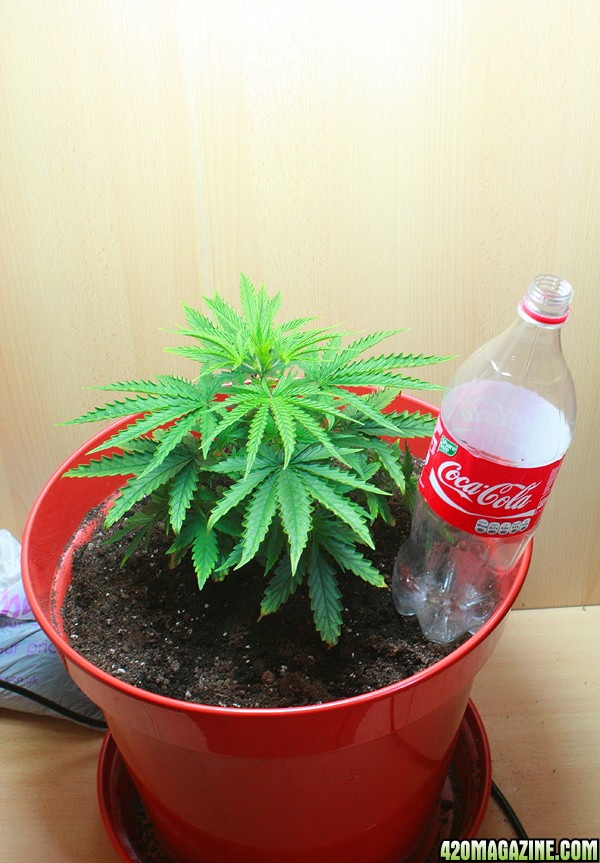 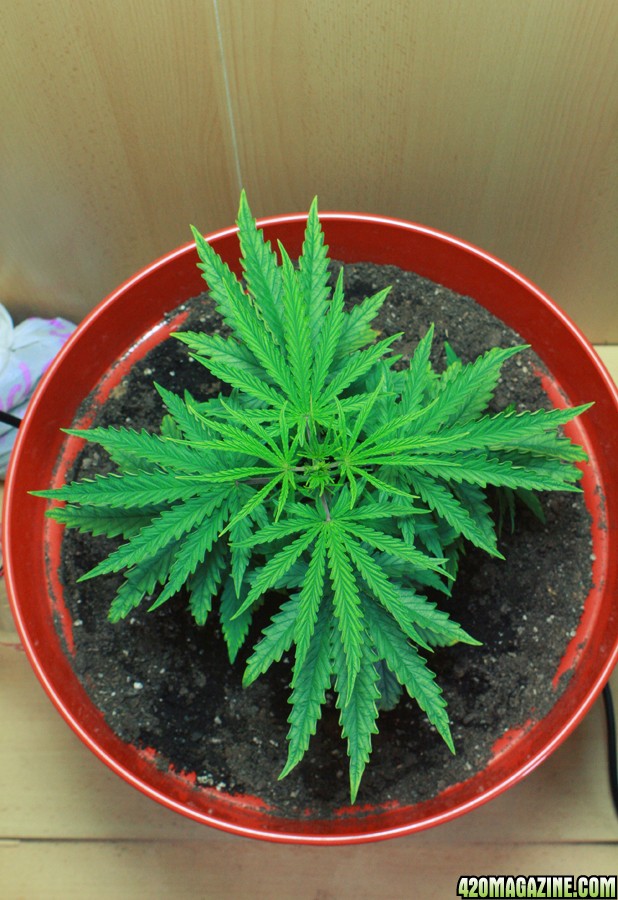 Any opinions when to flower? It's apparently the shortest Sativa or one of the shortest so I was thinking I should leave it to veg a bit longer? It has about 8 nodes atm, not alternating I believe. About 24cm tall

yea thanks dude haha. I just got back from work and came to check on the plant and it appears to be flowering/pre flowering on the very top of the plants growth. Day 25(ish) of veg. 24hr lights, 250 watt 5400k cfl. I took a pic of it, what is this called? 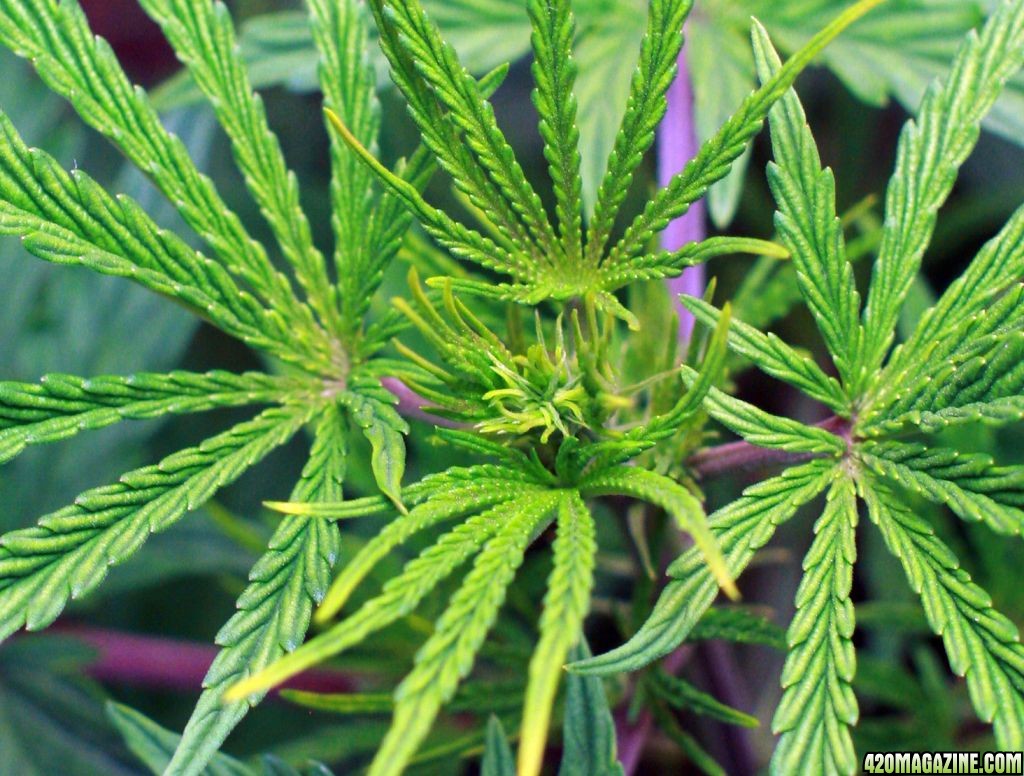 So yes, I just turned the lights off and I'll leave them off for 12 hours then put them in the 12/12 flowering schedule with the 2700k bulb in the morning

Those are leaves and not white hairs you see Andy.. Look close and watch them grow out as leaves... It is looking good...
420 Magazine®
Creating Cannabis Awareness Since 1993

I agree looking good! I also see alot of people assuming the lil pods are males but sometimes they are sometimes they are just new leafs or hairs come out of them!
L8tnightskunk's First Grow Journal
L8tnightskunk's Second Grow Journal - Ready to Go
Please Visit Our Sponsors
Please Help Support Our Mission
Forum Guidelines - Please Read Before Posting
420 Photo Gallery Tutorial - How to Post Photos
How to Grow Marijuana

ohhhh ok guys cool. Well I think I have to flower now anyway haha, when I took the bulb out I dropped it and it smashed which totally sucks and now I'm only left with my 2700k one >: (

this growth of the leaves looks different from before, with all those little things that will grow into leaves, is this the point when the nodes will start alternating?

whats up man...I want to do a ARJAN GROW...THEY LOOK REALLY SHARP....those little leaves will look like alian fingers for a day or 2 then they will start to look like leaves...mine did the same thing and i was wandering to......great job so far...Ill be watching.............PEACE
Happiehippie's First Time Purps Hydro Bedroom Grow
Please Visit our Sponsors
Please Help Support Our Mission
Forum Guidelines - Please Read Before Posting
420 Photo Gallery Tutorial - How to Post Photos
How to Grow Marijuana

AndyLT said:
ohhhh ok guys cool. Well I think I have to flower now anyway haha, when I took the bulb out I dropped it and it smashed which totally sucks and now I'm only left with my 2700k one >: (
Click to expand...

You can veg with the 2700K bulb although you will end up with a stretchier plant. But if you want/neet it to get bigger before you switch to flowering (it'll definitely get taller lol)...

And you could pick up a bunch of 6500K CFLs - either to be the only veg lighting until you can replace the MH or as a supplement to the unbroken bulb (be careful with it).
Respectfully,
Tortured Soul