I've been having some thoughts on my growroom, I hope you can give me a response to this:

The deal is, I have three growrooms, where two of them are for bloom fase. The first room is app. 9 sqm, (98 square feet) and the second room is about half of it. Now, both room have adequate air intake and output, but I was wondering whether or not I could gain anything from making connections between the two rooms with inline fans ?

The idea was to have to have two holes so that I could pump air from room 1 to 2 and from 2 to 1. Then I wanted to adjust the lighting schedule so that the two rooms were opposite each other.

My thought was that ( very simplified ) the plants uptake CO2 during the 'day' and produces O2, and at night it is reversed. The plants could then use what the other room was producing. Another thing is air temperature: Right now I heat both rooms during 'the night' because of cold weather outside. Exchanging air between the rooms could keep my temperature at a more stable interval.

CO2 is heavier than O2 so, I was thinking of installing flextubes; sucking air from the bottom of both rooms and blowing it out in the top of the opposite room. I would still be using the regular airsystem that I already have in place, so that both rooms will get fresh air, this other airexchange would just be something extra.

Any thoughts on this method? Would be very much appreciated

(I have never heard about anyone who've done this)

few things that need to be known to help u out.are the lights in both rooms on at same time.and what equipment do you have to work with extraction fans etc.i will give you a basic run down of how I do this.first off I have a room that is 25x30.in that room I built another big room that is 20x25,leaving a hallway around the entire room.this helps with ambient air temps a lot. the 20x25 room is sectioned off into two 10x10 flower rooms and one 5x10 veg room,and a 10 x 14 lung room.all those are rough measurements but you kinda get where I am comin from.now the lung room as i call it has a 2 1/2 ton window unit ac and all the extraction and intake fans for all three rooms.i take the hot air from the rooms and blow it over the intake of the ac.the intake for each room is as low as possible.i run the intake and exhaust 24 7.there is a 70 pint dehumidifier in one flower room only (the daytime room).the lights are all air cooled with a 8 inch extraction fan per 3000 watts.i run flip boxes for the flower rooms,so in one room the lights are on for 12 hrs then the flipbox flips over to the second room .all the extracted air from lights is dumped and circulated around that hallway that is out side the rooms helping to keep night and day temps reasonable.right now the outside temp is 6 degrees fahrenheit,inside the hallway it is 80 degrees fahrenheit.and 76 in the flower room.this control of the ambient temp surrounding the grow area is absolutely one of the best things I have found out during my experiences trying to create a better grow enviroment.during summer months I take the extracted heat from the lights and pump it to the outside.i also keep most of my ballst in that hallway so the heat isn't in grow area.i will try to put up a few pics to give a better idea of what I am trying to say as I know I am rambling but would like to really help.
"The illegality of cannabis is outrageous,an impediment to full utilization of a drug which helps produce the serenity and insight,sensitivity and fellowship so desperately needed in this increasingly mad and dangerous world."
-carl sagan,astrophysicist 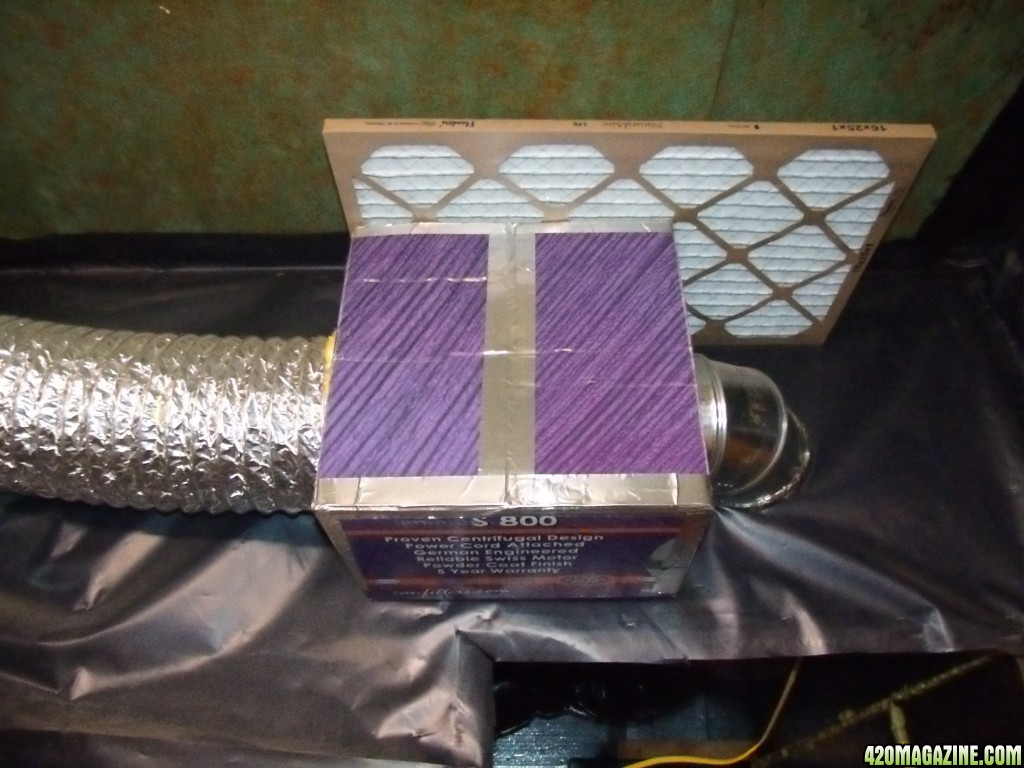 this is a air intake for the lights built from the box the fan came in,it has a simple square hole cut out on the top,i use regular house airfilters to keep the hoods and fixtures clean as well as to clean the air outside the grow area. 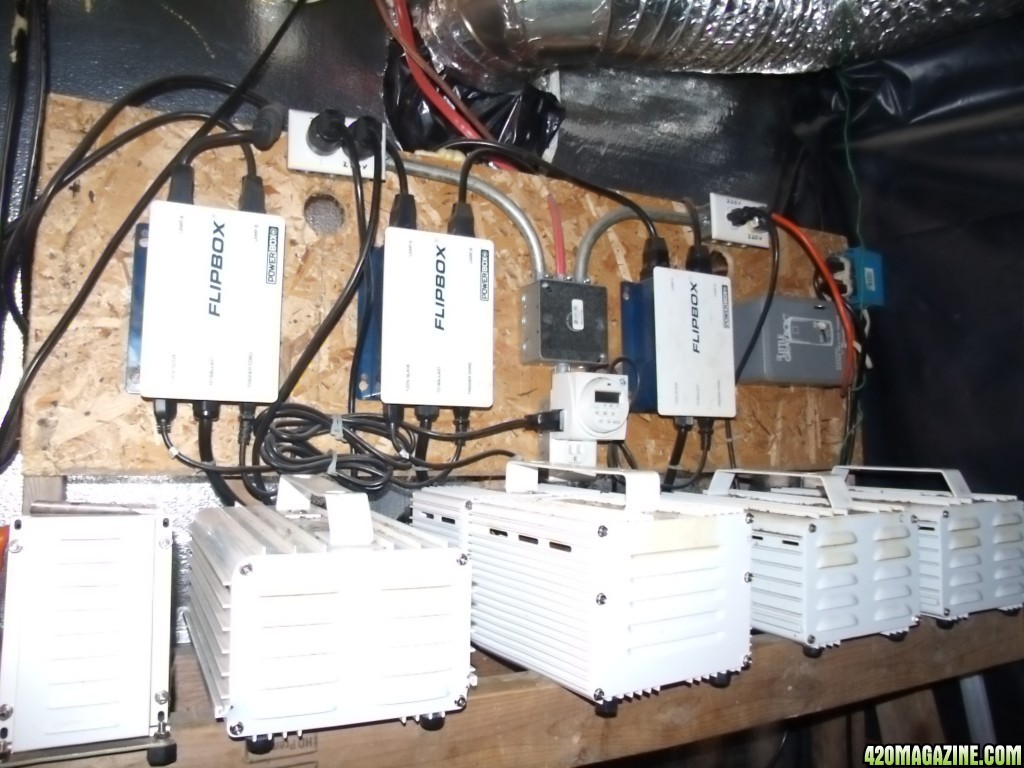 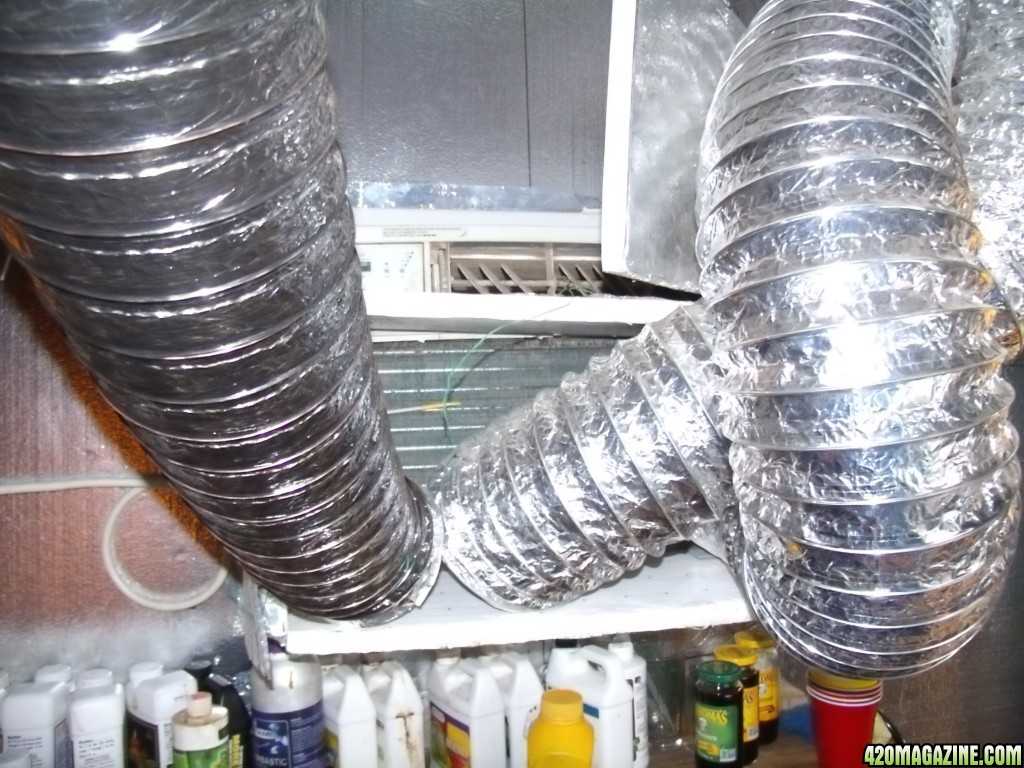 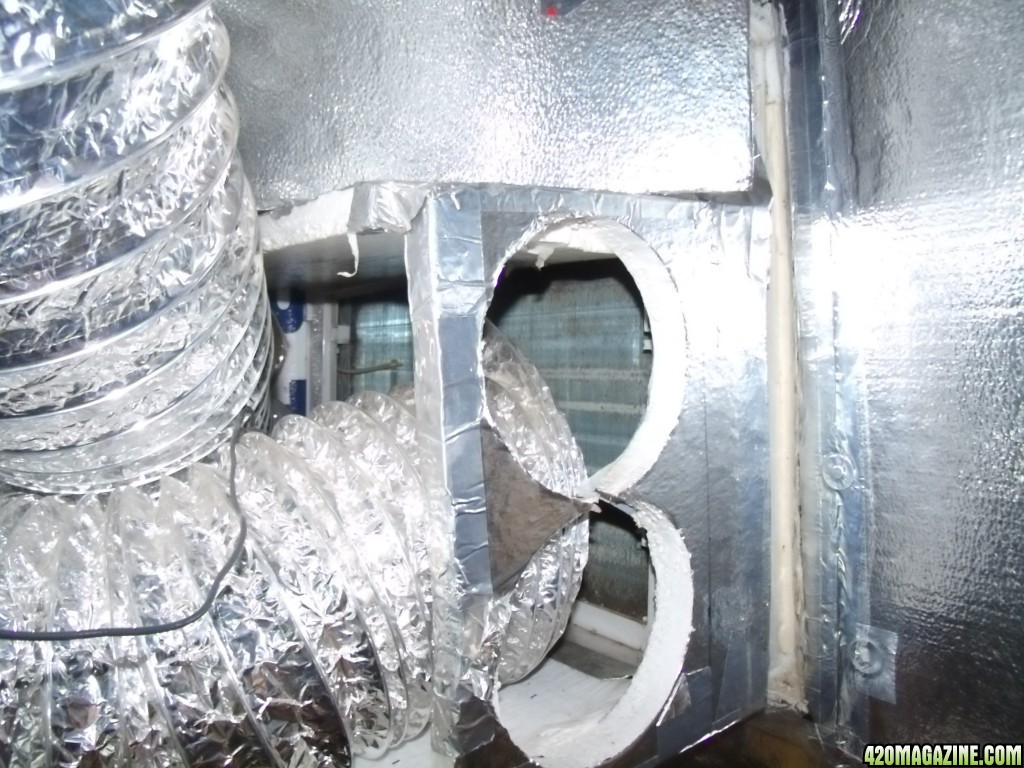 same thing as above different view 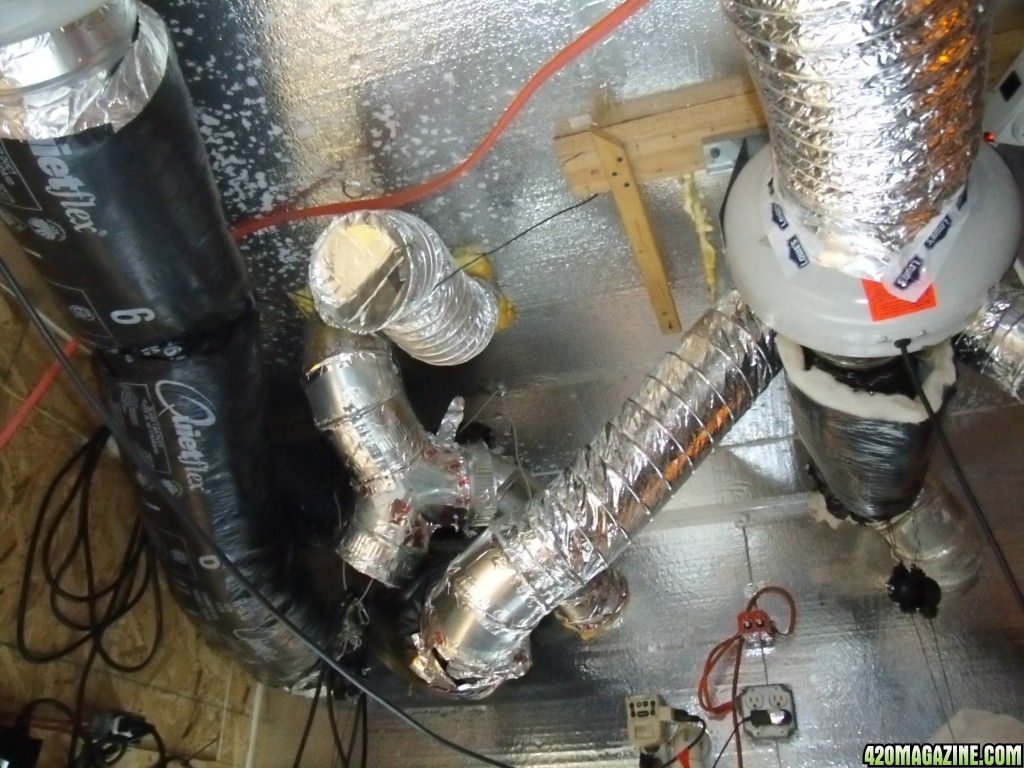 some of the extraction fans and stuff,inbetween the two fans you can see the connections I hookup my lights to during summer to get it out of the building. 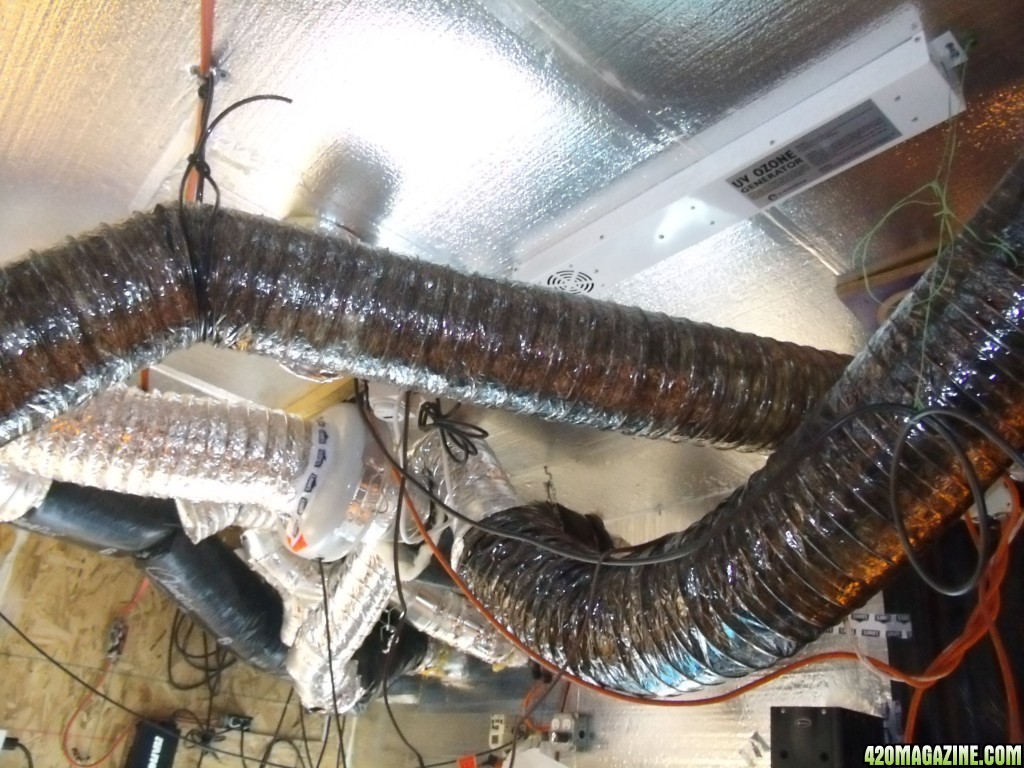 different view of above.showing a ozone generator which only runs for 30 min a night when I am not in there-this is one of the things that imo helps to keep unwanted shit out of the grow area,but can be very bad for humans and plants if used incorrectly.

I can take more pics and give more info if needed,good luck with your endeavors
"The illegality of cannabis is outrageous,an impediment to full utilization of a drug which helps produce the serenity and insight,sensitivity and fellowship so desperately needed in this increasingly mad and dangerous world."
-carl sagan,astrophysicist

This is something I have also considered greenteawitch, the idea of having two rooms in flower and both alternating back to back whilst extracting 02/C02 from the room with the opposite lighting cycle. Did you ever go ahead with this or receive any useful information?
You must log in or register to reply here.
Share:
Facebook Twitter Reddit Pinterest Tumblr WhatsApp Email Link
Top Bottom