California - Tulare County officials reported making 21 arrests and confiscating 52,000 pounds of marijuana, along with 33 guns, during raids on 26 suspected illegal marijuana-growing operations in the Terra Bella area. Members of the department and U.S. Justice Department investigators with search warrants began the series of raids in the early hours of Thursday morning. Most of the sites were identified by sheriff's detectives flying over the area in July, and three of were located during the series of raids. "Three teams were given a set of locations and arrived early in the morning. Upon arrival each team cleared any structures on the premises as well as marijuana groves to ensure the property was secure," according to a sheriff's report.

Afterward, investigators looked into whether the sites were legally growing medical marijuana or if they were illegal operations. Sheriff's corrections deputies also took part in the raids. Authorities eradicated 4,213 marijuana plants, and seized 81 pounds of processed marijuana, and the county Resource Management Agency provided staff and heavy equipment to uproot, load and transport the plants. Names of the people arrested weren't disclosed by sheriff's official on Friday or whether the growing operations may be connected. The Sheriff's Department has scheduled a press conference on Monday afternoon to discuss the raids. 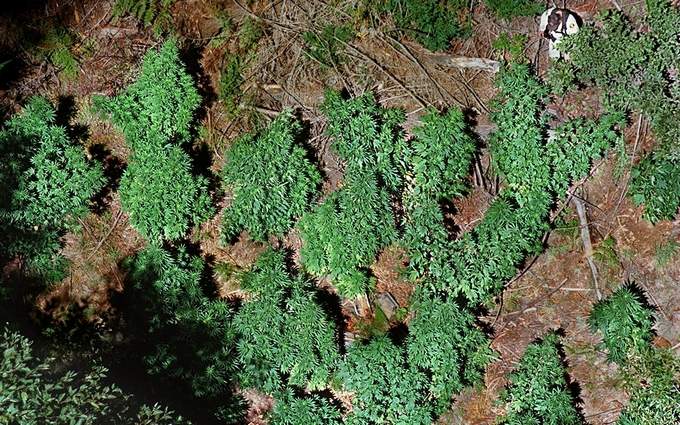 Funny how they spotted it in July and didn't do the raid until late August. Do they purposefully wait until it's too late in the season to replant?
P

I'm guessing flowering plants have a lot more weight so it looks better when they brag about how much they pulled.

I can understand how they waited wanting to catch the growers.
I can't understand why they didn't wait until harvest.
The odds of catching the growers would increase.
The quality of take home bud would be higher for officers involved in the raid.
Radogast

4100+ plants growing outdoors, seriously?? and probably on public land. Along with guns nothing gets the cops wound up more than tons of pot AND guns. What was the expectation there?
Cottage 420's Organic Perpetual

Dugan said:
Funny how they spotted it in July and didn't do the raid until late August. Do they purposefully wait until it's too late in the season to replant?
Click to expand...

flowering plants you have the possibility of catching people at the site compared to during veg when u may catch the water(er).. also as mentioned above the plants have a value at that point and they weight the wet weight and call it street value. many reasons go into it im sure