This AM I noticed some brown edges on the Ice. Does anyone have any suggestions? I would like to take care of this ASAP so it doesn't get worse/ 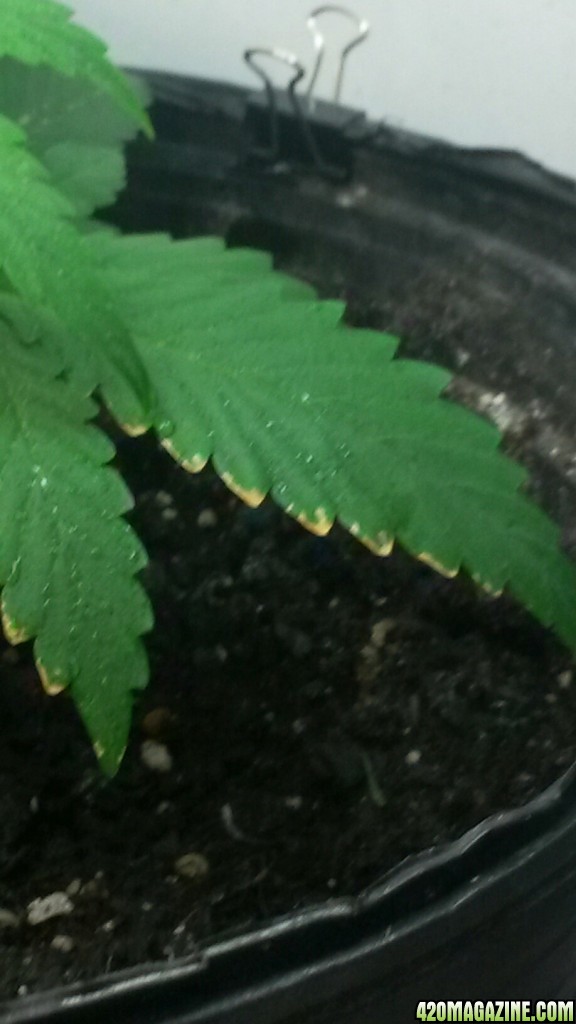 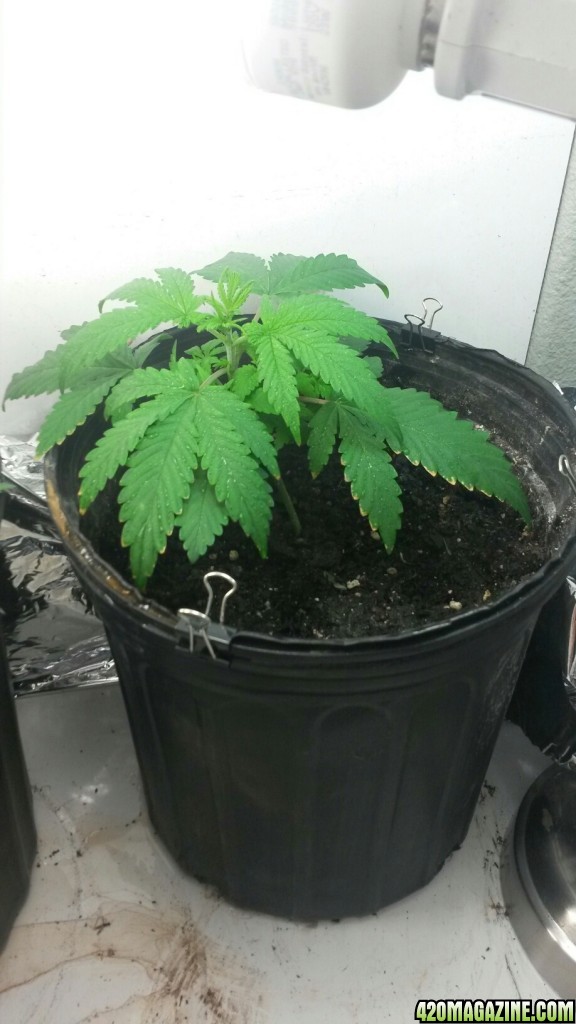 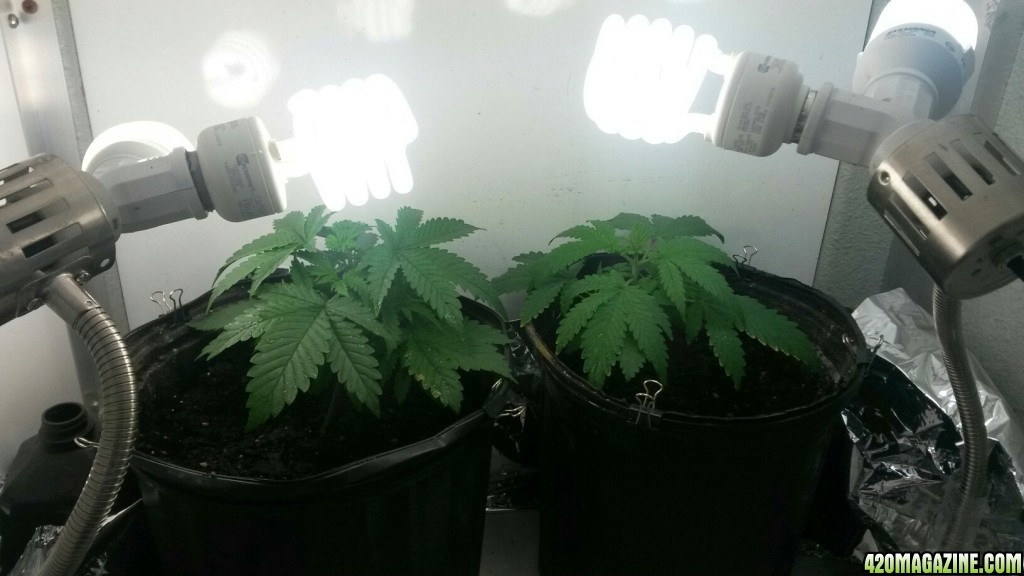 Looks to me like the beginning of some sort of nute-burn.

if you still have the bag from the soil, read it... I believe all MG soil (even their "organic" one) has nutes already in the mix in a time-release form. The bag will probably say something like "Feeds for up to 4 months" or something like that. most people consider MG too "hot" of a soil to use, partly because it being time-release, there's no way to control the nutes. if you get nute-burn, as far as I know you just have to ride it out and hope for the best. adding the Fox Farm (at this stage, I'm assuming Grow Big) is just adding fuel to that fire of "hot" soil. FF is an instant nute, so if you had a soil with no nutes to begin with and started to notice burn, you just stop adding (or reduce dosage) your nutes and give it a flush with plain water. There's really no way (that I'm aware of) to do that with a time-release formula soil.

What I would suggest at this point is stop using the FF and just use plain water and see if the condition improves.

My first journal from the garage - Nirvana Northern Lights - soil/CFL

I Flushed all plants thoroughly and everything has been good. Have not given anything except h2o. PH of soil is 6.5. This afternoon my flowering Jock Horror and AK48 are showing yellow leaves on the bottom. What should I do? Is it time to start feeding in small amounts?

Here is a pic. 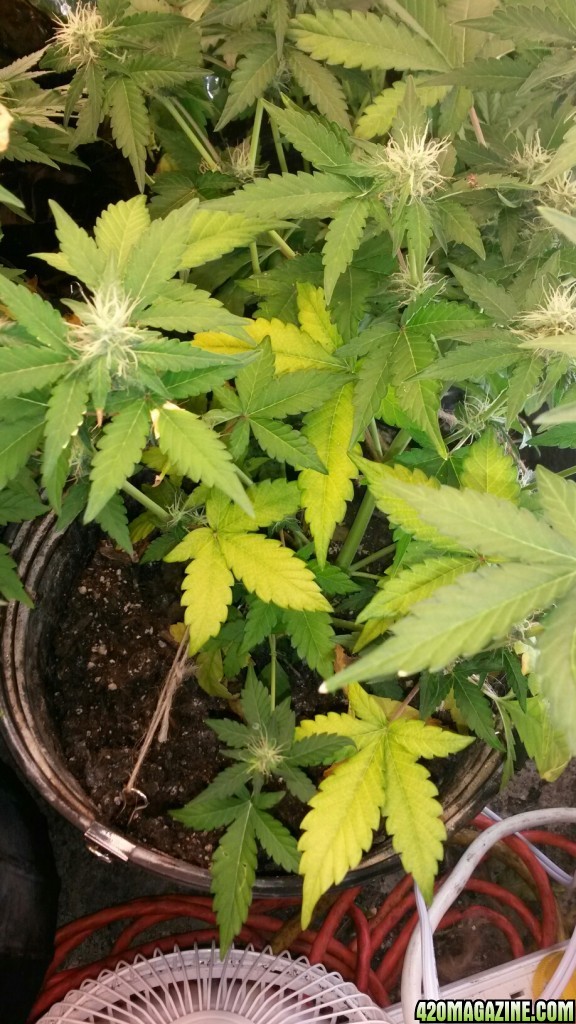 If your PH is good, then yes, nutes time. You haven't fed nutes up until now?

And it looks like it's just a Nitrogen deficiency.
420 Contests
Everything You Need To Grow Cannabis
Forum How-To Guides For Beginners

No. Nothing yet. I have fox farms nutes. Grow big, big bloom, and tiger bloom.

You really should try to avoid using MG soil as much as possible. It's 'time-released' nutes can cause lots of problems. I think it is time to start feeding your plants as Antics said. Start them on a 25% dosage as see how it goes?

I started this am with 1tsp big bloom and 1 tsp tiger bloom in 1 gallon of water. We will see how the look over the next few days. Should I see the yellow leaves turning back to green? how long should it take?

I have never had leaves that were yellow from a Nitrogen deficiency go green again.

I would leave them on the plant until the fall off on their own, so the plant can use as much as possible from them.
420 Contests
Everything You Need To Grow Cannabis
Forum How-To Guides For Beginners

Can i get an update on what happend?

drpuff said:
Can i get an update on what happend?
Click to expand...


The plants turned out ok. Ended with about 16 or 17g per plant. I have since switched my lights to Mars-Hydro LEDs.