Custom and Border Protection agents have located and seized nearly two tons of marijuana hidden in a shipment of lettuce.

CBP said in a release that the seizure happened at the Colombia-Solidarity International Bridge on June 26, when an officer referred a tractor-trailer hauling lettuce for secondary inspection. After "a canine, non-intrusive and physical inspection" of the trailer, CBP said agents found and seized 5,754 packages containing a total of 3,707 pounds of marijuana. The marijuana had an estimated street value around $741,000.

"This is truly an example of our CBP officers' hard work, experience and dedication to the CBP mission," said Port Director Gregory Alvarez, Laredo Port of Entry in a prepared statement. "I congratulate the officers in advancing the CBP mission and protecting the public from illegal narcotics."

CBP added the case has been turned over to U.S. Immigration and Customs Enforcement-Homeland Security Investigations (ICE-HSI) for further investigation. CBP did not state in their release if anyone was arrested. 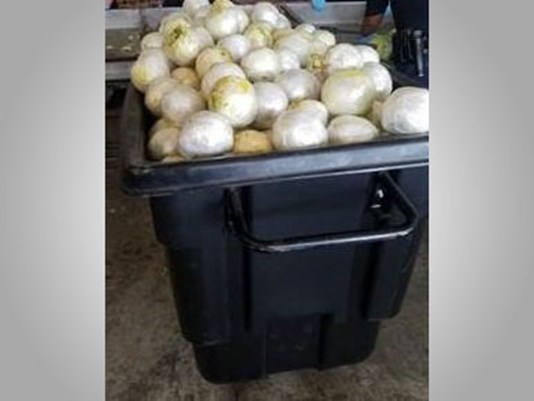 Why is ditch weed still being smuggled into the states? With all the states that are medically legal, I KNOW not many people waste funds on that garbage anymore. If anyone wants that they might as well go to mississippi. They are full of it, haha!
It really does shock me. Especially as it's very bad for you. I don't see the need especially when legal states have such high surplus. Though of corse until the careless, thoughtless, out of touch with reality, unpatriotic, selfish fucks in office finally admit the bullshit and lies they have said regarding cannabis is just that. There is no reason besides blatant stupidity and carelesness toward reason, our health and wellbeing, is Mexican ditch being brought here. I am glad that was seized as that's only a small haul for a border shipment, but I'm glad less shit will be around as despite it being cheap it's full of contaminants and mold and other things. Stay away from brick weed. It's cheap, shitty & dangerous to your health. Of course it also has beans in It so depending u can grow some not so bad plants. Looking on the flip side .

WeedNerd420 said:
Why is ditch weed still being smuggled into the states?
Click to expand...


Because people buy the stuff, of course. It's the same as any other business, lol, if the product wasn't selling, it wouldn't be shipping. BtW, they estimated the "street value" at approximately $199.89/pound. I... might consider buying a pound of MexiBrick for $200 (I would almost certainly do so if I had some way to pay the $200 directly to the poor schmuck whose labor actually grew it). I once grew some Oaxacan highlands sativa, and it was among the top three or four strains I've had - if someone could find, IDK, ten or twenty viable Oaxacan seeds in that pound, it'd surely be worth more than the price of admission, lol. And, if memory serves, that's about how many GOOD seeds one could expect to find in a pound of 'brick (among the thousands of crushed ones :rolleyes3 ). The picked-through crap that was left on the table after the seed search would be able to produce at least a few grams of hash oil, methinks.

Unfortunately, if someone bought a pound of this crap for $200, probably $197.50 would go to the cartel, with the grower getting the $2.50 (if he was lucky). Also unfortunate... I've read that many of the growers in our "51th state in spirit" (we give Mexico $320,000,000 in aid per year, lol, and that's just the part that there's an obvious paper trail on, probably be cheaper to just annex the country, put half of them to work in fast food & mindless retail jobs, and put the other half on welfare... just like our current 50 states). Anyway... I've read that a substantial portion of the Mexican growers have, due to "United States customer demand," started growing cannabis strains from seedbanks - instead of the cannabis that became naturalized to the area over generations (some of which was quite wonderful, indeed). So... that hunt for a few usable seeds could end up producing some off-the-shelf skunk strain or the like, instead of... the Kind.


WeedNerd420 said:
If anyone wants that they might as well go to mississippi. They are full of it, haha!
Click to expand...


They're sure full of something down in Mississippi. Accodring to NORML, if I went to MS and got caught with LESS than .1 gram of hash, they'd stick me in jail for a YEAR (in 1988, here, a cop just took it and let me watch him drop it into the nearest storm drain). Unless they caught me selling that serving of hash - I think that can still get you a 30 stretch. Sort of seems like Mexico is more sensible about cannabis than MS :rolleyes3 .


WeedNerd420 said:
It really does shock me. Especially as it's very bad for you.
Click to expand...


Well, it's not exactly healthy overall. I've heard that they don't put any more care into (large-scale) cannabis growing down there than they do with the food crops that we import from them. Well... I cannot honestly say that I've ever heard, seen, or read of someone getting an E. coli issue from consuming Mexican cannabis, LMFAO - so, perhaps, a bit more care than they put into growing our food. Still and all, definitely not boutique-quality (the Mexican-grown cannabis OR food).

On the other hand, probably the biggest health concern with Mexican cannabis is the trace remains of paraquat that we allowed our government to coerce the Mexican government to spray on the cannabis and the ground it was grown on for years. And not that I'd want to, but it seems only fair that WE be the ones that consume that sh!t, yes?

BtW, I know the quality of MexiBrick is abysmal 99.5% of the time and all. However, considering that the nutritional value of the number one type of "head" lettuce (no, not cannabis, lol, that'd be "head lettuce," not "head" lettuce

) consumed in this country is... well, it's so low that a rabbit would quickly starve to death on a diet of it... They should have confiscated all the lettuce and allowed the cannabis to pass on through.

BtW₂, when I first glanced at this article, I saw the name of the bridge and thought this stuff was coming from Columbia instead of Mexico. I was in the process of typing "Due to the fact that we provided a market for c*c**n* and, in the process of that - combined with the trashing we've given their country in the name of the "war on drugs," we are almost obligated to purchase Columbian cannabis wherever possible, lol. Ought to declare the entire country one giant cannabis dispensary and allow it to supply our country (with decent-quality cannabis) for the next 25 years or so. That wouldn't come anywhere near making up for the damage to their economy (and the significant loss of life) we as a nation and a people have caused Columbia, of course. But, as symbolic gestures go, this one would be somewhat appropriate - and it'd give them both an economic boost and a far healthier product to grow....

I'm just rambling. Still laughing about them grabbing the cannabis and allowing that lettuce through. That's... criminal.
Respectfully,
Tortured Soul