It's still a little too soon to declare Aurora Cannabis the best marijuana stock of 2017. Perhaps another stock will surge over the next few weeks and take the top spot. For now, though, Aurora Cannabis clearly stands above all the rest, with its stock soaring more than 250% year to date. Most of those gains have come in just the past month.

You might think that after such enormous gains in a short period of time, Aurora Cannabis stock could be poised to fall. I suspect just the opposite is more likely. Here are three reasons the hottest marijuana stock of the year (at least so far) will go even higher.

1. The floodgates are about to open

Canada took a major step toward the legalization of recreational use of marijuana on Nov. 21 with the release of Health Canada's proposed regulation process for the cannabis industry. Aurora Cannabis lauded the proposal -- and rightly so, because it would, in the words of the company's CEO, Terry Booth, "create an incredibly vibrant market."

Aurora reported revenue in its last quarter of CA$8.2 million. That translates to around CA$33 million annualized. But the company's revenue jumped 39% from the previous quarter -- not the prior-year quarter. Remember, that's just for medical cannabis use.

Canada's Parliamentary Budget Officer (PBO) estimates that the marijuana market in the country will be between CA$4.2 billion and CA$6.2 billion in 2018. The PBO also projects the market could grow to around $7 billion in the next four years. A more recent analysis suggests the market potential could be twice as big as previous estimates.

Let's be pessimistic and use the low end of the PBO's numbers. What market share would Aurora Cannabis need to get to multiply its current revenue by tenfold? Less than 8%. I suspect Aurora will be able to top that level. My hunch is that the actual market size will also be significantly greater than $4.2 billion per year. In other words, there's a good chance that the floodgates are about to open for Aurora Cannabis.

Aurora is getting ready for the coming flood. The company has kicked its business development strategy into high gear. The most visible evidence is Aurora's recent bid to acquire CanniMed Therapeutics. My view is that the deal will probably finalize, considering that Aurora is offering a 56.9% premium above CanniMed's closing price before the takeover announcement and already has commitments from shareholders owning 38% of CanniMed stock.

However, Aurora's focus isn't just on CanniMed. On Nov. 23, it announced the acquisition of H2 Biopharma, which is completing construction of a 48,000-square-foot cannabis production facility an hour away from Montreal. On the same day, the company also stated that it was buying Larssen, a leading designer of high-tech greenhouses. Aurora also invested in Hempco, which develops hemp foods and nutraceuticals. The company is also making strategic partnerships. An important one is Aurora's agreement with Radiant Technologies under which Radiant will provide processing services to Aurora for the production of cannabis and hemp extracts.

All these deals are important to Aurora, because they provide the company additional capacity and broader diversification. If the market for marijuana takes off as expected, Aurora's acquisitions and partnerships position it to grow tremendously.

While much of the excitement for Aurora stems from its opportunities at home, don't forget the company's international aspirations. If the CanniMed acquisition is finalized, Aurora Cannabis will have operations and agreements in the European Union, Australia, South Africa, and the Cayman Islands.

Let's just look at three of the countries where Aurora hopes to grow its medical cannabis sales -- Australia, Germany, and South Africa. These countries have combined populations totaling more than 160 million. By comparison, Canada's population is around 36 million.

Even without legalization of recreational marijuana in Canada, Aurora has a market opportunity for medical cannabis that's 4.5 times larger than its current market. And we haven't included all of the countries that the company is either currently targeting or will do so in the future. Granted, it's possible that use of medical cannabis as a percentage of the total population won't be as high in these countries as it is in Canada. Still, Aurora has an enormous international opportunity.

In Greek mythology, Icarus flew high on wings made of wax and feathers. However, he flew too close to the sun. The wax melted, and Icarus fell into the sea and drowned. Could Aurora Cannabis be like Icarus -- flying too high?

I think the risk is real. After all, Aurora stock is trading at a staggering 173 times trailing-12-month sales. However, the potential for the company to grow sales at phenomenal rates is also real. This marijuana stock could get too hot, but my prediction is that 2018 will be another great year for Aurora Cannabis. 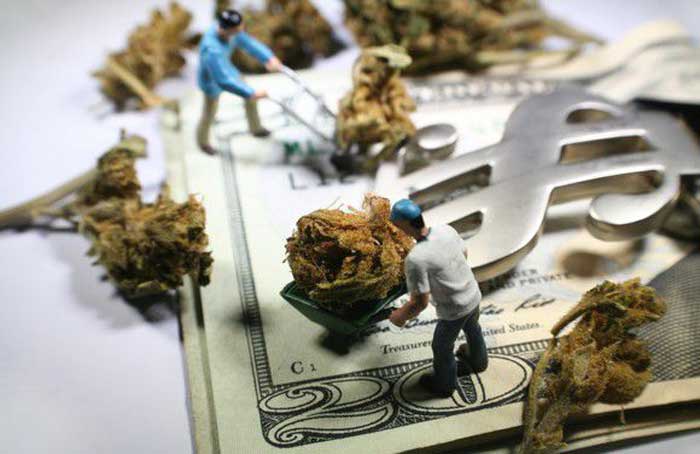 This Marijuana Stock Is Trying Everything Imaginable To Avoid Being Acquired