3 Things You Really Need To Know About Marijuana Stock MedReleaf

That's the good news. The bad news is that MedReleaf stock has underperformed all of its peers since the IPO. Does this mean that the stock has a flaw that the others don't? Or is its laggard status only temporary? Here are three things that you need to know before buying MedReleaf stock.

MedReleaf's shares haven't muddled along because of its financial performance. When the company reported its fourth-quarter and full-year results for fiscal year 2017 in late June, it revealed that revenue soared more than 50% year over year in Q4 to roughly $8.2 million in U.S. dollars. Adjusted EBITDA for the quarter came in at just under $1.3 million, down 17% from the prior-year period because of increased investment in long-term growth initiatives.

Those sales figures are significantly higher than results posted by Aphria and Aurora Cannabis in their most recent quarters. Canopy Growth, which has a higher market cap, still ranks as the top player in the Canadian cannabis market, however. MedReleaf isn't too far behind, with an estimated 19% of the Canadian medical marijuana market.

On the other hand, MedReleaf doesn't have as much cash on hand as its rivals do. The company reported cash and cash equivalents of $12.9 million at the end of March. The IPO added $74 million to that total. However, MedReleaf is allocating $55 million of the proceeds to expansions at its two facilities.

Overall, though, the company appears to be on pretty solid ground financially. There don't seem to be any significant issues of which investors should be concerned.

2. The growth opportunities are serious

As is the case with Aphria and its other peers, the biggest opportunity for MedReleaf is the potential legalization of recreational marijuana in Canada. Prime Minister Justin Trudeau has proposed making recreational use of the drug legal throughout the country by July 2018.

Professional services firm Deloitte projects that the annual retail marijuana market in Canada could be somewhere between $4.9 billion and $8.7 billion if the legalization effort succeeds. MedReleaf, like the other major providers of medical marijuana, should be in good position to obtain a license to also supply recreational marijuana. The company's production capacity, especially with its expansion initiatives, could enable it to significantly increase revenue and earnings in the years ahead.

Canada's medical cannabis market is also growing: MedReleaf estimates it will grow from a little over $100 million in 2016 to more than $1 billion by 2024.

International expansion presents another significant avenue for growth. MedReleaf's management has stated that it's focused on forging international partnerships to "replicate [its] Canadian success." One major potential market is Germany, which legalized medical marijuana earlier this year and is importing the drug until it can establish a regulatory program.

3. It's still a risky business

There are several obvious risks for MedReleaf of which investors should be aware. The most concerning is the possibility that the effort to legalize recreational marijuana in Canada could be derailed. If this happened, it would be a huge blow for MedReleaf and the other major cannabis growers in the country.

MedReleaf could also encounter headwinds in achieving its goals of expanding internationally. Some of its rivals appear to have a head start, which could hurt MedReleaf's prospects.

Any roadblock could cause MedReleaf's stock to plummet. Shares currently trade at nearly 63 times trailing 12-month earnings, and 17 times sales. Those metrics indicate that expectations for tremendous growth are already baked into the company's valuation.

Like several of the other Canadian medical marijuana providers, MedReleaf could experience huge growth in the next few years. However, the risks aren't trivial. Marijuana stocks in general aren't for the faint of heart. MedReleaf is no exception. 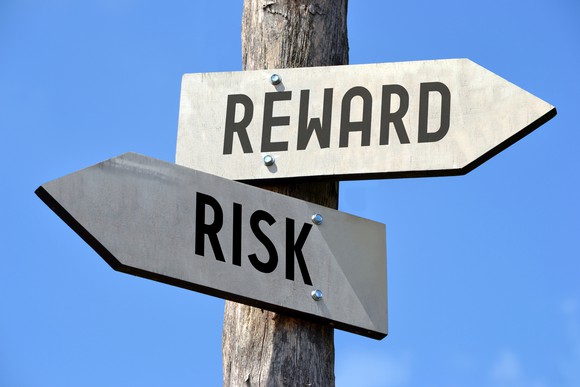