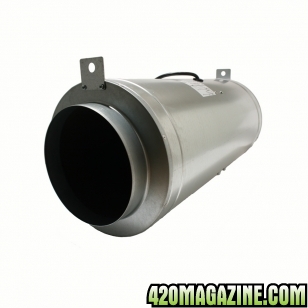 Hey all thought I would do a review of My 315mm FUTURETECH AIR FORCE 2 ACOUSTIC FAN.

Reason for the review is because before getting one i searched the net high and low and there doesn't seem to be any Reviews about them, the only information i could find was the Manufacturer's Specifications and description and this is :

The AirForce 2 is specially designed to reduce your noise levels while still ensuring optimal air flow. Powerful, lightweight and fitted inside a silencer housing these fans are capable of moving more air than your standard inline fan and more quietly.

The AirForce 2 uses unique computer designed fan blades to manipulate the flow of air in a different way to most fans. Most fans simply draw air into their centre and redirect in a vortex pattern, which is both noisy and inefficient. The Futuretech AirForce 2's move the air through the fan and the ducting while interfering as little as possible, keeping the airflow straight and natural.

This results in the AirForce being the most energy efficient and highest performing fan we know, coupled with the fact it's easy to hang, super quiet and great value for money we highly recommend them for anybody serious about hydroponics!

With Prices as high as these I thought to myself hmmm theres not any reviews i can find, or much about them so this is either going to be a complete mistake or the wolrd is missing out on this high end bit of kit.

At the time I was in serious need of having a decent extraction system as those damm cheap 200mm+ fans under Â£80 off eBay just don't cut the mustard and blow like a asthmatic with a chest infection, or they just burn them selfs out in a few months. soo i thought i want something decent - high end. something that will stand upto the test of time, work well, keep temps down and smells away. so thought right this is it im on a mission to sort this out!, once and for all. I got my Airforce 2 in a hydro store closing down sale and was down to Â£359.99 as it was the last one, I also got a 315mm Rhino Pro Filter X10m of 315mm Acoustic ducting and a temp controlled fan speed controller for an extra Â£400.00. So spent a massive Â£759.99 still a bargin though considering the original RRP of this kit is over Â£1000.00

So after sitting in traffic for 45mins and getting all excited about testing it all out I literally parked up at home and couldn't get in the door quick enough, but then saying that the fan is no light weight and nor is the filter. I got it in the house pretty much wiped the kitchen table and plonked the fan down, I opened the box and on first impressions the fan is very well made, real solid feel to it and the design is flawless. I wired it up and got ready for a test fire....

So knowing already it was going to be an absolute power house I thought haha practical joke time.. The misses was reading the paper sat at the other end of the kitchen table so I thought hmmm I got an idea. I made sure the output side of the fan was pointing her direction and flicked the switch.. within 3 seconds the paper had literally been blown away lol if looks could kill I wouldn't be here now.... The power of this thing is immense! my first thought was SHIT---OVERKILL!!!!! it was honestly like being in what I imagine to be a hurricane and at this point it wasn't the silent fan I originally read about or was expecting it to be this also got me worried as noise pollution in my neck of the woods is a dead give away.

So knowing what an absolute beast this monster was I thought well I wont rule it out until its been properly installed so off I went. to begin with I had it mounted in a 2m x 2m x2m tent and gods honest truth once you have the filter attached to the other side of the fan its just under 2m long!! so I hope that puts in into perspective on my thoughts of over kill!! After setting it all up, connecting the ducting, clamps and duct tape I then decided it was time. I turned the beast on and to my surprise it was dead silent. in-fact it was freaky as I could always here my old system running and now next to nothing. just a slight hum... But more about that later.. I was honestly shocked. I then closed the tent up....

So I closed the tent up with it running and within 5 seconds the entire tent looked as if it was going to implode. In-fact it had sucked its self so hard the super strong stitching on the tent had split in about 7 places... I literally thought NO Way and felt kind of depressed. I have always ran with negative pressure and the rooms window is always open so fresh cooler air is always being pulled in from that pressure but still needed a light proof environment for the plants and for nosey neighbours so the tent had to stay..

I then thought ok lets think about this for a minute. an intake fan is an option and I do have a 10'' ruck from a previous grow so I got to work and installed it. switched it all back on and there was still too much negative pressure so at this point im thinking shit shit shit, then out of no where with a punch the the face the thought comes in!! The temp speed controller!! so I rigged it up and manually set on 7 out of 10 (1 being off 10 being full) and switched back on.... PROBLEM SOLVED!!!!!! but with a new problem... Fan HUM....

Got there in the end..

So the fan was huming and I mean humming. constant whine that never stopped. how was I going to sort this out. well remember I said about how big the fan and filter was?? I was debating if I should of mounted the fan outside the tent and just keep the filter in. so I decided to put the fan in the loft ( heavily insulated up there) and run it like this..... Filter ---- Ducting --- through tent up through ceiling --- Fan --- Ducting --- steam flute. so I set to work after doing all this I had finally solved the problem. totally silent grow room. Buckets of power and the hum well lets just say I can only hear it slightly if I am stood in the right place and am trying to hear it. The fans power is totally immense and since then iv moved to a new location have blacked the window out in the room and made it light tight so during the hotter days I can open the tent door slightly and bang the fan on full power.

We had a few days this summer with temps in the 30.c mark outside. The Airfore 2 and intake handled this well. as the intake is brought in from a part of the house totally in shade and the fan can exchange the air about 7 times a minute so all in all the fan has been well worth it.

My opinion. After now owning the fan for nearly 1 year. it is still going strong. never skipped a beat and has preformed amazingly. the high price seems irrelevant now as it has paid for its self. great plants. no smells and stands the test of time. if you have the money to get one, really do it you wont be unimpressed just beware as there may be some modifications you have to make in order to get the best from it...

hope you all enjoyed the read and I hope this will help a few people looking for a review of the Airforce 2 fan.

take it easy all... Zoot
Current grow.. check it out and say hi