There wasn't much wake 'n' bake happening on the University of Colorado's Norlin Quad this morning, although police officers have been seen issuing tickets to early revelers.

Police have issued at least two tickets for marijuana possession so far today.

In the hours leading up to today's annual, and very much unsanctioned, 4/20 marijuana smoke-out -- set for 4:20 p.m. in the heart of the Boulder campus -- the quad is mostly empty of pot enthusiasts.

But Tony Schindel, 28, arrived early -- in his bath robe, a green beaded necklace and a cannabis-themed T-shirt. He and his friends packed pipes and pre-rolled marijuana cigars.

This is his first 4/20 in Boulder, he said, after moving from Texas last year.

"I'm hoping it's a lot of calm people here having a good time," said Schindel, who supports marijuana legalization.


A man on a bike is circling the quad wishing everybody a "happy 4/20."

Police have shooed away a group of young people with T-shirts for sale because they don't have vending licenses.

Police and event staff are stationed on the field. This year, officials have placed numbers on the light posts, possibly to estimate the crowd size or better locate people if problems arise.

CU police Cmdr. Tim McGraw declined to comment on the purpose of the numbering.

The university contracted with Argus Event Staffing to help control the anticipated crowd, which in recent years has numbered about 10,000. The workers are making sure no one without official CU business is parking on campus and that revelers don't aimlessly wander into campus buildings. 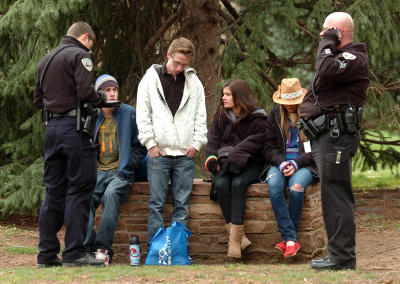 CU police officer A. Trojanowski, left, and Sgt M. Dodson issue marijuana-possession tickets to two of four people on the Norlin Quad on Wednesday afternoon. The three people on the bench refused to give their names. The man standing identified himself as Luke from Denver. (PAUL AIKEN / CAMERA)​