Denver's first 420 Rally since Colorado's legalization of marijuana is expected to be the largest yet, but don't expect attendees to light up in a joint celebration. As the Mile High City's police step up security for the growing annual event, organizers say they'll focus on protesting the state's existing marijuana restrictions. "It is time to make your voice heard in response to the proposed regulations that have been handed over to the Colorado General Assembly," 420 Rally organizers said in a statement on the group's website. While Amendment 64 allowed recreational marijuana use to become legal on Jan. 1, supporters are pushing for the legal right to openly use weed in public, as well as for legalization nationwide.

Colorado Gov. John Hickenlooper has long opposed the original amendment and expanding on it. "Colorado is known for many great things, marijuana should not be one of them," Hickenlooper has said. "As for this weekend, [Hickenlooper] encourages people to act responsibly," the governor's spokesman, Eric Brown, told NBC News. Some Colorado politicians argue that the event – expected to draw some 80,000 people over Saturday and Sunday to Denver's outdoor Civic Center – should have been cancelled altogether. "The state constitution and city ordinances make smoking pot in public illegal. ... If they want to celebrate 4/20, they should do so in the privacy of their home," said Denver City Councilman Charlie Brown.

The Denver Police Department "will have a large presence" at the 420 event, but officers will use "discretion" when handing out citations to those lighting up at the rally, Denver Police Department spokesman Sonny Jackson told NBC News. Event officials have also bolstered security after a shooting halted the festivities last year. The 420 website said a fence will secure the perimeter of the square and people should expect precautions similar to those at a sporting event. "We don't know what we're going to see today," Jackson said. "It's a lot bigger than it has been in the past."

The free event is featuring musicians such as Wyclef Jean and hip-hop artist B.o.B, art installations, vendors and plenty of munchies, organizer Miguel Lopez told NBC affiliate KUSA. And pot revelers across the state have their choice of 46 other weed-centric events, according to the Cannabist, the Denver Post's site for all things marijuana. The exact origin of the number 420 – celebrated on April 20 – as the universal symbol for pot remains hazy, said Dale Gieringer, a coordinator at the National Organization for the Reform of Marijuana Laws.

As urban legend has it, the term was coined by a group of students in the 1970s calling themselves the "Waldos," who would smoke a joint after school at 4:20 p.m., Gieringer told NBC News. "The first time I heard about it being celebrated as a date, April 20th, was in the early 1990s, when it had become a local hippie custom," he added. The 420 Rally website backs up that version of the lore, and encourages festivalgoers to use the origin of the number as a "conversation starter" – just in case anyone there is at a loss for interesting topics to talk about. 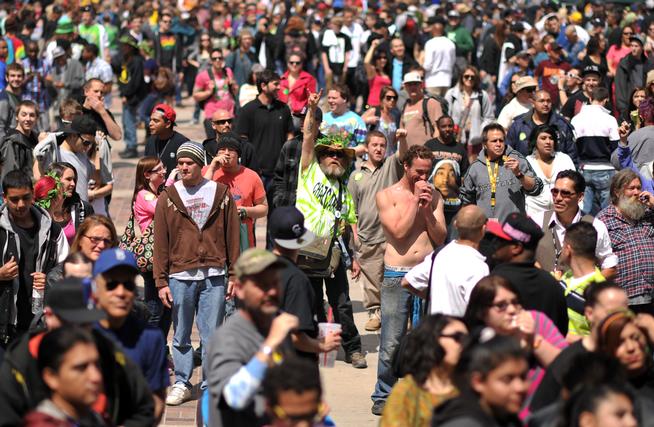