Since successfully getting her Colorado MMED badge, Sloane Poorman, one of many MMED badge holders, works 10-hour shifts at one of the new recreational facilities where she's paid $12 an hour, not including tips. While she hopes to go into advertising and media one day, the 23-year-old college student is extremely happy with her current job, which she describes as "one of the best jobs" out there. Poorman's first task during her shift is to take the "pounds and pounds of pot" out of the huge safe in the back of the store and weigh it "so there's enough samples" before "putting everything else back in the bags." People just think that you smoke weed to get high, but that isn't true," Poorman told PolicyMic. "There are several types of weed that help with back pain, we even have lotions to help with overall pains and aches." "People need to educate themselves instead of just thinking that pot is bad, they don't know the positive effects that marijuana can have on you," she said. "I mean, we have cancer patients and people who have been injured." 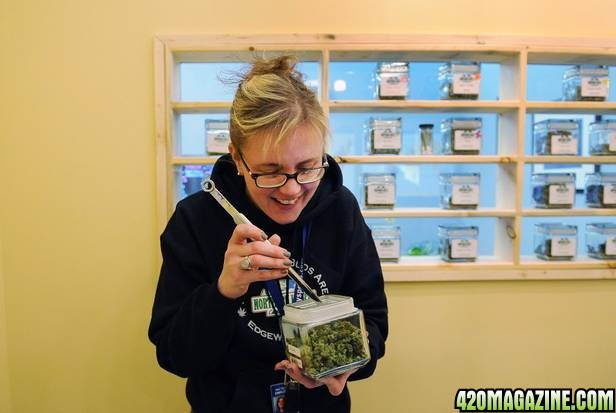