Owned by Genifer Murray, one of the prominent women involved in the marijuana industry, CannLabs is a full fledged marijuana testing lab. CannLabs analyzes both marijuana infused products as well as other products like hash concentrates. For example, they'll use this high performance liquid chromatograph, the sort of precision analysis device you'd find standard in any sort of sophisticated chemistry lab, to analyze a solution they made of, say, a marijuana infused beverage to find out the concentration of the cannabinoids. - MJ Legal News 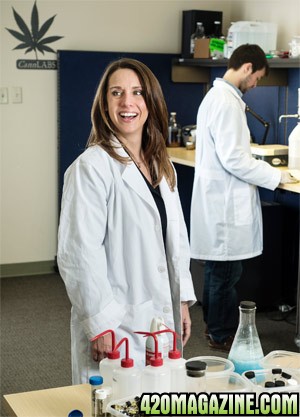 If Genifer Murray, founder and CEO of CannLabs Inc., seems to be in good spirits, it might be because her three year old marijuana testing facility is about to see business explode. Currently, Murray estimates that six percent of the Colorado MMJ industry uses her services to gauge products for potency and contaminants. That number will likely skyrocket, as the state's retail marijuana rules will require strict testing. Murray says her company has found that many growers and sellers exaggerate their amounts of THC, the psychoactive component of pot, and cannabidiol (CBD), one of the most medically beneficial parts of the plant. Murray cites one edible product she tested that claimed to contain 300 milligrams of CBD but in fact had just 16 milligrams. "It's like paying for Vicodin and getting sugar pills," she says. Murray's advice to wary consumers? Stay away from the chemically processed stuff, such as hash and hash oil, and look for label claims backed by a testing facility, all of which have to be licensed. That, and don't just go for the products touting sky high amounts of THC. After all, potency doesn't equal quality. "When they want a drink," Murray says, "most people don't just go and buy Everclear." - 5280 The Denver Magazine