The undisputed Queen of Medical Marijuana in the city of Kitchener, Ontario, is a charismatic young woman known locally as "Starr". She began her "Marijuana Used for Medicine" club at about the same time that her friend and pot colleague Harichy started hers in London, the winter of 1998. Starr runs her medical marijuana club single-handedly. She sources out the finest buds the region can produce for her 50 registered patients. She signs up about 5 new patients every week, which is about one every working day. Each patient comes with a complete recommendation from a real medical doctor, paperwork is a big part of her day. She is altruistic without being flakey, has a clearly defined goal and a well researched strategy about how to get there, with back up plans if people along the way let her down or get shot down themselves. The outstanding feature of Starr's operation in Kitchener is the high level of professionalism. She is not a medical patient, and has never been busted for pot, but she has indeed smoked the herb and knows her way around the myths and sinkholes of marijuana lore in the late 20th century. This is very helpful when she goes out to inspect pot suppliers' gardens and make inventory purchases. She has a high degree of insight about the curious nature of the cannabis plant in general and cannot be persuaded to purchase anything but the best and freshest well grown medical produce for her patients. If you can imagine a modern day Florence Nightingale with a bong instead of a lantern, you have some idea of how the future of medical marijuana clubs will be. Starr enjoys a puff of weed from her own little bag at the end of a hard day like anyone else, but you will not find her dipping into the medical stash, that would be unethical. "I don't smoke pot when I am working," she says. "It's not professional to be stoned at work. 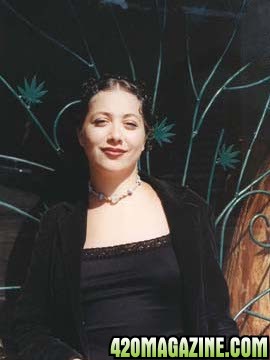