Maybe it was the fireplace and the free sandwiches or brownies. Or maybe it was the remixed John Denver and Steve Miller Band jams. Regardless, dozens of marijuana seekers on a Monday morning, the first day of legalization, happily waited in lines for more than two hours for a chance to make history. C-Nine Caregivers, opened its doors promptly at 11 a.m. and became the region's first shop to begin selling recreational marijuana. After last minute launch party preparation, the handful of shop employees let customers through the door a few at a time and led them to a table to check their IDs. Patrons were then given a number and hung out in a room crowded with reporters and TV cameras until they were escorted into another room a few yards away, equipped with a glass bar, a cash register and shelves lined with jars of marijuana and other marijuana infused products. The first person in Weld County to buy recreational marijuana was Rhonda Diciedue, 50, of Evans. She said she suffers from severe asthma and painful muscle spasms in her lungs and has been treating the conditions with medical marijuana from C-Nine Caregivers for more than three years. - The Greeley Tribune - Zoe Higgins and April Morlock pictured 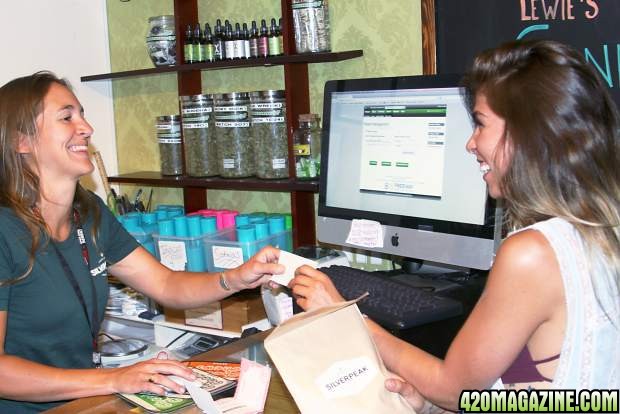