I thought I'd start a journal for anyone who's interested and also it might be better than posting a million different questions in other parts of the forum!

About me: After numerous health issues for over a decade and regular meds not helping, I've decided to medicate in a different way! I've actually never smoked pot before so this should be interesting

Last October I naively thought I could grow an NL feminized photo on my windowsill during winter, but soon realised this was not to be the case! The first seedling died (RIP) and the second stretched like crazy but is still alive after spending several months on my windowsill (growing INCREDIBLY slowly!) and is now enjoying her new home in my tent I bought about a month ago, along with T5s and a desk fan. I actually had problems right from the start, however. I germinated 2 NL autos and put them in the tent with the other seedling, but I didn't realise how much heat would be generated from the T5s so unfortunately my tiny seedlings suffered from major heat stress as I didn't have an extractor fan. I removed the T5s and replaced them last week with 2 15w CFLs which they're enjoying a lot more. Heat generated from them is next to nothing so temps in the tent are manageable at the moment. My ladies' first set of true leaves shrivelled up and died under the T5s (which you can see in the pics) but the new ones coming through look nice and healthy (although surprisingly rounded!). The photo is actually doing pretty well (compared to previously!) under the new lights too and boasts the biggest leaves. They're still growing pretty slowly though but I guess it's because they're only getting 30w of light at the moment.

These were my autos under the T5s a couple weeks ago: 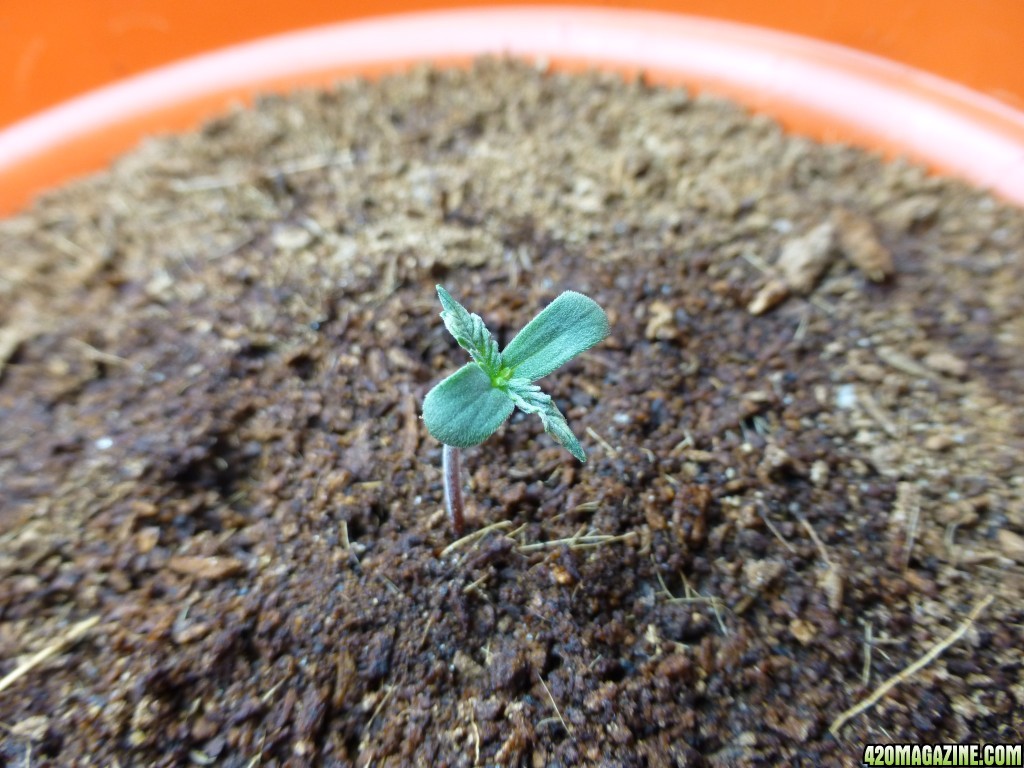 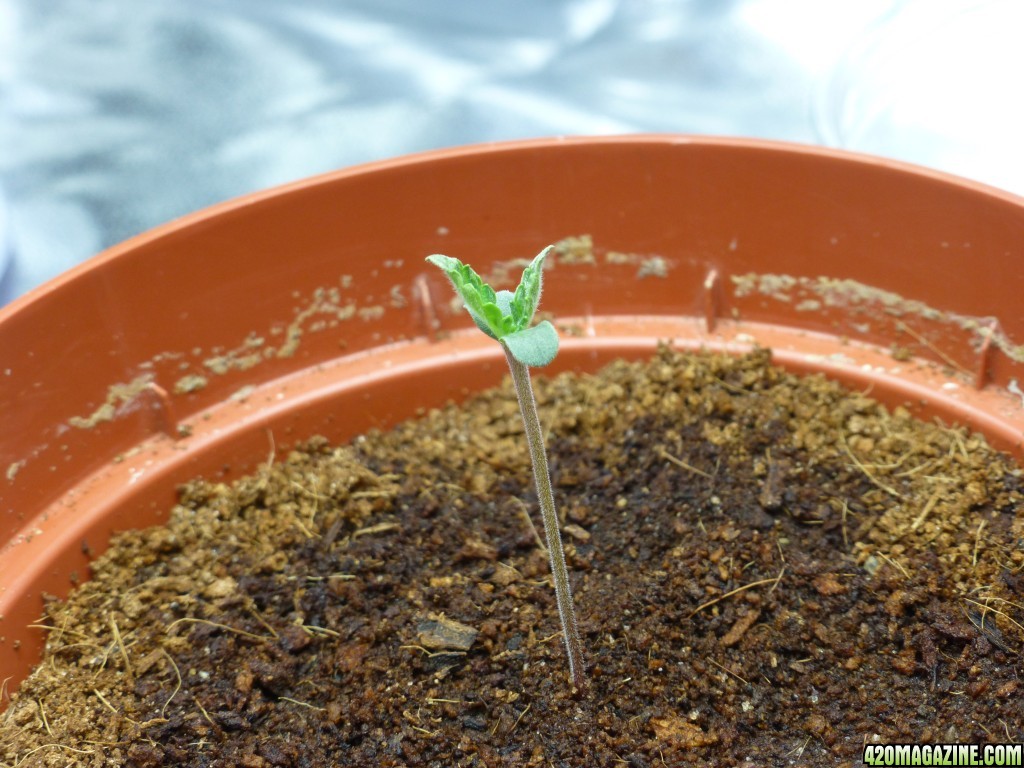 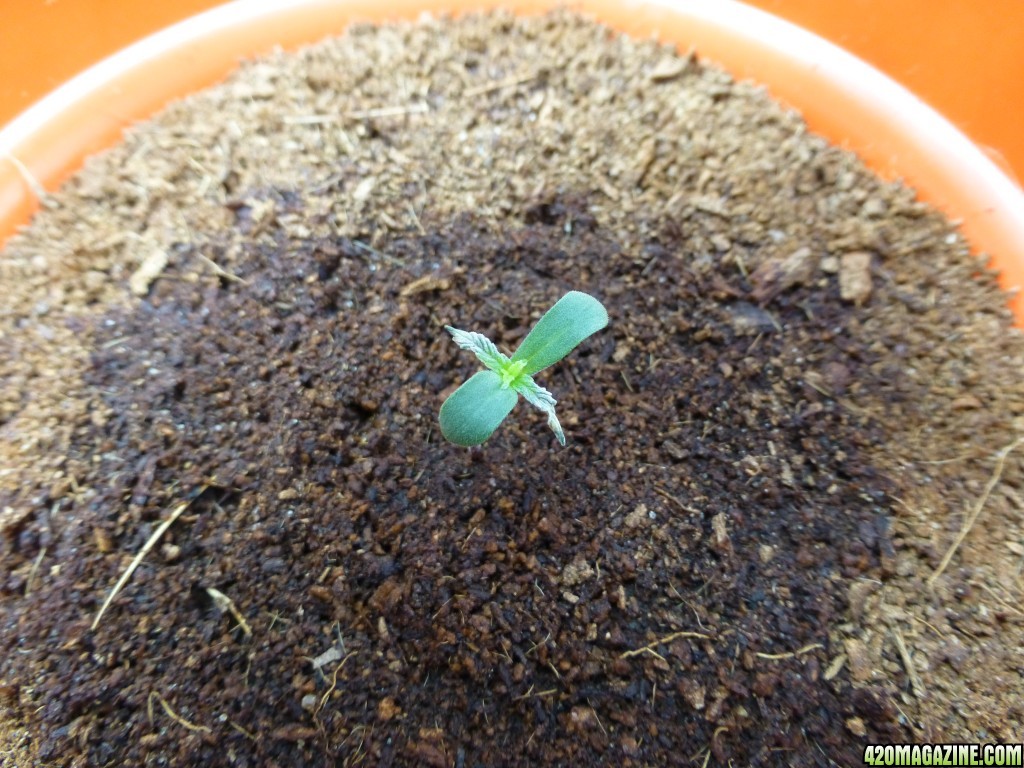 And today (excuse the yellowness of the 2700k CFLs): 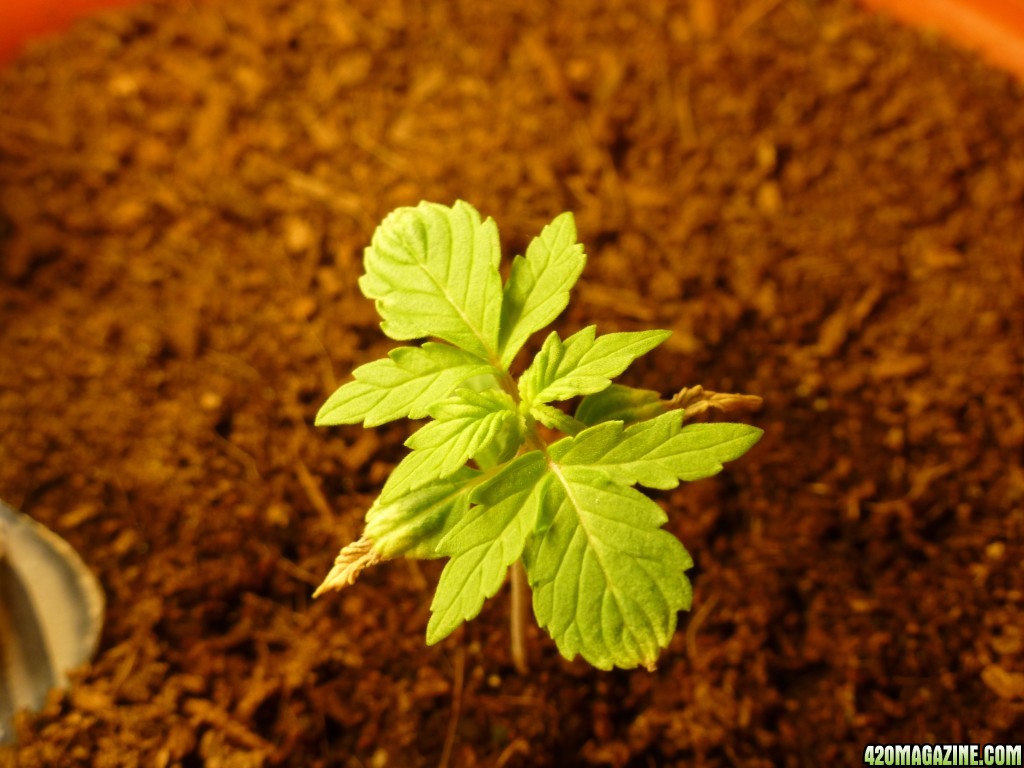 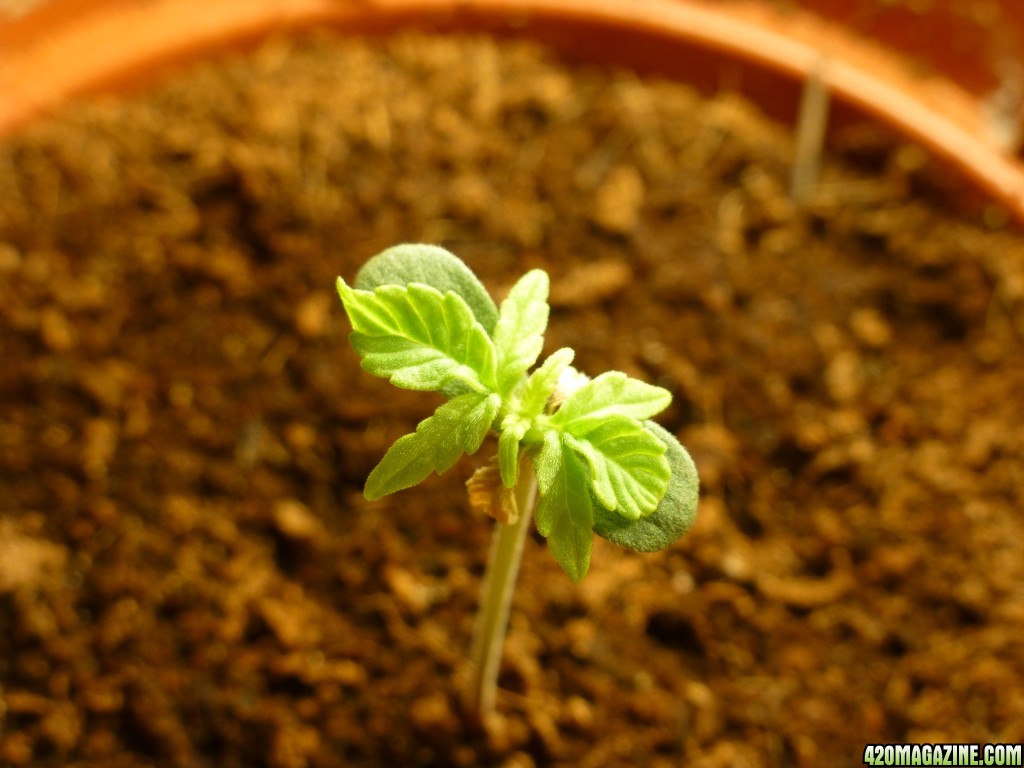 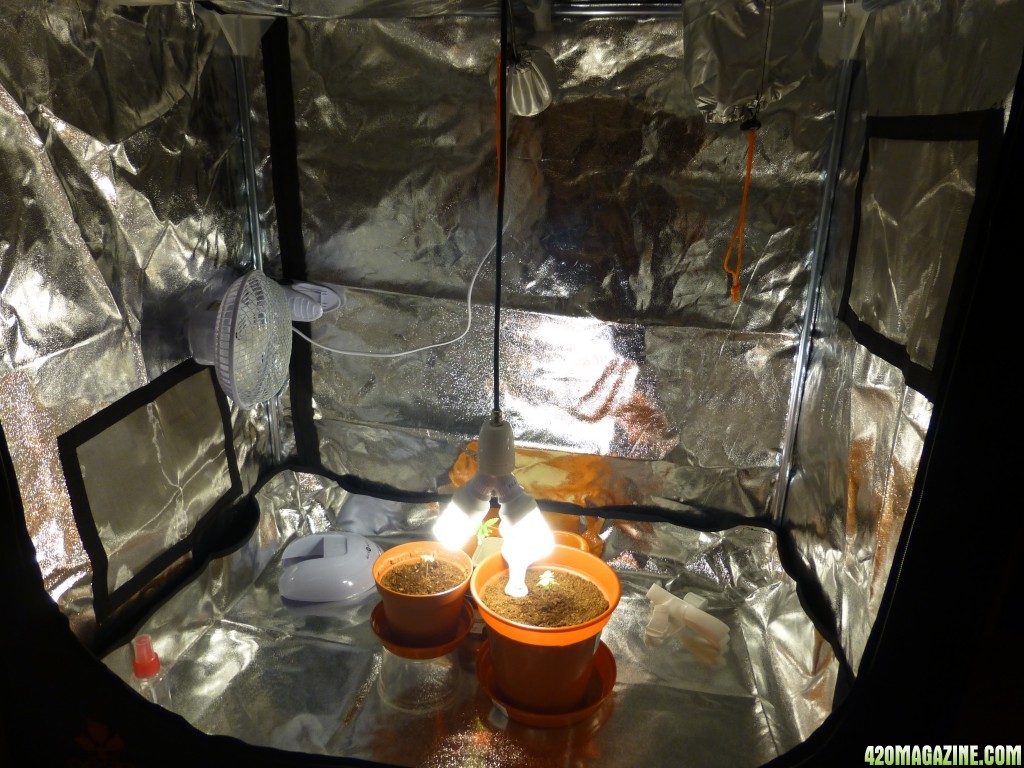 This is my 4 month old photoperiod. You can clearly see the bad state of the lower leaves: 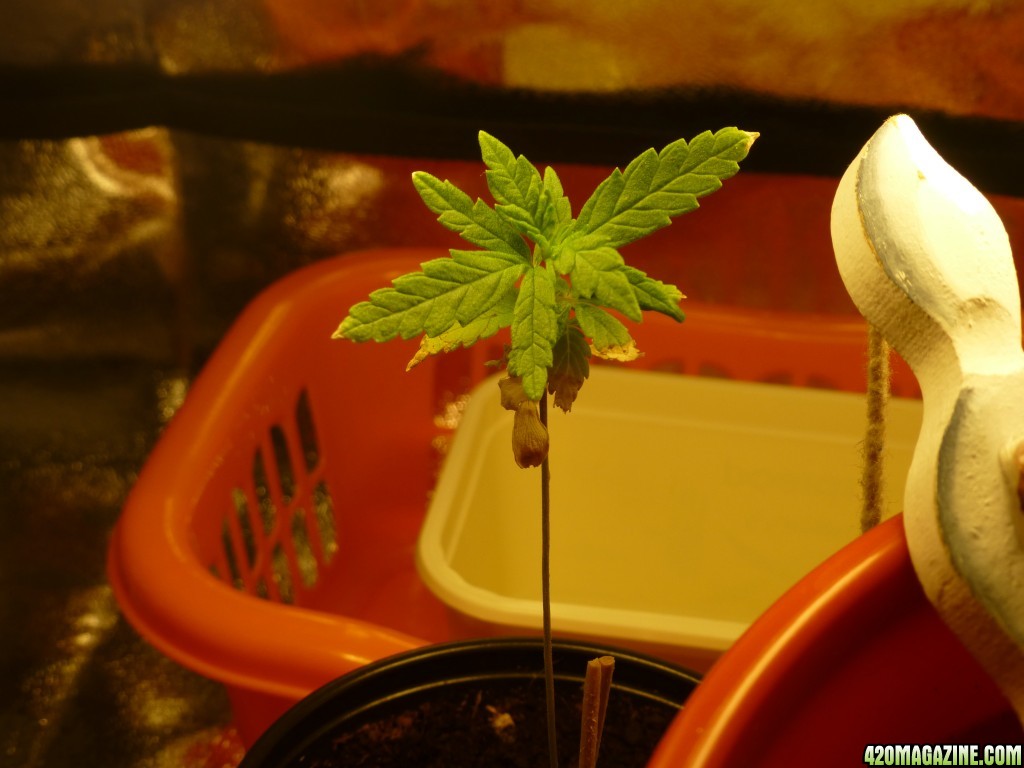 Unbelievably the lower setting on my fan (which I need) broke pretty much straight away and last week, just as I was about to swap out my T5s for CFLs, the damn lamp lead broke too!! So I removed 3 of the 4 bulbs from my T5 unit and put that back, but it then started buzzing (which it never did before) which freaked me out so I got a replacement lamp lead and attached the CFLs. So unfortunately so far my grow has been nothing but stress and worry! Hopefully though once I get everything in place it might settle down and become more enjoyable. Also I haven't slept well because the only place I can keep my tent is in my bedroom so the noise from the fan keeps me awake at night, and I haven't even got the extractor fan yet. I nearly gave up last week when the lead broke because it just seemed like something was telling me not to do this :surrender:

I've made a ton of mistakes so far so if I even get ANYTHING decent from this grow I'll be really happy. It's been a massive challenge already so I'm hoping all my hard work will pay off.

It will pay off, surf 420 and read lots of journals and youll soak up a lot of knowledge quickly.

Looking good bro. Don't worry about the lower leaves on the little fella will perk back up. Remember it's only your first grow and we are here to help.

Sorry to thread jack but heres some motivation. This guy was neglected and left with no nutrients for 4 weeks you can see the yellowing of entire plant. Not looking good. 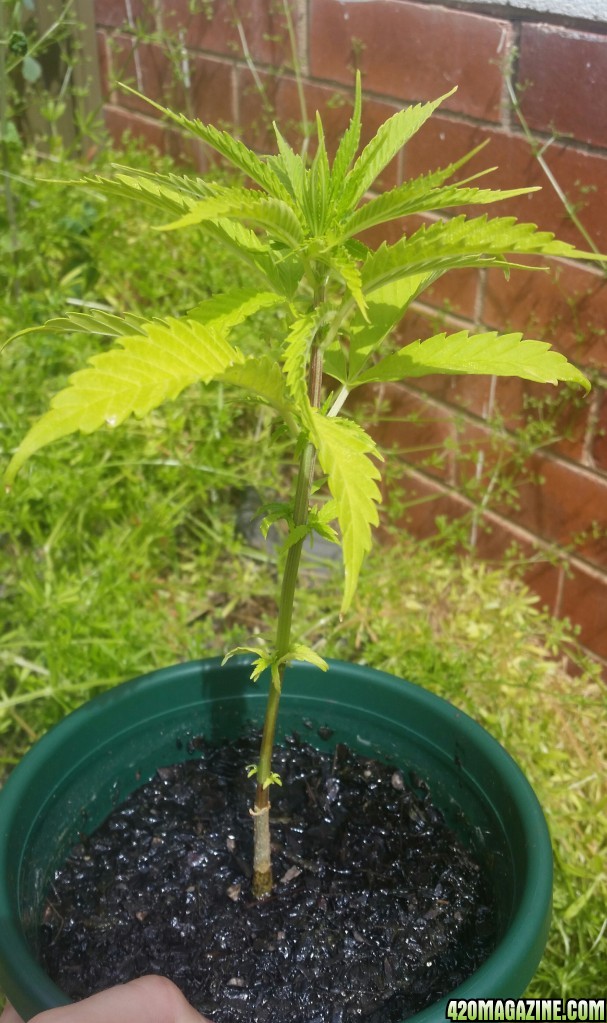 This is the same guy after a lot of attention and been fed properly with Advanced Nutrients Micro, Grow, Bloom at 4ml per feed 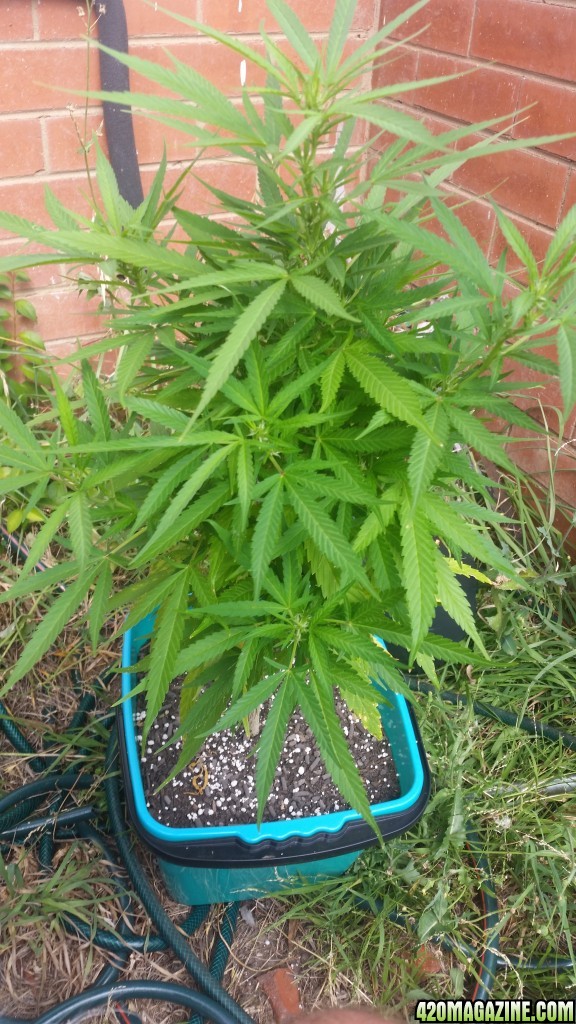 Whoa! Look at that - it's like an explosion of green, leafy goodness. Thanks for the support and sub!

Unfortunately my bulbs came when I was out today so my girls are going to have to wait another day before they get their lumens doubled. My photo (biggest plant in the pics) is actually smelling already by the way! It's so small and I figured they only start smelling when they flower but perhaps I'm wrong! It was amazing when I opened the tent the other day and thought..."Hmm....I can smell weed!"

So I've got my new bulbs installed and guess what...my carbon filter that was supposed to come today wasn't delivered!! Oh well it's a good job I'm not in a hurry to receive it. Not sure of the quality of the bulbs either, they're definitely brighter than my last ones but not double the brightness I don't think, despite being double the wattage. Anyway, here are some updated pics: 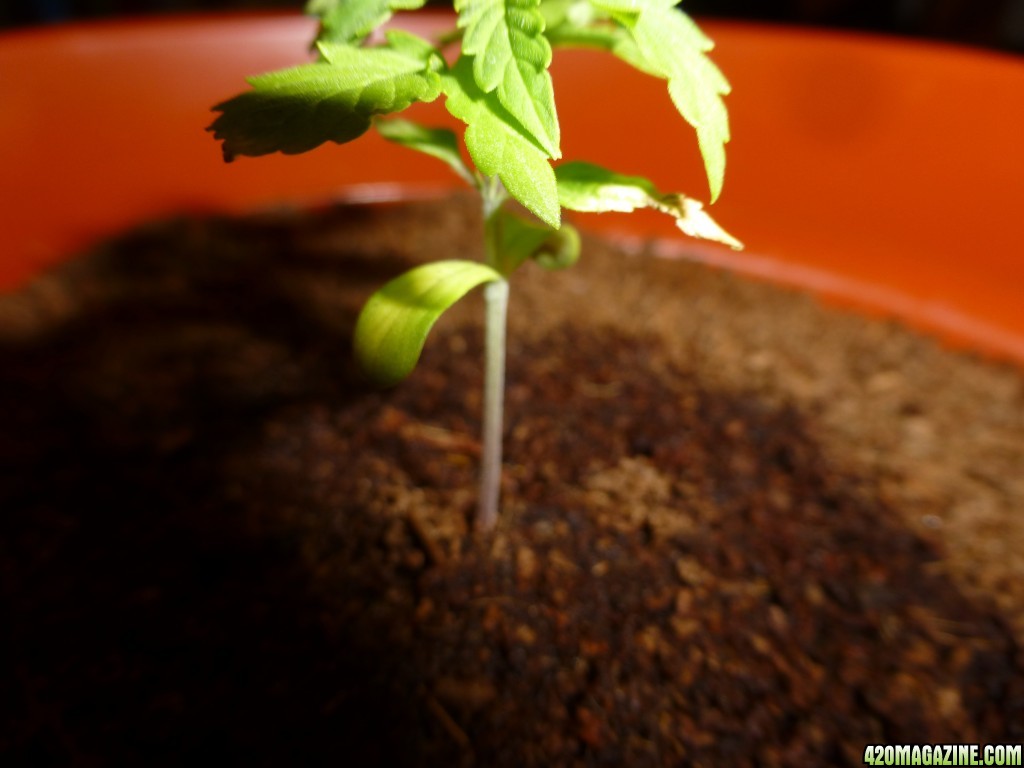 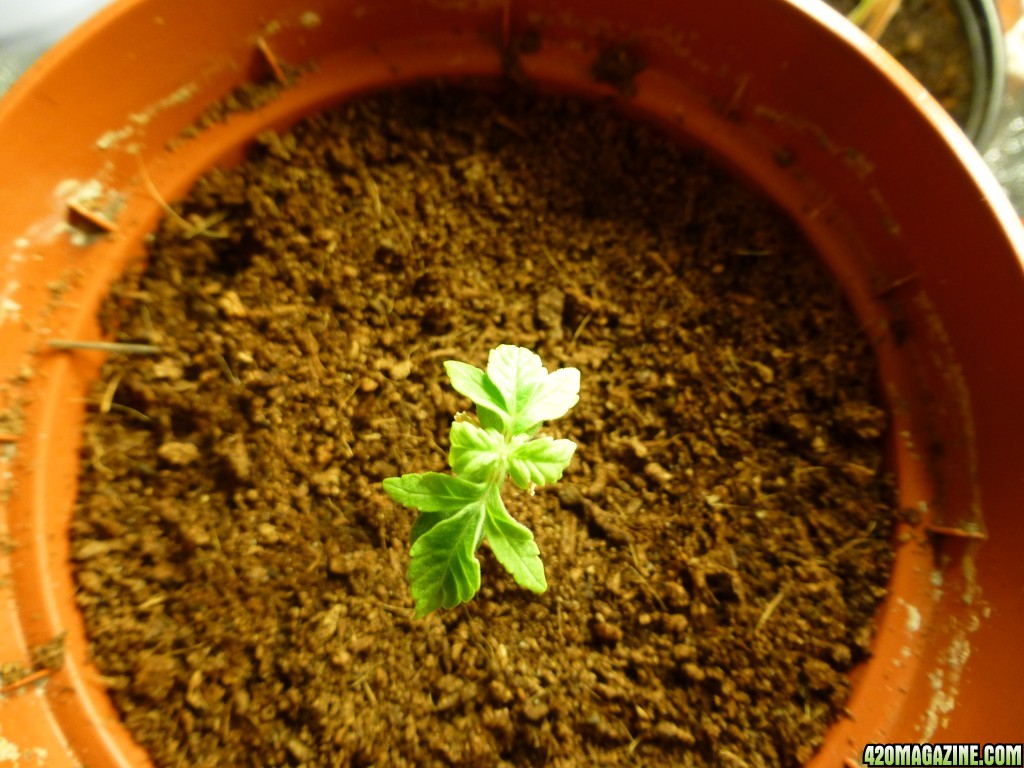 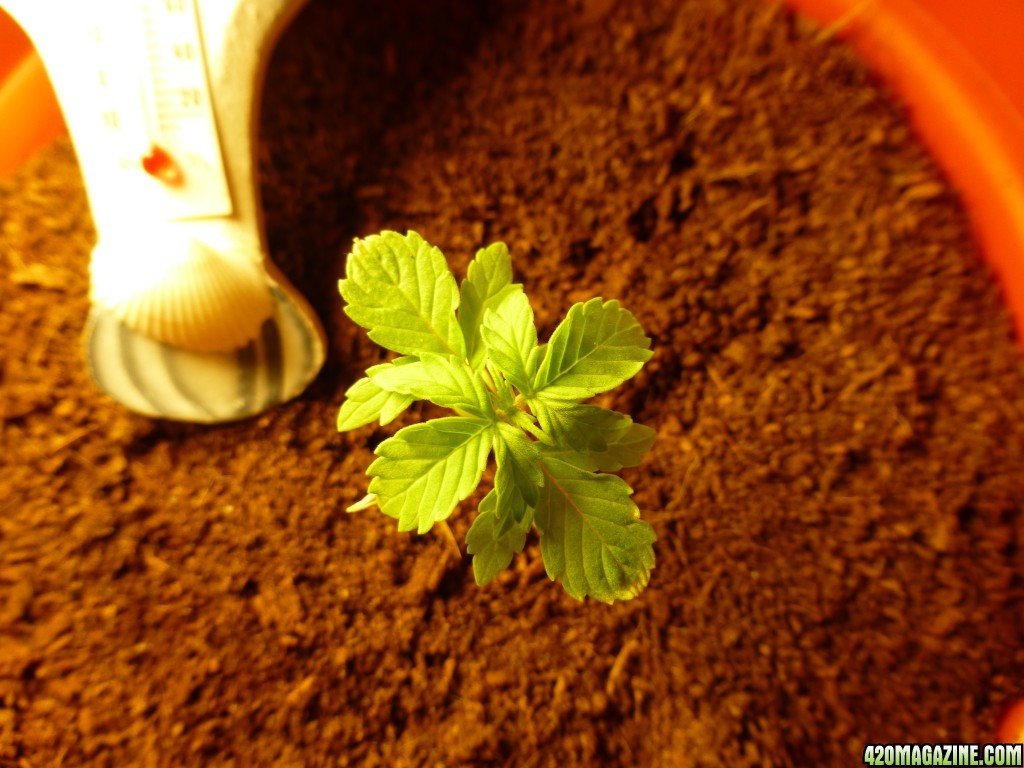 It's not that easy to tell from the pics because of the light but the cotyledons on the bigger seedling have started to turn yellow. I figure nitrogen def so I've given it some more nutes and if it doesn't get better I'll mix up some more and increase the strength a bit.
420 Girl's First Grow - Northern Lights - 2017
4

Also the top set of leaves in the last pic look rounded like the ones underneath but in fact they're not, it's just that they're quite curled up and the angle makes it look like they're round!
420 Girl's First Grow - Northern Lights - 2017

Its normal for the cotyledon leaves to yellow and fall off, theyve served there purpose.

Thanks for the info Budley & Pennywise! My temps are always within that range which is good, not sure about RH but it's definitely more inside the tent than outside. I've put a tub of water in the tent for evaporation and also put some of my chilli plants in there which hopefully will help increase humidity.

Sounds good 420Girl, they should take off soon on a growth spurt.

pennywise said:
Sounds good 420Girl, they should take off soon on a growth spurt.

And they indeed did! I've had to raise my lights twice in 2 days. Here are some pics: 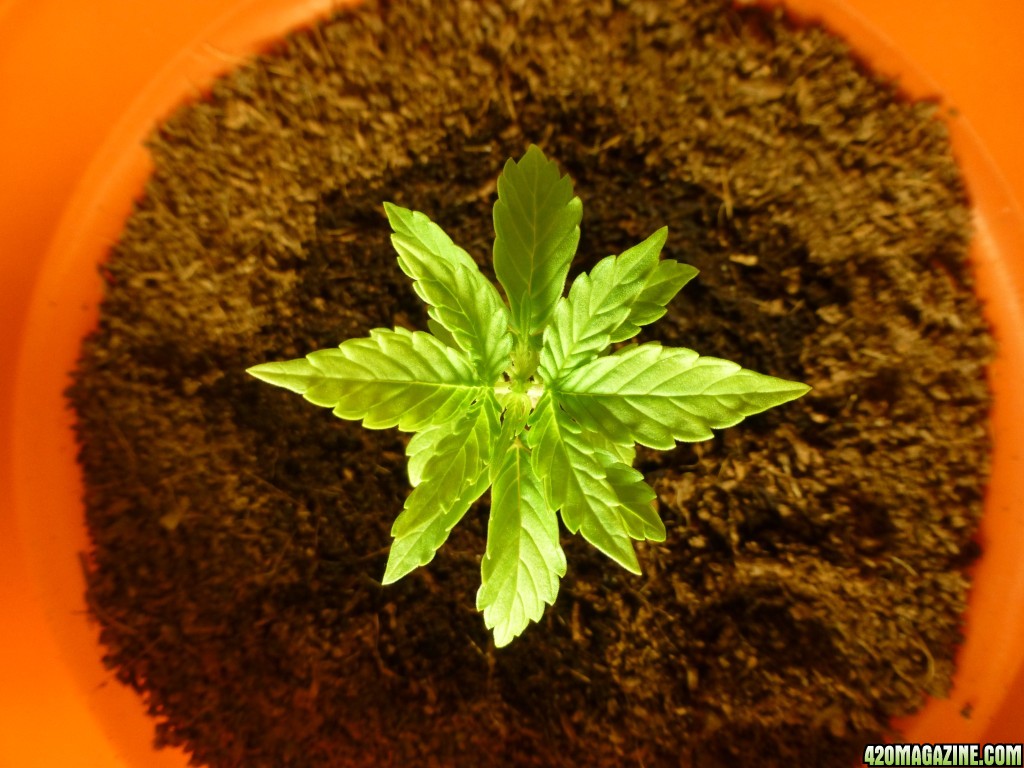 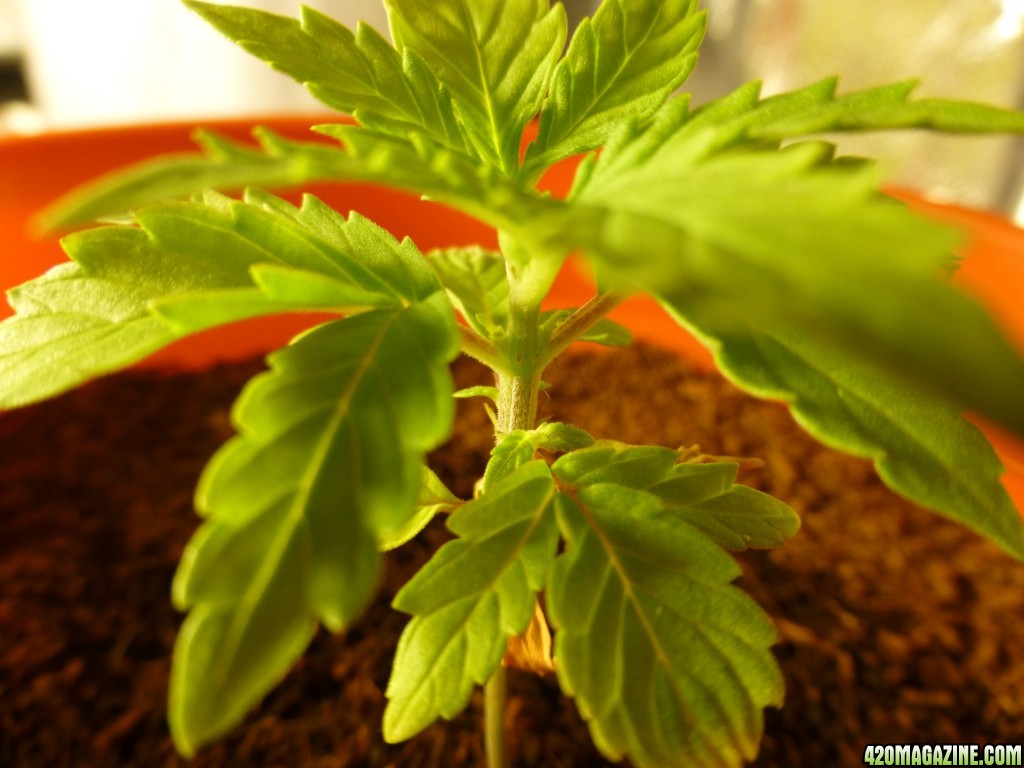 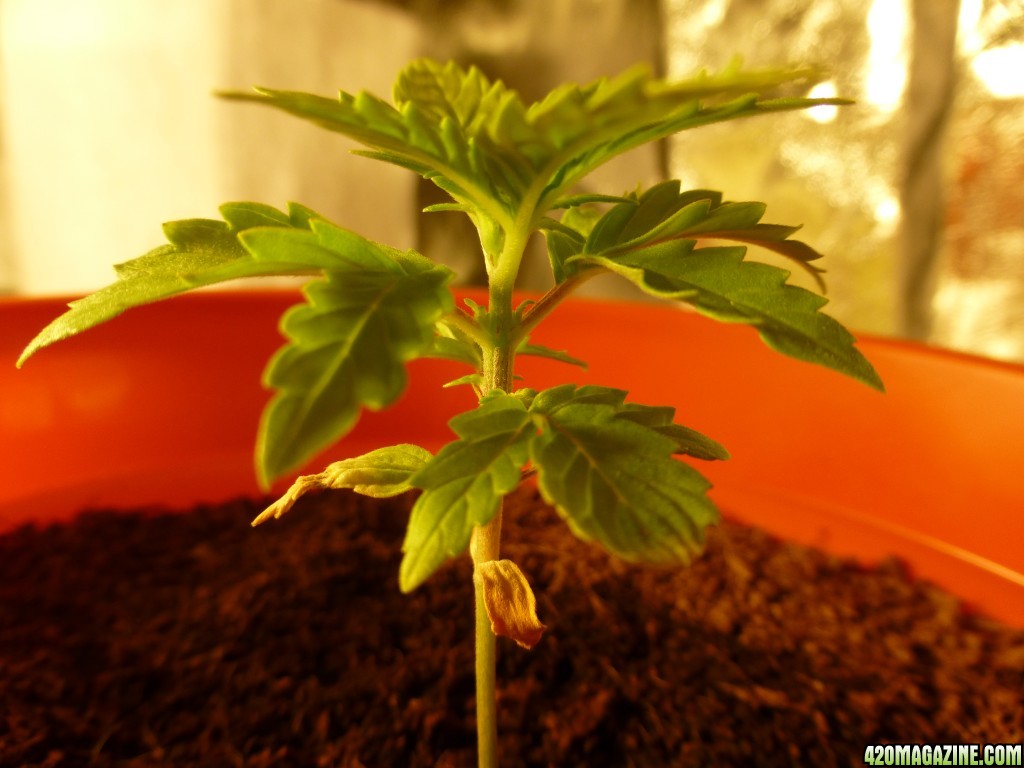 Lol all good, yes their growing fast. Normally you want to water daily in coco and never let it dry out. According to LEDRF coco holds 30% oxygen when saturated so very difficult to over water with coco. If your nutes are mixed strong just back off a little and water until you get run off. Make sure you have plenty of drainage holes in your pots.

Hey just found this will follow through your grow. I just started one as well check it out and we can share experience through the grow.

Thanks Kushman! Sometimes when pennywise isn't here I feel like I'm talking to myself haha

And yeah sounds good, it's so much better to share this experience with people so we can all learn

Thanks again for the tips pennywise, they did seem to perk up when I gave them more water and nutes and I'm still not watering as much as I could I don't think, so gonna go and give 'em a drink now

Thanks 420girl! Its a learning experience for all of us, and dont be afraid to water coco because its technically a form of hydroponics. The reason overwatering in soil is bad is that it doesnt drain well and water in the pot stagnates quickly. Remember coco holds 30% oxygen when soaked so every time you water the plants receive more oxygen.

Hello, found your grow journal. Plant is looking very healthy! I'll be subbing so I can see how you get on

Think I'm going to go coco for my next grow. LEDRF is correct, it's pretty much impossible to over water in coco. Definitely try and water her every day if you can, some people even recommend watering twice a day in coco so don't worry about over feeding

Thanks Blue! I (like a lot of people probably) was quite worried about overwatering so was very hesitant about it but now I'm watering with confidence thanks to you guys!! I can already see my girls are definitely doing better since giving them more water and thus more nutes, I just checked on them and they're bigger already

I can't wait for them to get big enough so I can start doing some LST.

Subbed to your grow too

Here for the ride