Israel has been the cutting edge of medical cannabis research for decades, and has made some of the groundbreaking
discoveries to date.

The father of the medical cannabis research is Raphael Mechoulam, an Israel Prize winner, who was the first to identify and isolate the THC molecule. Since the inception of his research in the 60s, a whole industry has sprung up — and as global cannabis laws continue to ease, the nation is poised to be at the forefront of the industry.

Legal cannabis sales across the world totaled $150 billion last year, and sales in the United States alone are expected to reach $21.8 billion by 2020.

Israel is at the center of this huge growth because of its well-developed ecosystem of cannabis researchers, farmers, entrepreneurs, pharma and government policies.

"You can't put cannabis into a category. It's not just pharma and it's not just agro-tech. It's not just lifestyle or recreational," Saul Kaye, the chief executive of iCAN, an Israeli venture fund focused on cannabis, told ISRAEL21c.

Kaye says Israel is up to 10 years ahead of other countries in cannabis innovation. The Hebrew University of Jerusalem has a multidisciplinary center on cannabinoid research, Ariel University offers a course on the use of medical cannabis, and the Volcani Agricultural Research Organization is building a national institute for medical marijuana research. iCAN also hosts the annual CannaTech cannabis innovation summit. The next summit is set for March 20-22 in Tel Aviv.

"This change will significantly increase entrepreneurship and investment into cannabis in Israel as the old stigma of criminal cannabis disappears," said Kaye.

Since the government's mid-2016 reforms to open up licensing for as many marijuana growers as the market will support, over 200 individuals and groups have applied to join Israel's current eight cannabis farms.

"Israel is one of the leading cannabinoid centers of research in the world. There are about two dozen groups working on it and people come from all around the world to see what we do," Mechoulam told ISRAEL21c in 2012.

Last month, the government announced that it is investing more than $2 million in 13 cannabis research projects, including its effect on MS, preventing transplanted organ rejection, and inhibiting the development of harmful bacteria.

GMO foods may carry negative implications for some, but when it comes to medical marijuana, genetic engineering is deemed crucial for treating a range of diseases.

Israeli scientists are among the world leaders in modifying marijuana's molecular structure to tailor cannabinoids to specific receptors for treating symptoms.

Hebrew University researchers have synthesized 22 versions of the cannabinoid THC that have great potential for treating neurological and inflammatory diseases.

"The Hebrew University holds a rich IP bank of cannabis patents. It is easier to conduct cannabis research and clinical studies in Israel than in any other country in the world," said Kaye.

Tikun Olam is the first and foremost supplier of medical cannabis in Israel, and one of the leading medical cannabis companies in the world. It has developed a range of proprietary varieties — perhaps up to 230 — used in clinical medical trials.

Kaye pointed to the Israeli-pioneered drip irrigation technique as an example of old technology helping marijuana growers. "Companies like Netafim can adapt their technology to our needs," he said. "For them, cannabis is just another crop."

Using Flux's smart device, Eddy, "you can dial in your favorite strain and Eddy will become your easy button, making that strain grow to perfection and according to your medical needs," Flux CEO Karin Kloosterman told ISRAEL21c.

In addition to decriminalizing personal marijuana use, the Israeli government is on a mission to regulate medical marijuana and make it more accessible and available by prescription at pharmacies.

"Cannabis should be considered, so far as possible, in the same manner as any other medicinal product, requiring supervision and regulation in order to protect public health and welfare, even when taking into account its special characteristics – being a plant rather than a product manufactured in a laboratory or factory," according to the Health Ministry's Medical Cannabis Unit.

Both Israeli and international pharmaceutical companies are working with the Health Ministry, universities, medical institutions, and researchers to develop cannabis-based pharmaceuticals and treatments.

"Medical cannabis is increasingly being used for a variety of indications, such as reducing nausea during chemotherapy and relieving pain and muscle spasticity in multiple sclerosis patients. Development of state-of-the art delivery systems for the active ingredients will undoubtedly pave the way for a wider variety of clinical indications for these types of drugs," Yissum CEO Yaacov Michlin told ISRAEL21c in 2015.

Kalytera also inked a multimillion-dollar deal to purchase Talent Biotech of Bnei Brak, a startup that won the pitch event at CannaTech 2016.

Once the cannabis has been grown, extracted, and formulated, it needs a delivery system for proper dosage–a tablet, patch, nasal spray, or cigarette, for example. And that's where Israeli ingenuity comes in.

Israeli-American company Cannabics Pharmaceuticals is working to put the medicinal compounds of cannabis into a sustained-release capsule in standardized doses.

And Australia-based PhytoTech Medical is developing an adhesive patch with medical cannabis, based on Hebrew University technologies.

"Israel is way ahead in adaptable technologies for the industry in an industry that hasn't yet created its own technologies," said Kaye. 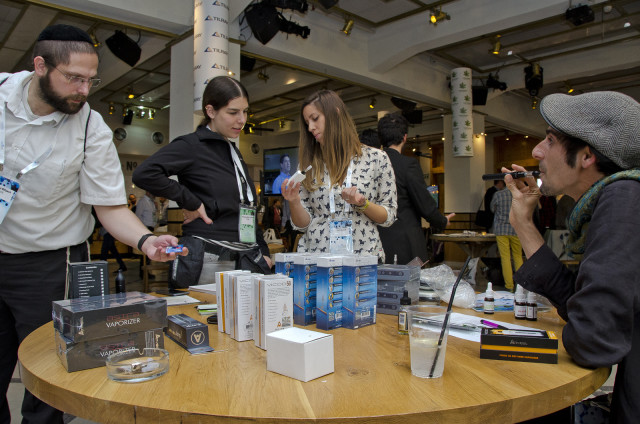