So after my last grow, I went out and treated my plants to some new equipment, having changed from my last grow in a 4x8 tent into a permanent room.

The room is 6ft x 9ft of which 6ft x 6ft is growing space. I built a sloping 6x6 fibreglass drip tray as i found water containment a pain previously, leading down to a trough which I find easier to clean out and mop up.

I'd fitted a reverse osmosis system, as I live in a really hard water area. Was overjoyed to find my ppm readings at zero and my ph at 5.9 when I first ran it ...

I bought a 12,000 btu wall-mounted split a/c unit as I really wanted to get the temps right, particularly with the new LED's I'd bought: 6 x 100w Veros as I'd read they ran rather hot when they were turned up to 100% (which they do).

I ran these in conjunction with 2 air cooled 600W hoods, all mounted on an aluminium frame I'd built. All told it must weight 35kilos ... and mounted onto a Jupiter light mover.

I'd made most of these purchases as I was keen to run CO2 to see what difference it would make ...

Strains:
Dr Krippling - The incredible Bulk
Feminisedseeds - Chronic, Big Bag, Easy Kush, Double Berry, Critical Auto, OG Kush, Blue treacle auto
Bomb Seeds - Atomic
Critical Mass Collective - Auto Massassin
Fast Buds - LSD-25 Auto
The eagle eyed amongst you may notice that I'm growing nine plants and germinating 11 ... well, I monumentally cocked up at germination and got all my seeds mixed up (my bad!) and even worse, germinated in too warm an area. Two sprouted the next day (which turned out to be two of the autos) .... and then nothing for a week. So I moved them into a cooler area and a few more of them spouted, added another couple or three seeds with all sprouting. SO I was left with nine seedlings, and having no idea of which seed was which - or which seeds failed to germinate. Scientific huh?

Medium:
Coco 70% Perlite 20% Claypellets 10%
Added: worm castings (maybe a kg in total); lime pellets; mychorrhizae additive; blood & bone additives; trace elements
I'm growing in the 25l(?) autopot trays; manually watering for the first month, then changing over to the autopot system (but not running it full-time ... turning it on and off at the master tap to dry out the root areas more between feedings).

Feed:
Veg: Canna A & B; Calmag; Seaweed extract; silicon; H2O2 (plus one manual trace element top-up)
Flowering: some Canna flowering (leftovers); Ph Bulk and as above
Ph up or down as needed ... 5.9 constant (apart from when I showed some nute deficiencies and I moved up to 6.2)
This grow I'm keeping my ppm below the 1000 mark, except maybe at the peak of flowering or if the plants needs it. At seedling stage, I was feeding at 500 ppm moving up to 650 (alternating feed and water*); during veg I was feeding 800ppm moving up to 1000. I intended to continue alternating feeding with watering, but the plants started to show some nutrient deficiencies* so I moved to feeding only. I think much of this nutrient deficiency was actually due to me using RO water exacerbated by big containers with smallish plants ... took a long time for the pots to dry out, and hence went a long time without calcium, magnesium or any nutes ...

If anyone's interested, I'll post this as a catch-up now, and upload some photos and another post on the early stages of the grow shortly ... and then you can see the plants as they are now ...
J

So following on from the mess-up in germination (Started Aug 1st), I put the seedlings into peat plugs, into a humidity tray and under 2x100w LEDs ... hoping that the two weeks apart that they germinated would even itself out over germination ...

Once they'd got to a decent size, I then put the peat plugs into 4" rock wool cubes and carefully hand watered for three weeks to encourage the tap roots to grow, and for a decent root system to emerge. By this stage, I was using 4 x 100w LEDs to cover the area.

I up planted up when roots started to emerge, into their final containers, 25l autopots.

I fimmed at the forth set of leaves for each plant. The two early spouters reacted in totally different ways to this ...one went nuts and started growing really quickly, the other took much longer to recover and then they both started showing flowers.

This is the earliest photo I have of the grow and is September 9. The auto flowers are centre and back right and are 5 1/2 weeks from seed. Massive difference in size.
Am now sure that the seven others are all photos ... but what their strains are ... I'll try and work out over the remainder of the grow ... they are between a week and two weeks behind the autos 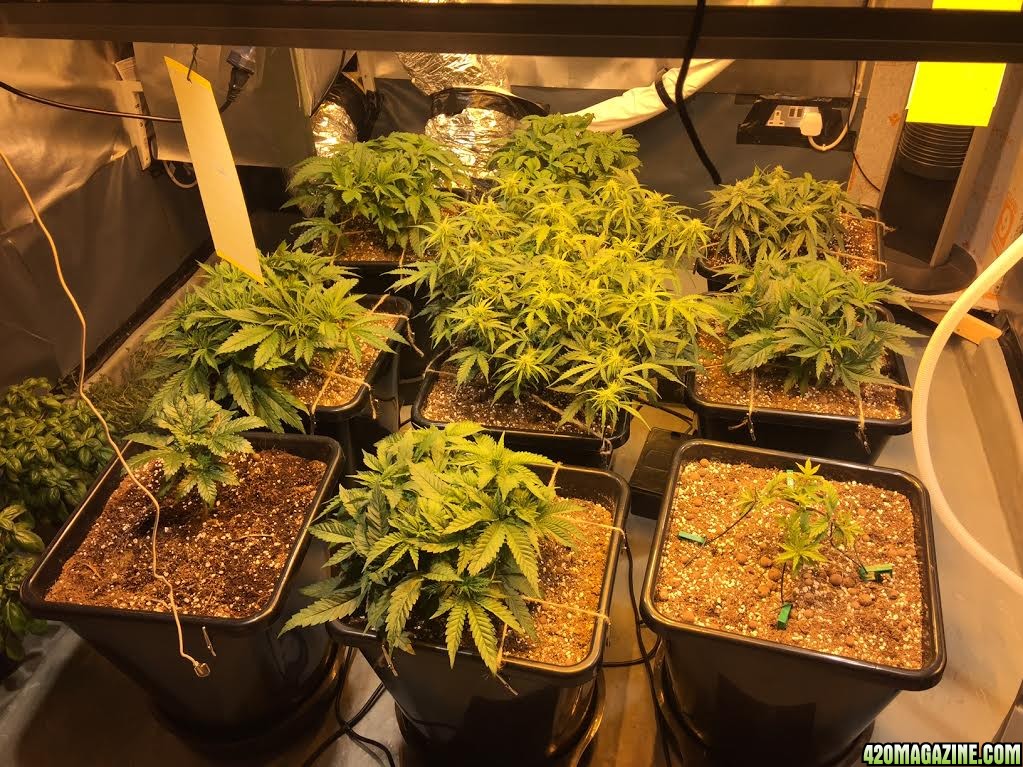 At this stage, they're on a 19/5 light schedule and this is the day I drove to get my CO2 tank.

You may notice the yellow stickies top right and left ... I'm pretty sure the bugs I had were introduced by bringing supermarket bought basil and coriander pots into the room ... I won't be doing that again ...!
J

These are the photos. Just given them a slight trim as they were getting really bushy in the middle and I was finding a few water droplets on the leaves. Removed a few damaged leaves that showed a calcium deficiency (most due to RO water I think). Possibly a little bit of light burn on some areas 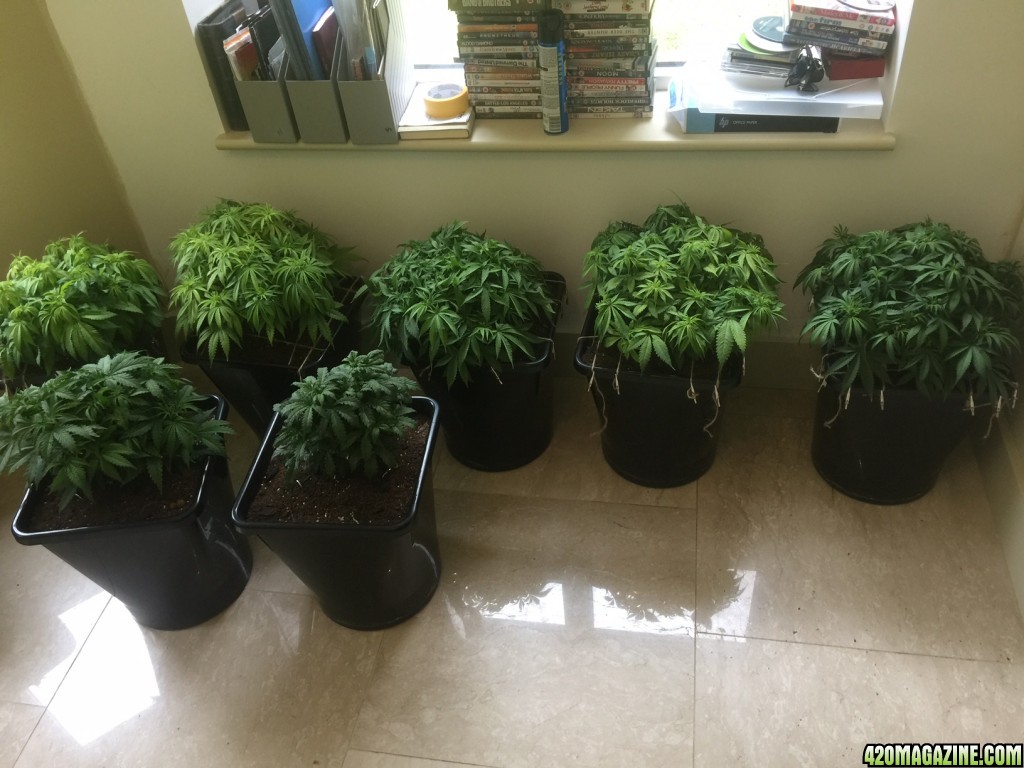 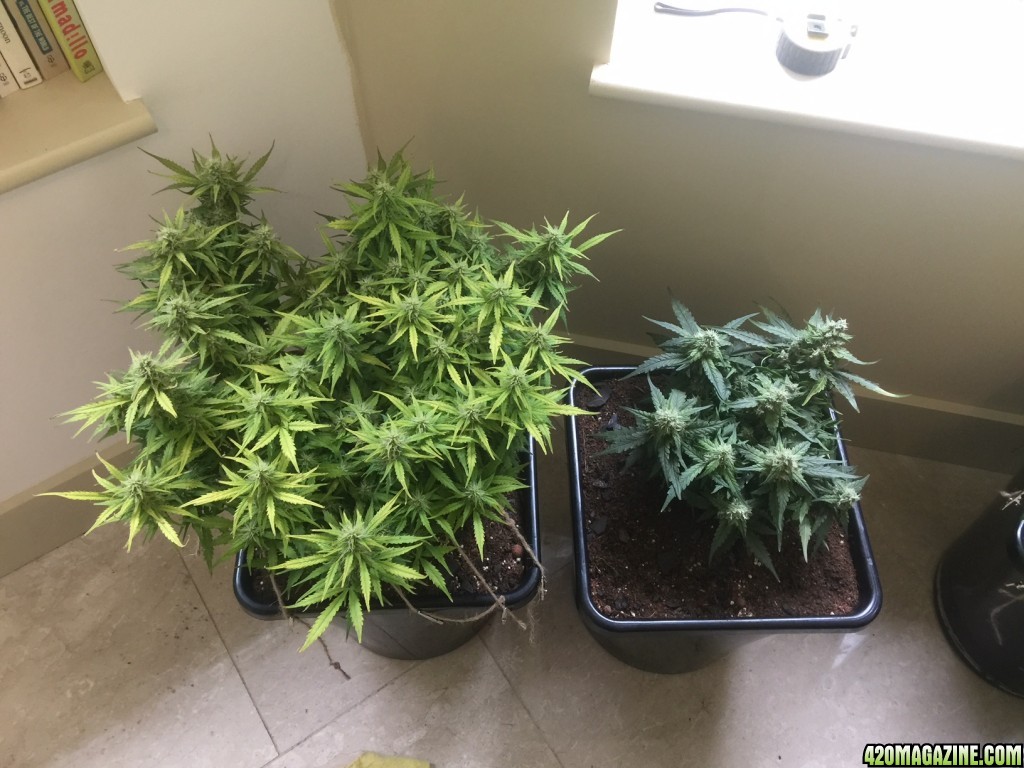 By now, I'm using 6x 100w LEDs and 2 x 600W dual-spectrum bulbs a) as I don't have flowering bulbs and b) because I also figure the dual spectrum might help the flowering autos. The bug problem has gone ... I took all the plants out of the room and sprayed the room with strong fly killer and insecticide. And checked the plants individually as I trimmed them.

As I started using CO2, the plants have been able to handle much higher temps, so the a/c was set at 27, and the room steadied out at about 29C ... peaking from time to time as high as 31C. I didn't notice much increased rate of growth at first .... but then I remembered the relative humidity chart and increased humidity to 65% (I'd lowered it to 50% to help the autos which were flowering). That's when I started to notice the increased growth rate ... I feel the photos would like it even higher ... but sadly the buds on the autos were starting to feel really damp so I had to back off and keep it at a max of 65%.

So to the present day and to recap ...
the 2 autos, front row right and centre, are now 8 wks 6 days (62 days from seed) and are two of the following: Blue treacle, LSD-25, massassin or critical
the photos are 8 days into flower (5.5 to 7 week veg) and are the following: incredible bulk, easy kush, big bag, chronic, double berry, OG kush or atomic

Just flushed the autos with flora kleen ... tricks are all milky on the runt plant and 90% milky on the larger one. Will continue to give the just RO until the chop, hopefully in a few days ...

The photos are drinking heavily ... so back to alternating with RO water. 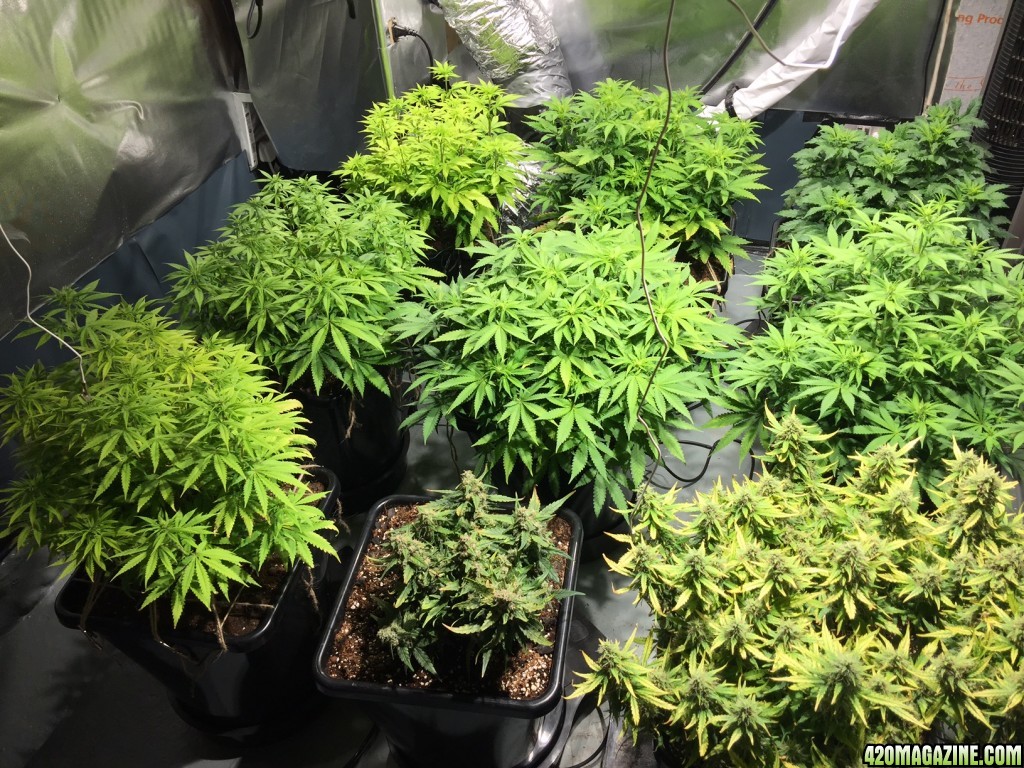 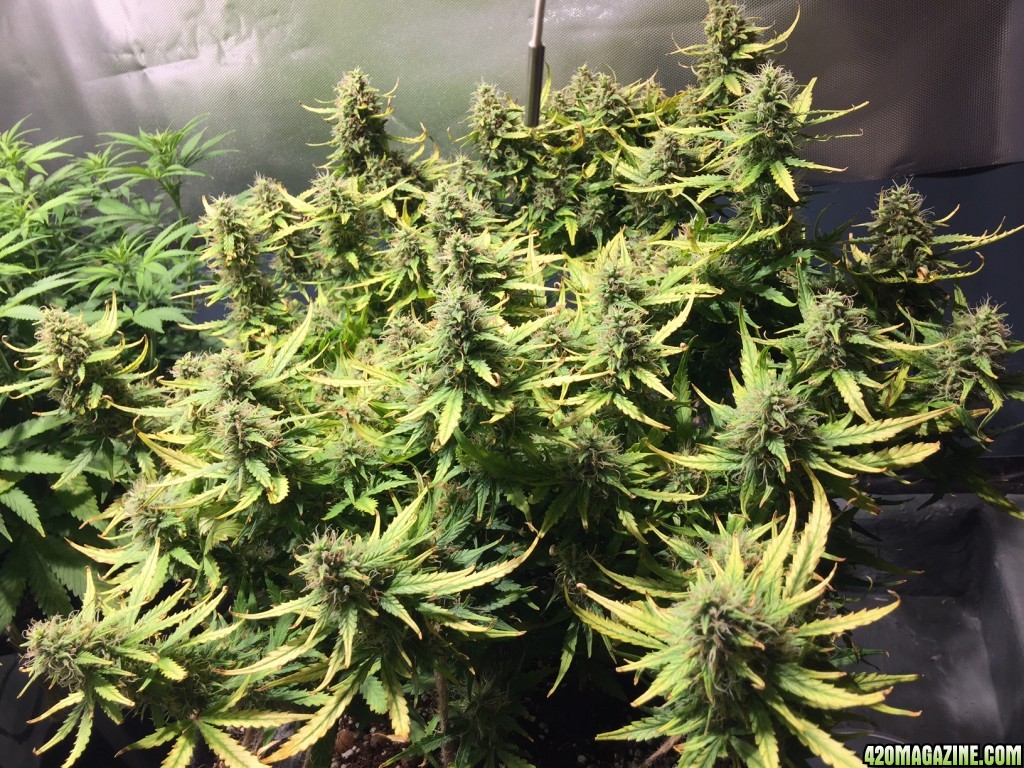 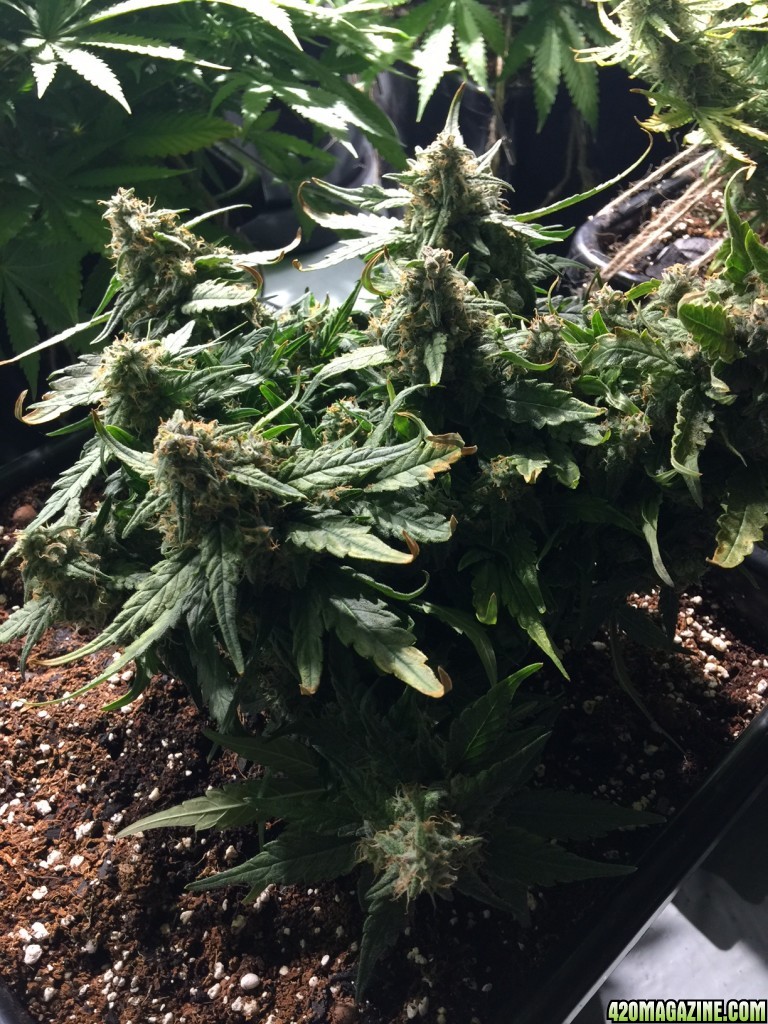