Desert Hot Springs, a windswept hamlet in the California desert 100 miles from Los Angeles, markets itself as a spa town – a laid-back complement to neighboring Palm Springs. Regionally, its reputation includes low rents and high crime rates, although residents with deep-seated community pride are quick to point out that the crime rate dropped 18 percent last year.

In October 2014, Desert Hot Springs became the first city in California to allow the commercial cultivation of marijuana. A flurry of land speculation began on the 1,400 acres open for growers. The city, on the brink of insolvency in 2013, boasted that it could double its $14 million budget on cultivation tax revenue alone.

Three years later, three facilities are operating. The harbingers of growth have arrived – a few dozen new jobs, a handful of professionals purchasing houses and nearly $1 million in tax revenue in city coffers this year.

But as marijuana has become part of Desert Hot Springs' identity, unexpected coalitions have formed: The police chief sits on a board alongside a grower he tried to "squash" in a neighboring town. The cultivators sponsor Easter egg hunts and veterans' memorials. Some have given money to the local Veterans of Foreign Wars post and offered donations to the police department.

Jason Elsasser, the would-be proprietor of the Yucca Valley dispensary, had been growing marijuana under California's medical regulations since 2007. He'd owned real estate and construction companies, but when the housing market crashed, Elsasser turned as many as eight of his foreclosed properties into grow houses.

"I had a good reputation in town as a businessman, I was a member of the Rotary club, and I decided in 2013 to, I call it, 'come out of the closet,'" Elsasser said. "If you're in the business, you're an advocate. If you're investing your money and your time into this industry, you'd better be prepared for a little bit of blowback."

And blowback is what Elsasser got. One author of a letter to the editor in the local paper urged marijuana users to "seek an alternative for your soul's sake." Another called him "unscrupulous." The dispensary measure was soundly defeated, 57 percent to 43 percent.

A year after Mondary relocated to Desert Hot Springs, Elsasser did too. He plans to have his CV Pharma grow facility operational by mid-2018.

"They talk about these paradigm shifts. Well, I truly lived one," Mondary said. "I'm the captain at Yucca Valley, and I am doing everything I can to squash Jason Elsasser like a bug, and shut down all of his business operations, and all of these things one day – and the next day I'm the chief of police (in Desert Hot Springs) and saying, Jason, how can you help us?"

For Elsasser, the change was "surreal," he said. "I went from extreme opposition... to people asking me if I would be on the advisory board to the city to help them make decisions with cannabis-related matters."

Mondary sits on that advisory board too.

What changed Mondary's mind about cultivators? Their professionalism, he said. Unlike the gray-market growers he'd dealt with in the Mojave desert, these businesses had plenty of capital and actually wanted to comply with the regulations Desert Hot Springs had created.

Elsasser said he "was sick of living in that gray area." To operate more legally – complying with local and state regulations, if not federal ones – felt like a relief.

"I don't want to say everybody's getting together and singing kumbaya, but the interests align here," said Daniel Yi, communications director for MedMen, a West Hollywood-based cannabis company aiming to open a cultivation facility in Desert Hot Springs in 2018. "If you want to be on the up-and-up, be a mainstream institutionalized industry, you need to work with government. We are at a very important point in that evolution."

Operators of MedMen sit on the board of the DHS Cannabis Alliance Network, a coalition of cannabis companies with a local presence. So does Elsasser. In its yearlong life, the group has hosted an Easter egg hunt and a family fall festival, and its members have donated to the Police Officers Association.

It's an attempt to burnish the reputation of the cannabis industry, countering the "stoner" image and replacing it with a philanthropic, even family-friendly, one.

And it's working because, in part, Desert Hot Springs hasn't had many donors.

"Philanthropy has always been a problem here in town," Mayor Scott Matas said. "It's always reaching across the freeway," to Palm Springs and neighboring wealthy cities. "Desert Hot Springs isn't as sexy as other cities when it comes to actually giving money."

Matas, a Republican, was staunchly opposed to marijuana when he joined the city council in 2007. He said the drug destroyed a marriage in his family, but also helped ease the pain of a friend battling cancer.

Industry members, including Elsasser, expected Matas to oppose the cultivation ordinance council voted on in 2014. But he put the moral decision aside, he said, and focused on the money.

"The things we could do with that money, the cops and firefighters and streets, all the things we've had trouble financing in the past could really..." Matas trailed off. "We have parks that need to be built and more officers in the streets. There's just so many things that we can do."

And the cultivators have money. In addition to the nearly $1 million Matas estimated cultivators would pay in taxes in fiscal year 2017, he thinks they've donated about $100,000 to community organizations, including nearly all the funding needed to bring the Moving Vietnam Wall, a memorial to Vietnam War veterans, to Desert Hot Springs in June.

"It's no secret that the city has financially struggled," Mondary said. Traditionally, he explained, the city can't afford Fourth of July fireworks, so local businesses sponsor them. When no one offered in 2016, the Cannabis Alliance Network threw a Fall Festival instead – bands, food, fireworks and no mention of marijuana.

"It was a great event that would not have existed if it wasn't for CAN," Mondary said. "They're getting involved in the community, and not just giving their money, but giving their time as well."

Mondary is clear: He still thinks legalization of recreational marijuana is a bad idea. He anticipates more drivers under the influence, more break-ins at dispensaries and continuing gang activity.

But Desert Hot Springs voters invited the industry here, he said, and his job is to keep them safe regardless. To do so, he needs growers and sellers to be partners, not adversaries.

MedMen's Yi pointed out that medical marijuana has been legal in California for 20 years. For at least 15 of those years, dispensary customers waited in shadowy lobbies with Plexiglas-protected windows. Only recently are they emerging – and only a handful of communities are willing to embrace them so far.

"I think we do sometimes maybe go out of our way to show people that we're normal like everybody else, but I'll say this – we are normal like everybody else," Yi said. "It's being public and wearing that emblem and saying, 'I am with the marijuana business, I am with a marijuana company, but I'm here to participate as a member of the community,' and having no stigma, no shame associated with it, because there shouldn't be." 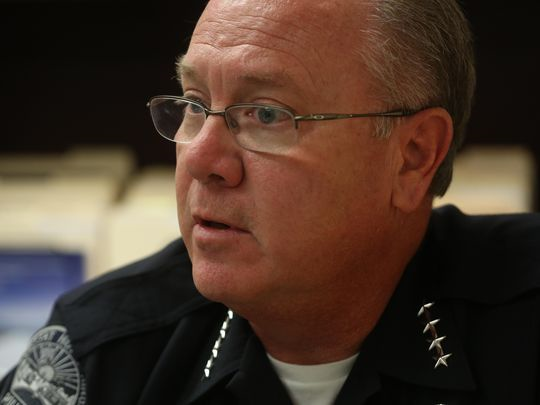