The patient was a 31-year-old, otherwise healthy woman (160 cm, 46 kg) suffering for about 20 years from a painful chronic cystitis, with an aggravation of symptoms in the last weeks. A multitude of different analgesic (opioid and nonopioid) medications, physical therapies, psychotherapies (individual and group therapy), as well as acupuncture, magnetic field therapy, and homeopathic therapies, were without any benefit. Invasive procedures (spinal cord stimulation or epidural catheter) were refused by the patient. Following an extreme argumentation of symptoms (chronic, severe burning, score on 100-mm visual analogue scale [VAS] 95-100), the patient was offered a cannabinoid. She was given 1 mg oral nabilone (Nabilone, Torrex Pharma, Vienna, Austria) every day. Although she reported a redustion of pain (VAS 60) after two days of therapy, she also suffered from psychotic sensations, hallucinations, confusion and bad dreams. A reduction of dosage to 0.5 mg per day did not lead to reduction of side effects. A further reduction to one dosage every second day caused an increase in pain perception.

Because of the satisfactory effect on pain , we attempted rotation of the cannabinoid. Therapy was switched to dronabinol (Marinol, Banner Gelatin Products Corp., Chatsworth, CA) 2.5 mg orally daily. Pain perception was further reduced (VAS 30) and side effects were greatly diminished. The patient only reported a `strange feeling`. She was able to sleep well and was not impeded in daily life. When the dronabinol dosage was reduced to 2.5 mg every second day, pain perception remained low and side effects almost vanished. The patient was able to again take up her profession.

This clinical picture has remained stable for six month. This case represents the first report of a successful cannabinoid rotation in an effort to maintain analgesia while reducing side effects. Whereas the analgesic effect of cannabis is still controversial, a multitude of case studies report a high efficiency of this substance for pain therapy. Following other ineffectual medications and therapies, cannabinoids are often tried. A positive effect is often counterbalanced by severe side effects, however, which may necessitate a discontinuation of therapy. In the case described, we report severe psychotic side effects, despite an improvement of pain perception. The symptoms were so severe that the patient was unable to fulfill her professional duties and even could not use an elevator.

Similar problems are well known for opioid therapy. With these drugs excellent analgesic effects can be counterbalanced by severe side effects, which can necessitate a disruption of therapy. In such cases, rotation from one opioid to another has proven to be successful. While the exact cause for the success of such a rotation remains unknown, the different affinity of opioids to an individualÂ´s genetically determined mix of m-receptors and the subunit MOR-1 is suspected to be responsible.

Whereas both cannabinoids used for this patient presumably exert their action on the same receptors (CB-1 und CB-2), rotation proved very successful for the reduction of side effects. The analgesic effect was improved. Thus, the effect between the two substances was quantitatively and qualitatively different.

We can only speculate if the success of this cannabinoid rotation is caused by individual genetic differences at the receptor level or different affinities of the two substances to the receptors. However, we can state that, similar to opioid rotation, rotation of cannabinoids is a promising therapeutic option. 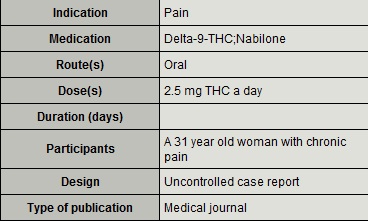